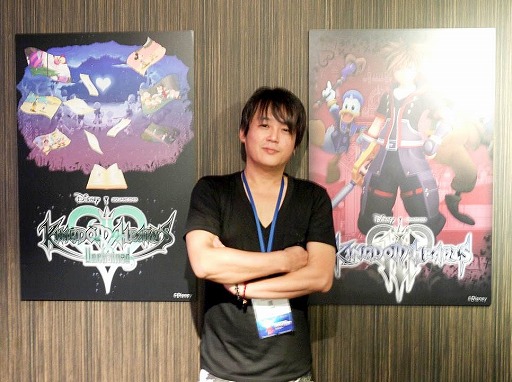 4Gamer: Thank you very much for speaking with us. At E3 2015 you released a trailer for Kingdom Hearts III, which is the first new information on it in a while, so let's start by talking about that.

There were quite a lot of scenes of gameplay in this trailer, so we were finally able to see what sort of game it is shaping up to be. What are the features and points you'd like us to pay attention to for Kingdom Hearts III?

Tetsuya Nomura: When it comes to Kingdom Hearts, that would have to be the story and the battle, wouldn't it. I still cannot say anything about the story, but there were a lot of new flashy techniques in this trailer, so I think I was able to convey that end of things.

4Gamer: There were various techniques that strongly resembled theme park attractions, weren't there?

The train, ship and tea cups and such decorated with lights are a skill called 'Attraction Flow'. There's also another feature where the Keyblade turns into things such as a chariot, or a double bow gun that transforms further and shoots magic bullets. That's a system where one Keyblade can transform into several phases, and we have created many more transformations that weren't in the trailer.

4Gamer: It sounds as though even from within the 'action' format battling has become quite varied.

Nomura: On top of that there are also techniques like the 'summon' command and other abilities of Sora's, so there are quite a lot of choices when it comes to battle. There was a scene in the trailer where Sora ran up a wall to fight - that freerunning is also something you can connect techniques to for bold moves.I think that an exhilarating feel is important to battle in Kingdom Hearts, so we are making battles that you can enjoy by unleashing lots of crisp techniques.

4Gamer: Kingdom Hearts III is the first title in the series to release on PlayStation 4 or Xbox One. Are there any features you included specifically to take advantage of the new hardware?

Nomura: Being able to move around flashily on large maps, like in that scene I think there is where Sora jumps off a cliff, is something we could do because of the new hardware. Up until now there have been load times when moving between areas, but now they connect seamlessly and the maps are also bigger, so you can do even flashier actions.Also, the AI during battle has been enhanced quite a bit. There was that scene where Donald and Sora are moving with Goofy has he wields his shield - you don't only execute that sort of thing yourself, Goofy and Donald can invite you into it too. On the other hand, the enemy AI is also more advanced, and we are also including the element of mutual enemies working together, so for example they can join together to charge at you and things like that.

4Gamer: Even though you weren't able to announce the release date this time, how is development coming along?

Nomura: The gameplay and world assignments have been decided, and the foundations are already done, so now we are at the stage of putting our effort into all details.

4Gamer: We are looking forward to more information. Kingdom Hearts is a title that is very popular overseas. What was the reaction on-location like at E3 when the trailer was shown?

Nomura: The reaction was amazing. There are so many fans overseas, I think perhaps it rivals that of Final Fantasy in popularity.

4Gamer: Why do you think Kingdom Hearts has earned so much popularity overseas?

Nomura: I have no clue (laughs).

4Gamer: What an immediate reply (laughs).

Nomura: I wonder why it's so popular? I think maybe the Disney look means it’s familliar and easy to feel affection towards for people overseas. But, I've spoke with people at Disney before who told me that the story of Kingdom Hearts is very Japanese.

4Gamer: Perhaps there's a feel to it that isn't in foreign games that projects appeal.

Nomura: Also, it's been about thirteen years since the first Kingdom Hearts title came out, and about ten years since KH2, so I've heard quite a few people say "Kingdom Hearts was the first game I played." Perhaps these games mean a lot to fans because they are part of their childhood memories.

4Gamer: You mentioned ten years just now. Why did there end up being such a long gap between KH2 and KH3?

Nomura: I personally didn't intend for so much time to pass after KHII. When people around me said it'd been ten years, I was so surprised, like, has there really been such a gap? See, I've been working on Kingdom Hearts titles this whole time. But in the midst of making spin-offs I ended up with fans saying "Another spin-off? When is KHIII coming out?" and yeah, ten years had actually passed. This is bad, I thought.

4Gamer: So that's why you decided to develop the long-awaited legitimate sequel.

4Gamer: You aren't only working on development of Kingdom Hearts III, but also Kingdom Hearts Unchainedχ (hereon Unchainedχ), aren't you? Although Unchainedχ is set the furthest back of any game in the series, it connects to KH3. How does that work?

Nomura: In the world of Kingdom Hearts so far the phrase 'Keyblade War' has come up a few times, which refers to a legend regarding a huge war fought between Keyblade Wielders. Even in the trailer we just released for Kingdom Hearts III, those two boys are talking about the Keyblade War. The world of Unchainedχ is set during the age just before that war. If you play Unchainedχ you will enjoy KH3 even more, so I would by all means love for you to play it while you are waiting for KH3 to be released.

Nomura: When I play social games, I hate things that are a bother. Sometimes I think, 'this could have been done with just one tap.' So, we are taking care to try and make something that won't be stressful. I especially hate getting frustrated with load times, so we in the development team have been getting passionate, going, "Fast and light! Let's aim to make the fastest game ever!"

4Gamer: With the battles of Unchainedχ, there's the 'one turn finish' element where you try to end battles in short turns. Is that also the result of trying to cut down on bother?

Nomura: Yes, that's right. Any process that requires lots of compact operations on a little screen is going to be a bother, right? We consumer developers end up wanting to keep fiddling with things. In the beginning I was actually thinking of going with an even more different combat system, like fighting by tapping in time or something like that. But that was stupid (laughs).

4Gamer: It seems that polishing your tactics in the opening setup and thinking of how to defeat the enemy in one turn for points will be a fun part of battling.

Nomura: Before, there have been times when I played other smartphone games and thought, "where is the catharsis (for the players) meant to come from?" And then, the bit that made me think "from here!" was when you did something and points started increasing with incredible vigour. When it comes to the operation, it's important to get a response that feels good.From the beginning, in Kingdom Hearts we directed it so that when you defeat enemies prizes come bursting out, and we wanted to translate that kind of good response into a smartphone game. So then, the good feeling from one-shotting an enemy with a one turn finish is incorporated as one of the charms of the battles of Unchained χ.