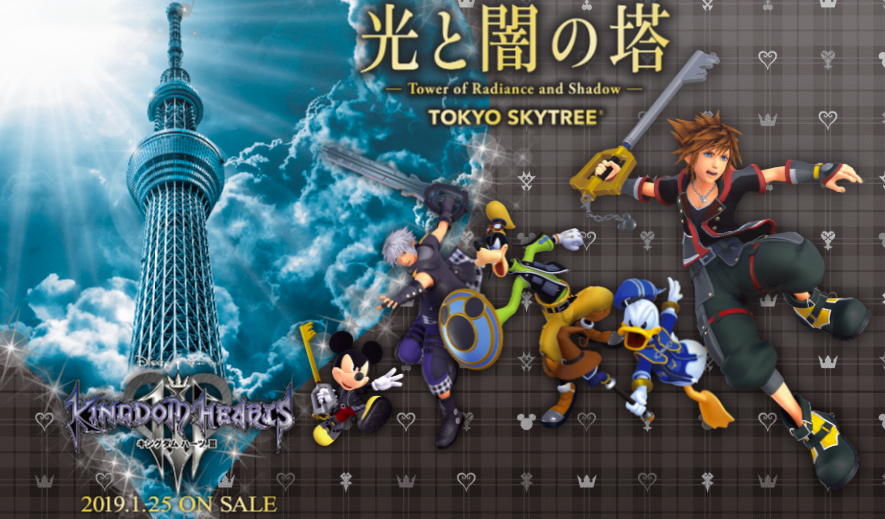 It will take place from Tuesday January 8, 2019 through Sunday March 3, 2019 at the Tembō Galleria in the Tokyo Skytree tower, 450 meters above ground. The event will take up the upper half of the tower, showing off worlds and characters throughout the series. There will also be a stamp rally, and screenings at the Skytree Round Theater inside the tower, using 255° out of 360° of the huge screen. The screenings will be 7 minutes long and follow the following timetable:

Screening date and time may change without notice.

On January 8, certain areas within the Tembo Deck (where the event will be taking place) will be restricted from around 3:00 PM JST in order to prepare and organize an interview for the press. The placement of this press event right before the start of the Kingdom Hearts III event suggests that they may be related.

A unique lineup of merchandise will also be sold at the event, including some event exclusive items! You can see them below.

You can find pictures of other merchandise at the event below.

To learn more about the event, read our translations of the press release here and visit the official website.

Translations used in this article were provided by KH13 Staff @Mio-chan .

Update [January 8th] The Premium Theater footage has been recorded thanks to Game Watch! You can watch it below.