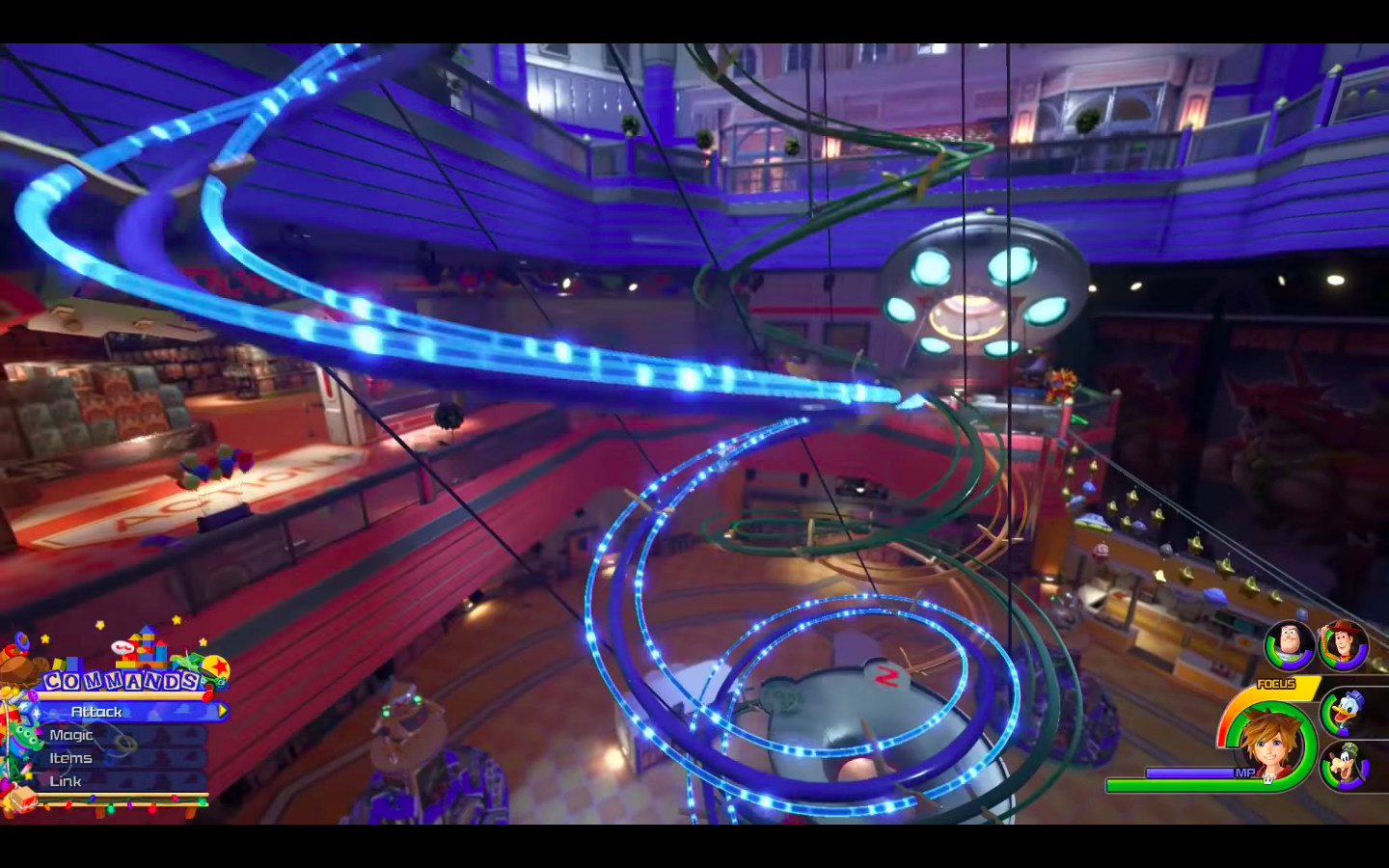 Nomura talks about working with Disney to find the right balance, the worlds' vertical expansion, and recap videos added at the start of Kingdom Hearts III

VG247 has recently published Alex Donaldson's interview with Kingdom Hearts series director Tetsuya Nomura. Here, he talked about having found the right balance while working with Disney, their approach to world expansion, recap elements and more in Kingdom Hearts III.

In regards to his approach in directing Kingdom Hearts III, Nomura said he hasn't changed much, not unlike in his previous interview with Donaldson back in 2013.

I have not changed the way I develop since the first game and I have continued to do so in the same style I always have for Kingdom Hearts 3. I have not really considered the kinds of complicated balancing issues that everyone imagines, and the game stories are simply the result of me making what I wanted to make freely.

Nomura also spoke about seeing the positives of working with Disney's restrictions.

It goes without saying that the freedom of movement I have on Kingdom Hearts is different from that on other titles because Disney oversees and edits things. But in a sense, I feel that working freely within those boundaries may have produced the balance we have today.

Infact, the Pixar team working on Kingdom Hearts III had a lot of praise for Kingdom Hearts III's development team during the Kingdom Hearts III Premiere Event. Tasha Sounart, the Associate Creative Director at Pixar Animation Studios, and the Pixar Story Supervisor Jason Katz, spoke about the success of Toy Story's and Monsters, Inc.'s representation in the game being owed to the efforts spent in the back and forth between the studio and Square Enix.

"I’ve been a Kingdom Hearts fan for a long time. I played the first two games and a couple of the handheld games – and so just as a player I always wanted to see Pixar worlds represented.

"Rob Rowe, our director in the interactive group, just came up to me one day and said that they were thinking of adding Pixar worlds to Kingdom Hearts 3, and what did I think of that? I was like… er, yes please! I really want to work on this! So, yes, I was super excited.

"Square Enix’s process is very similar to ours on films, where they’ll go all the way from script to storyboard to layout to blocking animation – y’know, it’s a very similar path that all the scenes take, and we were involved from the very beginning and giving notes on the script just to make the characters feel authentic to how they would actually act in those situations.

“They have such an attention to detail and really care about getting things right. That really is very similar to Pixar, where we will have a meeting where we’re all obsessing over this one little shadow or something [laughs]. The way that Square Enix is – they really try to get everything as good as they can get it, and so we really appreciated that when we were working with them.

“Just seeing Buzz and Woody running around with Sora… I dunno, I’ve just wanted this for a long time – it’s so cool!”

“That’s an important thing. It’s an easy thing to say and a tough thing to realize. Like – what is the monsterisation of Donald? What does Sora look like as a toy? But it’s so important, because not only does it move the story line, but it helps buy them into the world – there’s a reason for them being in that particular story.

“All of a sudden the degree of notes and the amount we’re gonna push up our glasses and really dig in on the details… it’s gonna raise. Because if it looks like the film it needs to move like the film and feel like the film.

“A big part of the Toy Story universe and those films is nostalgia – nostalgia for toys that we remember growing up, or that feeling of playing with a toy as a kid. I remember having really great conversations about… challenging the folk at Square Enix, asking ‘What were the toys you remember? What were the toys from your childhood?’

“Just like making our films, that takes time. It takes time to establish trust, to understand what we can both collectively bring to the table to make the end product reach the ideals we have.”

When Nomura was asked about what Kingdom Hearts III would have been like it had it been developed for the previous generation of consoles, Nomura replied that he hadn't given it any thought. He simply talked about how the development team worked to make new players and those who have forgotten the series' previous experience catch up to the story in Kingdom Hearts III. He stated that recap videos will be added at the start of the game, along with other elements throughout the game to further players' understanding of the story.

There aren’t many examples in gaming, but I think that there are cases of film and TV series where viewers can take an interest part way through.

We have included several elements in Kingdom Hearts 3 to explain the story and get newcomers up to speed the minimum required level of understanding, including a series of videos to explain the story so far at the start of the game. I would be delighted if people who played Kingdom Hearts 3 took an interest in the series overall and went back to play the previous games as well.

Nomura said that the quality, size, and depth of each world is prioritized over the overall world count, and that was greatly achieved through expanding them vertically. It is still not possible to make a simple comparison between the size of Kingdom Hearts III's worlds to the previous games' ones.

As we can now render the worlds in much more subtlety, the level of detail that is put in to them is almost impossible to compare to the previous games. In order to get the most out of each individual resource, we prioritized making each world more detailed over adding more of them this time round.

I think that by putting more emphasis into expanding the vertical aspect of the different levels, it gives a greater feeling that the space you play in has expanded. It is not really possible to do a simple comparison and say how many times bigger the worlds are compared to past ones, but I do think that you can have even more fun exploring all the different nooks and crannies than ever before.

Nomura also referred to Gummi Ships to have "symbolic significance" in the series, and restated that Gummi Ship levels in Kingdom Hearts III will have a higher resemblance to an RPG world map and include exploration and detailed customization.

Nomura concluded the interview by acknowledging that fans have a lot to expect and look out for in the final instalment of the Xehanort saga.

The original stuff has grown and multiplied over the years, so there are more opportunities where the player has to be exposed to it. The fans now have even higher expectations towards the original elements than before.