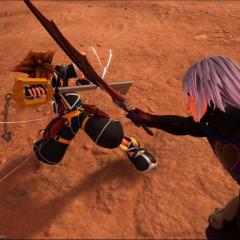 A glitch I ran into during a level 1 playthrough of KH3 where Xemnas stays on the field during Master Xehanort's DM, presumably because of stun lock. I could no longer lock onto Xemnas and the game refused to move out of the phase with the attacking keyblades, although he did eventually take enough damage to die anyways, which fixed the fight and allowed me to fight the remaining members of the Nort Court.

[[Template videos/front/view/comments is throwing an error. This theme may be out of date. Run the support tool in the AdminCP to restore the default theme.]]
IP.Board Videos by DevFuse
×
×