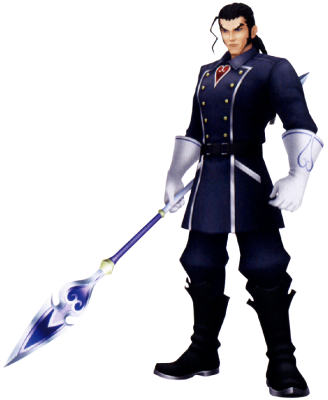 Dilan (formerly known as Xaldin) is a former member of the original organization XIII and one of the guards of the Radiant Garden Castle. Dilan is a very serious individual, taking his job as a guard very seriously but also possessing very noble qualities. However, during his time as a Nobody, his personality was drastically different, possessing a disturbing sadistic attitude towards Beast’s Castle and its residents and almost seeming to revel in their misery. As a castle guard, Dilan wields a single lance, while as a nobody he wielded six lances at once, using his power over wind to move them as he saw fit. He also had full control over the Dragoon nobodies. During the events of Kingdom Hearts 358/2 Days and Kingdom Hearts II, Dilan had taken the form of a Nobody named Xaldin, created after he lost his heart when the Radiant Garden was overcome by darkness. He was ranked number 3 in the original organization.