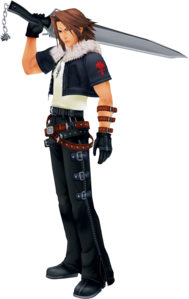 Originally from Radiant Garden, Squall escaped the devastation that took place in his homeworld along with Aerith, Yuffie and Cid, and found a new home in Traverse Town. Ashamed by his inability to protect his home, Squall forsook his name and vowed that he would never use it again until his home was restored to its former glory. A wielder of the Gunblade and an acquaintance of King Mickey, Leon has cemented himself as someone that others can rely on, and later on found purpose by being a founder of the Hollow Bastion Restoration Committee. He now spends his time working towards restoring Radiant Garden to its former glory, and seems to have mostly succeeded by the events of Kingdom Hearts III. Yet for some reason, he still insists that he go by Leon.