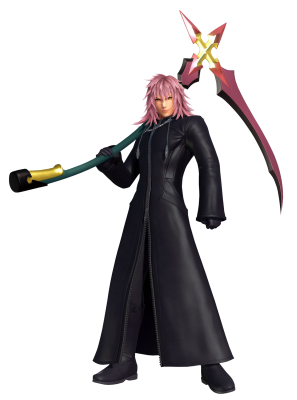 Marluxia is a member of the original Organization XIII and a current member of the “true” organization. Marluxia is cruel, vain and manipulative, using his time in charge of Castle Oblivion to plot with Larxene to take over the Organization with the intention of using Sora as a puppet. He was also shown to taunt others, such as Axel and Namine, furthering evidence of his arrogant nature. In battle, Marluxia wields a large scythe and controls the element of flowers. During the events of Kingdom Hearts 358/2 Days and Kingdom Hearts: Chain of Memories, Marluxia was a nobody created when he lost his heart to darkness at an unknown time. It is to be assumed that in Kingdom Hearts III he has returned to human form. While it has yet to be officially confirmed, it has been heavily implied that Marluxia’s human persona was a man named Lauriam, one of the Dandelions chosen by Ava to lead one of the new unions after the keyblade war in Kingdom Hearts Unchained X.