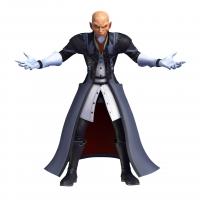 Master Xehanort is the main antagonist of the Kingdom Hearts series' Dark Seeker Saga, as well as a Keyblade Master. Master Xehanort is cold, ruthless, intelligent, and manipulative. He does not appear to care about anyone other than himself, proven on multiple occasions when he betrayed those close to him without a second thought. Master Xehanort comes from the Destiny Islands, the same world as Sora, Riku and Kairi. SImilarly to these three, when he was young he desperately wanted to escape the islands and see new worlds. Though his first official introduction occurred in Kingdom Hearts Birth by Sleep, Xehanort was first seen in the game's secret ending. However, we didn't see his face until the secret ending of Kingdom Hearts II Final Mix.