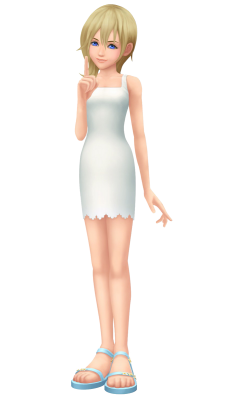 Namine is the nobody of Kairi, created when Sora became a heartless during the events of Kingdom Hearts as a result of Kairi’s heart resting inside Sora’s. She first appears in Kingdom Hearts: Chain of Memories as a mysterious girl whom Sora starts having memories of as he and his friends ascend the floors of Castle Oblivion. In reality, Namine was manipulating and changing Sora’s memories, an ability she has due to her connection to him. Namine is very quiet and timid, rarely speaking up for herself and often doing what is asked of her no matter how malicious. However, she has shown some bravery, such as when she stood up to Larxene in Chain of Memories and when she rescued Kairi from the Castle that Never Was in Kingdom Hearts II. At the end of Kingdom Hearts II, Namine is absorbed into Kairi, making her whole.