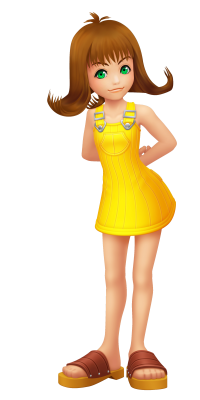 Selphie is originally a Final Fantasy VIII character and one of the citizens of Sora's home world, Destiny Island.  Although predominantly seen with Tidus and Wakka, she is also a friend of Sora, Kairi, and Riku.  After the world fell to darkness her whereabouts were unknown, but she did return once the islands had been restored.  Her personality is carefree and bubbly.  She also appears to be quite the romantic; she mentions the legend of the papou fruit to Sora and greatly expresses her desire to "try it sometime".