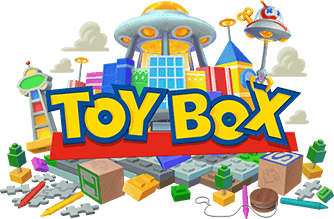 Toy Box is a world introduced in Kingdom Hearts III, based on the Disney/Pixar film franchise Toy Story. It features two settings: Andy's room, where the toys live; and Galaxy Toys, a multi-story toy store. A world based on Toy Story has been planned before, in a early design document for the original game concept art of a Toy Story world can be seen along side Disney Castle and Destiny Islands. Unfinished models of Woody and Buzz Lightyear were also found in the data of Kingdom Hearts 2.

Taking place after the events of Toy Story 2, Sora, Donald, and Goofy arrive to find that they have been turned into toys. They meet Woody, Buzz Lightyear, Rex, Hamm, and the soldiers, who explain that their owner, Andy Davis, and various other toys have gone missing. They decide to work together to find them, and journey to the Galaxy Toys toy store in their search. Once there, however, they run into Young Xehanort, who uses the Heartless to control other toys and attack the group.