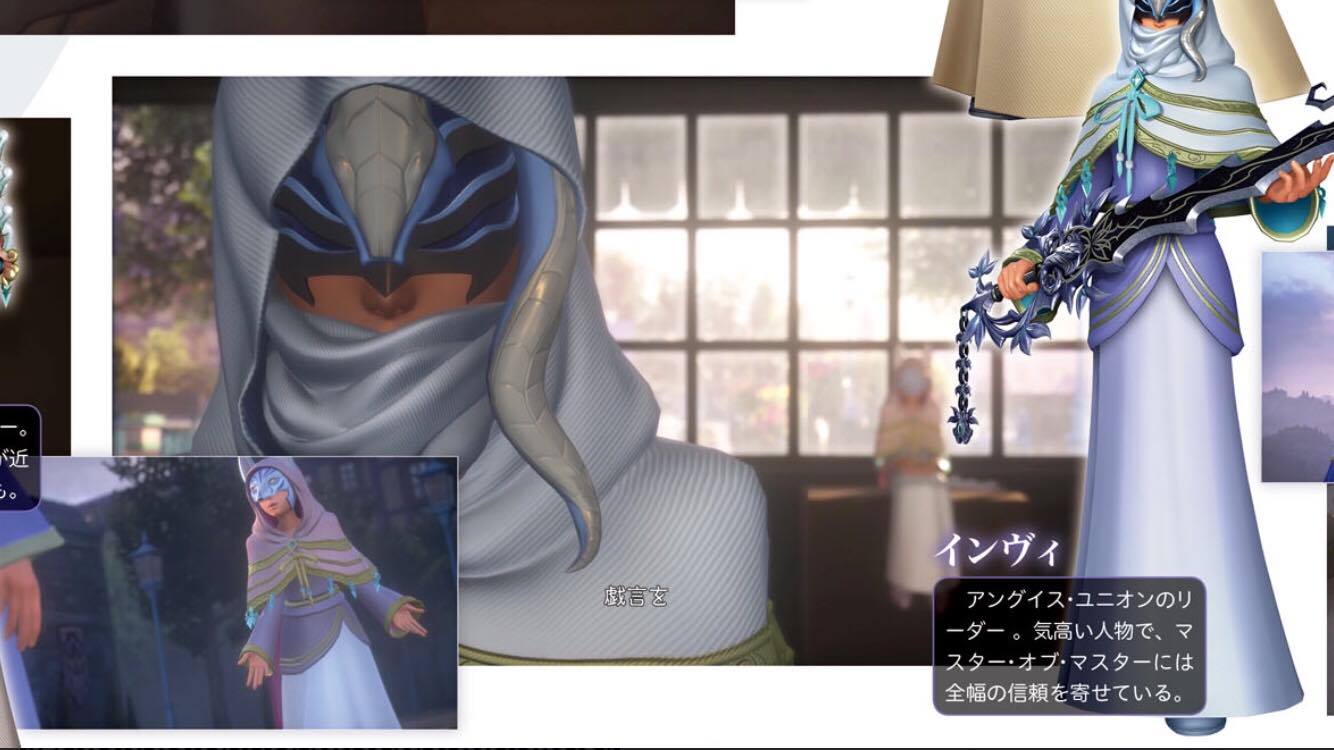 The feature also advertises the pre-order bonuses that are available for KH HD 2.8 FCP in Japan, and Kingdom Hearts Unchained χ for smartphone.

You can see the spreads below. Translations for the entire spread are available thanks to Catherine Mueller (nichiei.translations@gmail.com).

(Under Back Cover info)

When you reserve your package of [KH2.8], you'll receive one original mini acrylic stand. Also, if you use Amazon.co.jp and preorder a download, you'll receive a theme to use on your PS4.

This production holds three stories that are deeply related to the next game in the numbered series. We'll go into detail about two of them in this issue!

The truth that sinks into the worlds closed by sleep

[Kingdom Hearts HD 2.8 Final Chapter Prologue] (hereon known as KH2.8) can be enjoyed with three products in one, including all-new content. We'll first introduce the Nintendo 3DS game released in March 2012 as a remake.

Axel, who was formerly a member of the Nobodies in Organization XIII, once fought against the protagonist, Sora. He now appears as a human named “Lea.”

This is the town where all adventurers begin their journeys. Sora and Riku meet the characters of [The World Ends With You] at the start of their travels.

A world based on the film “The Three Musketeers.” Join up with Mickey and the others as they train to be Musketeers, and fight to serve Princess Minnie!

A world based on “Hunchback of Notre Dame.” Quasimodo has closed his heart, and has never stepped out into the world beyond the Cathedral bell tower. His encounter with Sora and Riku will change him.

A world based on the motif of “Fantasia,” when Mickey was still an apprentice under Yen Sid. Save Mickey from the darkness overflowing from the sheet music.

The stage of this game is the “seven sleeping worlds.” Here, you will find seven different worlds, mostly with Disney motifs. You can enjoy an entirely different experience in each place.

A young man with silver hair, and Vanitas, who was formerly defeated. The silver-haired man appears before Sora and Riku many times, and he throws words at them that seem to hold deep meaning.

A world based on “Tron Legacy.” Sora hoped to meet his friend Tron again, but now he is being controlled as “Rinzler.”

A world based on “Pinocchio.” Pinocchio is a wooden puppet who received life from a fairy. He was lured away by a man in a black coat, then stepped foot into a suspicious amusement park.

A variety of powers will help them both

In this game, you control both Sora and Riku, and you travel the worlds introduced on the previous page. The battles are full of incredible and refreshing action that the [KH] series specializes in. You can get involved in raising and strengthening “Dream Eaters,” and the appeal is in the huge amount of fun you can have with this content.

When you're playing as Sora, Riku is asleep. When the drop gauge in the bottom right corner becomes zero, Sora will fall asleep, and you'll switch controls over to Riku. Using this method, you'll proceed through the game playing as both characters. In the HD mix, the time between drops has been lengthened to twenty minutes, and it's easier to concentrate.

When you change characters, the points you've earned during your adventure disappear and are exchanged for various rewards. Sora and Riku are building each other up even while they're separated.

In the worlds of sleep, there are magical beings called “Dream Eaters” that feed on dreams. There are ones who will fight alongside you named “Spirits,” as well as ones that will attack you, the “Nightmares.” Defeat the Nightmares and gather materials to give birth to new Spirits.

You can raise Spirit parameters through touching them. In the HD version, the touchpad is more intuitive, and the types of Spirits have increased!

You can use quick movements as well as timed attacks. With these, you can slide on handrails, swing around on poles, and other movements in a wide array of attacks.

This is an action you can use to work with items in the field, enemies, and so on. What you can do and how you can use it will differ between the worlds. You used the bottom screen of the Nintendo 3DS to control it by touch, and you could see the results on the top screen, but on the PS4 it's been modified to use just one screen.

This is a tool you can use when the Spirits walking with you have filled their gauges. Join forces with the Spirits, and you can execute a large number of attacks.

On the PS4, by changing the command tabs on the bottom left and using shortcuts, you can execute link attacks more quickly.

This will be a brand-new theatrical production shedding light on the happenings on the other side of the story of the PC game [KHx] as well as the smartphone application game, [KH Unchained X]. The main characers will be the “Foretellers,” who gather Keyblade wielders and run “unions.” We'll learn more about their discord, as well as the mysteries of their world, in this must-see feature.

He is the leader of the Foretellers, and he passed on the Book of Prophecies. He does a lot of odd things, and nobody knows what he's thinking.

The Master of Masters has eyes that can see the future, and with that power, he created the Book of Prophecies. He handed down the Book to five of the six Foretellers.

The leader of the Ursus union. He is obsessed with power, and he sometimes acts recklessly in order to maintain his self-righteousness.

All of the Foretellers are Keyblade wielders. During Sora's story, the Keyblade was said to be a legendary weapon that chooses its wielder.

The leader of the Leopardos union. He is individualistic and a lone wolf, and sometimes he shows a cool-headed side.

The leader of the Vulpes union. She is the closest in age to the other Keyblade wielders, so she approaches them as a friend at times, too.

The leader of the Anguis union. She is a noble person, and she believes their Master holds all of the truths.

The leader of the Unicornis union. He is the reliable, steady type, and he is sometimes told that he's too serious.