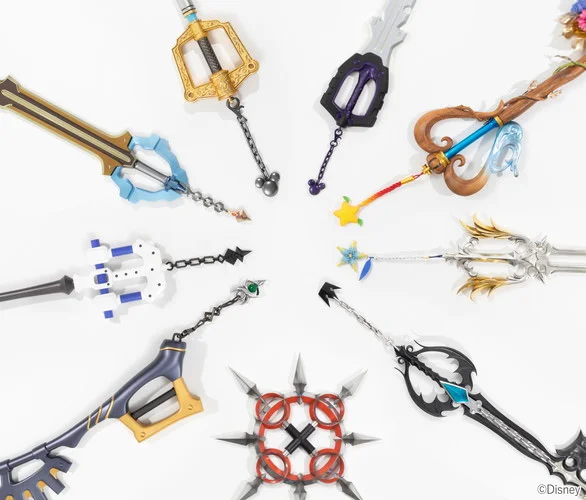 Super Groupies has announced that as part of the Kingdom Hearts series' 20th Anniversary celebrations, they will be hosting a Pop-Up Store from July 29th through August 2nd, 2022, on the third floor of Seibu Ikebukuro. Participants can look forward to 45 items depicting Sora and his close allies.

Additionally, if an individual purchases a special, currently unspecified item at this venue, they will receive a large-sized Sora, Roxas, and Ventus postcard. However, there will also be two versions of this product available.

One is drawn by Tetsuya Nomura and will be offered by all vendors in the venue, while the second is a "live-action" version (likely just implying real people cosplaying Sora, Roxas, and Ventus) that will be exclusively offered by the online Sogo & Seibu storefront for a limited-time. Unfortunately, no images of these postcards have been shared yet.

Moreover, the image of Kairi's Melody of Memory throne shown via our gallery above will be a spot for fans to be photographed.

Lastly, prominent Kingdom Hearts community member Audrey of Aitaikimochi has announced that she has been invited to the Pop-Up-Store press release event and will provide coverage of the products displayed there.

We'll be sure to keep you all updated regarding this event's artistic reveals and product arrivals as it occurs next week.

If you're interested in the Super Groupies lineup of new Kingdom Hearts merchandise, check out our dedicated coverage elucidating pricing, shipment times, and countless product images. Additionally, Aitai Kuji has each new Super Groupies collab item available for pre-order via their digital storefront.

Moreover, Super Groupies posed a behind-the-scenes featurette for those especially intrigued about the photo-shooting process.

Lastly, the gallery below (also pasted above) contains each of these newly added images: