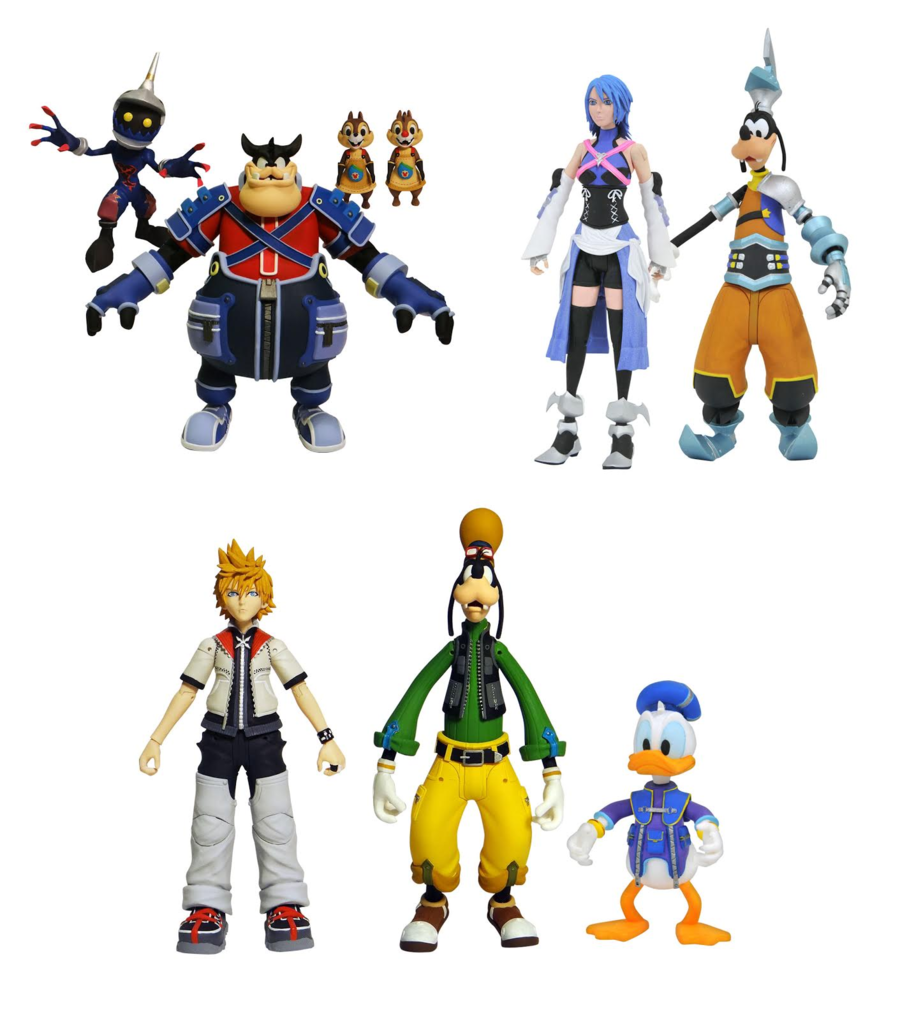 With Series 1 three-packs hitting the comic book and specialty stores today, and more character variations and packaging coming to other retailers in coming weeks, Diamond Select Toys have revealed that they will be rolling out a second series of Kingdom Hearts figures for 2018.

Coming to comic shops and specialty stores in Spring of 2018, Series 2 of Kingdom Hearts Select figures will feature:

– Roxas with Oathkeeper keyblade, Donald with Mage’s Staff, and Goofy with Shield

– Aqua with Rainfell Keyblade, and Goofy from Birth By Sleep

UPDATE [Dec. 18, 2017]: Diamond Select Toys has provided us with a new picture and information, that retailers will have tomorrow, of the Series 2 of their Kingdom Hearts Select line of figures. As shown above, Series 2 of Kingdom Hearts Select will include three packs of figures: Roxas with Donald and Goofy, Aqua with Kingdom Hearts Birth by Sleep Goofy (Goofy in his royal knight armor), and Pete with Chip & Dale and a Soldier Heartless. Each pack will cost $24.99 USD. These figures will also be available in figure two-packs at other retailers.

You can check out the Kingdom Hearts Select Series 2 sales information below:

A Diamond Select Toys Release! It's time to return to the Kingdom! The second series of Kingdom Hearts Select Action Figures brings fans new, beloved Disney characters as well as characters created for the Kingdom Hearts series of games! Three sets of figures arrive in Series 2, including Roxas with Donald Duck and Goofy, Pete with Chip and Dale and a Soldier, and Aqua with Goofy in his Birth By Sleep Outfit! Action figures range from 2 to 7 inches tall and feature multiple points of articulation. Each set comes packaged in the display-ready Select action figure packaging with side-panel artwork. Sculpted by Oluf W. Hartvigsen!

We were also provided with new pictures and information about the new Kingdom Hearts Vinimates Series 2 figures by Diamond Select Toys. You can find out more about those figures in the article here.