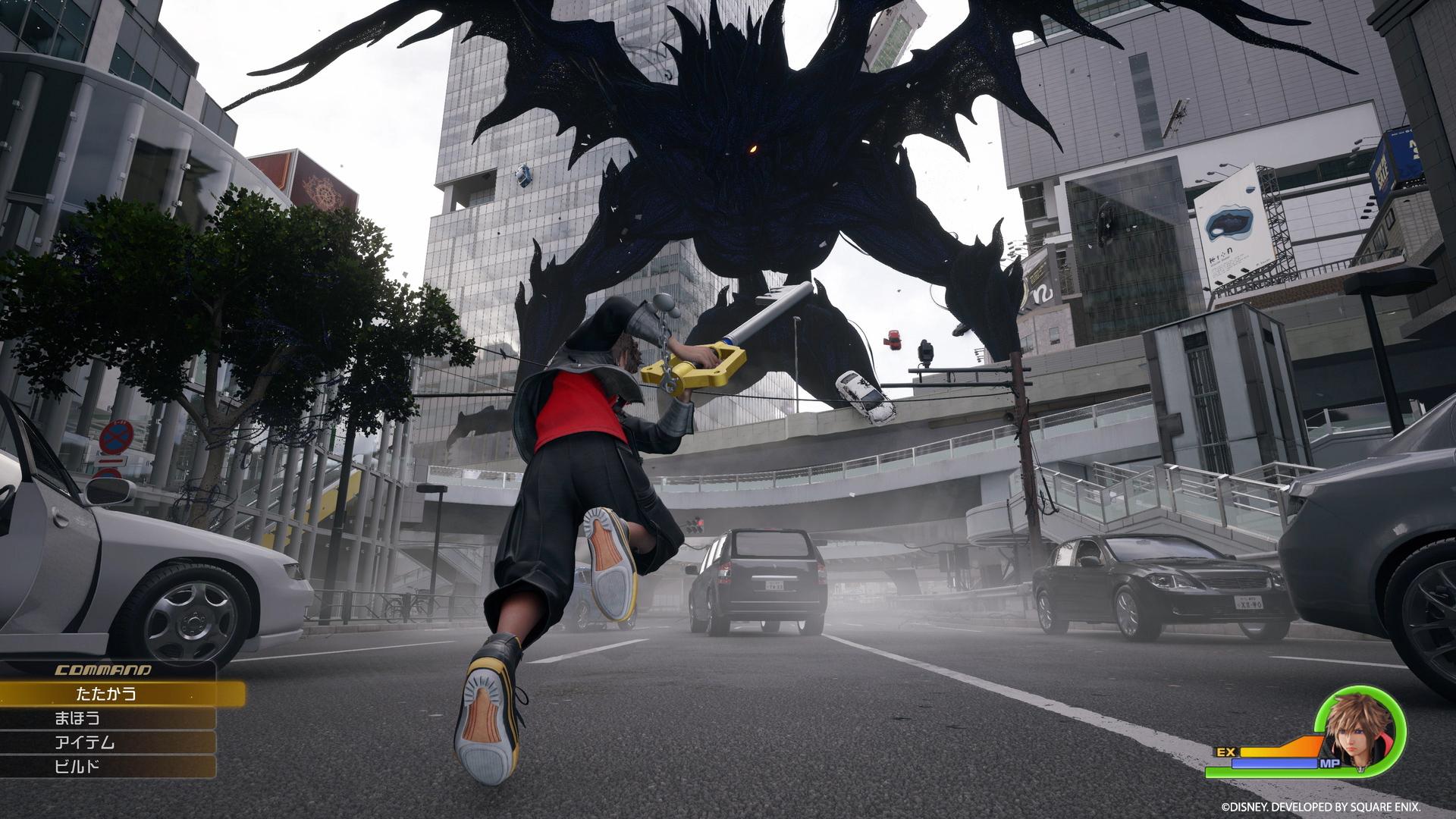 A summation of the provided information has been translated by our team's Ryuji, viewable below:

Chain of Memories: Sora, his companions, and Riku go to Castle Oblivion

Coded: Adventure in the Data World

Melody of Memory: Searching for Clues About Sora

IV: To be Continued

Interviewer: First of all, congratulations on the 20th year anniversary.

Nomura: Thank you very much.

Interviewer: How does it feel to have been with these series for 20 years?

Nomura: It’s still a hard fact to grasp, to tell you the truth. I have nothing but lots of gratitude to everyone who’ve supported the series.

Interviewer: And it has been three whole years since KH3, huh?

Nomura: Indeed, and inside those three years, we released tons of big things such as Melody of Memory, the PC ports and even the Nintendo Switch cloud ports.

Interviewer: According to our staff who was at the event, they said they could feel the passion of the fanbase inside the event.

Nomura: Yes. I’m so glad that the series has inspired both young and old people alike, given that this was a collaboration project with Disney.

[The Interviewer and Nomura then discuss his secret message. This is where we get that comment from Nomura previously where he said that “none of the staff” have figured it out.]

Interviewer: We have heard that KH3 is being developed using Unreal Engine 5, and that the trailer was in Unreal Engine 4. Even though that was an older version, it still looks stunning.

Nomura: Yes, we are carrying on with development using Unreal Engine 5. By the next time* you see Kingdom Hearts 4, it will most likely be already completely into the new engine.

*: “By the next time” = not in the near future, in this case. Famitsu hammers the point that we won’t see anything past E3’s period, which we’ve known previously.

Interviewer: Why did you want to hold the Kingdom Hearts 20th Anniversary Event at Shibuya Hikarie?

Nomura: Shibuya is such a worldwide landmark, and I felt that it would be an easy choice for the event.

Interviewer: Regarding Shibuya, we know that characters from The World Ends With You appear in KH DDD, so is there any connection to that?

Nomura: No. I’ve noticed that some fans have speculated that the Shibuya in The World Ends With You or that the world that Jack's friends come from in Stranger of Paradise have some connection to Quadratum, but I’m that one person that can tell you that “no, there is no connection to those at all”.

Interviewer: Is the room where Sora wakes up also in Shibuya?

Nomura: That is Minami-Aoyama in terms of location. However, the original location is different from the view from the balcony, so we will have the Osaka staff go there for location scouting later to make adjustments for the later revisions of the game.

Interviewer: So it is set up to that extent?

Nomura: Yes, that's right. We have also specified the layout of the rooms, but the furniture, etc., has not been specified yet, so the interior will be changed. That room will be your base of operations in the early stages of the game.

Interviewer: What kind of world is Quadratum? In "KH Melody of Memory," it was described as the "other side of reality known as unreality, a fictional world." Does that mean it does not belong to the world of light, the world of darkness, or the world in between?

Nomura: That is correct.

Interviewer: In "KH Melody of Memory," someone who knew Quadratum appeared. Will she appear in "KHIV"?

Nomura: That is still a secret, I’m afraid. As I said at the event, there was a time when I was not sure whether I would choose to name this title “KINGDOM HEARTS IV” or "VERUM REX". But she is originally a character from VERUM REX, I’ll say that much.

Interviewer: I see, I see!

Nomura: To be frank with you, I was worried that Yozora wouldn't be well received, given that [Japanese fans] didn't sound very welcoming to his appearance in Kingdom Hearts III, but I'm glad they've proved me wrong. The hype for Verum Rex is certainly high. (bitter laugh)

[Next, they talk about the narrator in the trailers, and tie back on how it was a “character we’ve known” and how the voice actor did two tones, and such.]

Interviewer: I noticed the logo got changed, huh?

Nomura: To signal that we have started a new saga, we decided to change the logo. The font and logo design do look simplistic compared to the previous, but although it is simple, I made sure that it would still capture the essence of Kingdom Hearts.

Interviewer: Donald and Goofy are seen at the end of the trailer. How will the story develop if we know that Sora is in the real world (Quadratum)?

Nomura: As you could tell, they are currently looking for clues regarding Sora’s whereabouts. Sora looks more realistic because he is in Quadratum, and since Donald and Goofy aren’t, they’ve retained their cartoony style.

Interviewer: What’s the identity of the two black coats we see on the KH4 trailer?

Nomura: Sorry, but that’s still a secret. (laughs). However, what I can tell you is that alongside me, Akiko Ishibashi and Oka Masaru will be helping write the scenario for Kingdom Hearts IV.

Interviewer: In the trailer, we can see that Brain appears. Will he be the main character?

Nomura:  No, he won’t. The main character will be yourself. Much like Union Cross, the protagonist will be a custom player avatar created by yourself.

Interviewer: Missing - Link seems to be centered on action-packed battles that can also be enjoyed in multiplayer, with the addition of so-called location-based game elements that utilize augmented reality technology. You say that you can move around without actually going out, but in that case, do you perhaps mean that you can move around while moving your character in the game?

Interviewer: So you can even walk around Okinawa, if you wanted to!

Nomura:  Yes, but if you want to go far, far away, it will take a certain amount of time (laughs), but you can also use points to teleport right to where you want to go.

Interviewer: So if you do not want to walk, you can spend points and teleport wherever you’d like, or you can simply choose not to and walk around yourself. It’s all up to who plays it.

Interviewer: If the game is linked to the real world, does that mean that there will be no Disney worlds?

Nomura: We are experimenting with a variety of things, but depending on the timing, the terrain and atmosphere will be partially based on the Disney worlds motifs. In the early stages of development, we covered the entire map with a texture change, but it seemed like overkill, so we are trying to make it more consistent.

Nomura:  We are trying to develop some new things that wouldn’t be normally possible in the main series of games. I hope you look forward to testing those out on the Closed Beta, as it is scheduled for Fall of this year.

Interviewer: You have mentioned that for the Dark Road finale, you have added more scenarios than you originally planned. Could you elaborate more on that?

Nomura: Originally, I wanted to focus more on Xehanort’s classmates and seniors, but due to some last-minute changes in the plan, we couldn’t focus on them as much, since I was told to prioritize Xehanort’s character development. However, I felt really unsatisfied that I had to cut that, so I decided to have the finale give them the required focus. You will also understand the reason as to why Xehanort became the way he is [talking about his old self being completely bald].

Interviewer: Ohhh! I look forward to that! (laughs). Last question: Do you have any further plans for this year’s 20th anniversary?

Nomura: The two Flash animators for the now-disbanded Dark Road team are hard at work in making sure the finale ends things on a high note. We also have the Missing Link closed beta coming this fall. While I can’t disclose any other plans than that, I urge you to keep an eye out on the official social media accounts, just in case.