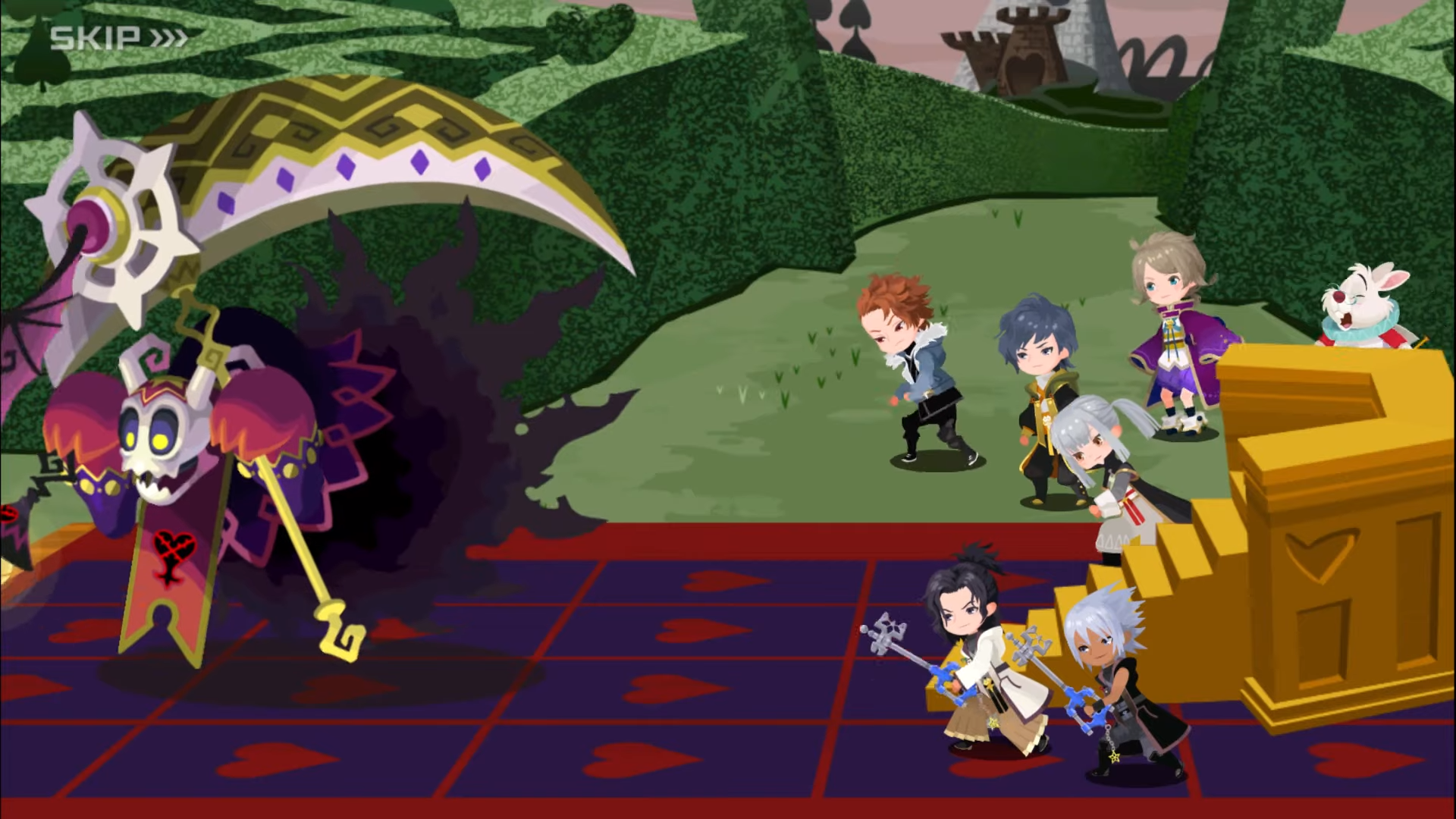 The second story update for Kingdom Hearts Dark Road has launched in Japan with a total of three story scenes! Unfortunately, the global version of this update has been delayed to early August with no specified reason and date of release given.

You can view the Japanese cutscenes below, courtesy of KH_Damo who also provided videos of the first Episode's cutscenes. Due to the nature of the final scene, it will be spoiler tagged so viewer discretion is advised.

What are your thoughts on these developments and when exactly do you think the next global update for Kingdom Hearts Dark Road will launch? Let us know in the comments below!

UPDATE: Our team's Ryuji has translated the three new cutscenes added in Episode 2 of Kingdom Hearts Dark Road! You can view the provided translations below.

Inside the same classroom, at the same time...

Spending the same day-to-day life as them.

It was almost like...I was having a good time.

However, I soon realized that the "me" in that classroom was no different than the "me" on that small island.

The repeating days in a cramped world.

It's just the box that's changed. Nothing more.*

By rejecting that world...I came here.

The issue here is definitely not the box.

The issue...is how they are conscious of the outside world.

By connecting my heart to theirs' on this day-to-day life,

I was slowly finding an answer to my question.

But...midway through that...for some unknown reason, my heart began to change.

EPISODE 2: THE PRESENCE OF DARKNESS

Urd: Says the guy who's late to class every time.

Eraqus: HEY! I may be late, but at least I have more knowledge in that area!

Urd: Are you that confident in skipping class?

Eraqus: What are you talking a--

Xehanort: Who are you? Actually, what ARE you?

Cheshire Cat: If you're waiting for some friends, I'm afraid they aren't coming anymore, nya.

Xehanort: How do YOU know that we're waiting for them?

Cheshire Cat: How? Why, the Cheshire Cat oversees everything and anything.

Eraqus: If you're so sure about it, then what happened to them?

Cheshire Cat: Your friends have been taken as prisoners.

Xehanort: Prisoners? To where?

Cheshire Cat: Who knows, who knows.  Maybe to a place in the shadows...

Urd: What shall we do?

Xehanort: Well, for starters, we need a clue. Else we'll just walk around aimlessly.

Eraqus: We need to find anything that could lead us to them. Who knows what happened to the---AAAAAHHHH!

Cheshire Cat: Oh yeah, you wanted a hint? The answer should be plainly obvious soon enough.

Eraqus: Geez...he needs to stop appearing like that...I almost had a heart attack!

Urd: "The answer should be plainly obvious soon enough." Wonder what he meant by that.

Spades 1 Trump Card: You are arrested for trespassing on the Queen's grounds!

Eraqus: N-N-No. We're just waiting for a couple of our frie--

Eraqus: Oh geez, they're not even listening, haha...

Hearts 1 Card: The trial is about to start, what are you doing?!

Spades 3 Card: We were just trying to deal with these intruders--

Hearts 1 Card: That can wait. If you are late, the Queen will have your heads today.

Eraqus: And there they go...

Xehanort: For now, I'd say so. But they said "the trial is about to start"...

Urd: What do you mean?

Xehanort: A trial is where people are judged right? So if it's starting, the people being judged are...

Eraqus: *dawns on him* AHHHH! That means THEY'RE over at this trial thing! That's what that weird cat meant!

Urd: I wonder what the reason for their judgment is.

Xehanort: No idea. But if trials exist, then this world must have an "order".

Urd: Well, we know what we have to do.

Eraqus: Yes yes! We need to go to where Bragi is! To the trial grounds!

* This is NOT a reference to the Master of Masters' box. It's just that he means that he continues to be the same Xehanort, just in a different scenario.

White Rabbit: C-Court is now in session. The defendants are accused of "unauthorized entry into the Queen's territory"...as well as "theft of the Queen's possessions".

Braig: Wait! We're innocent! We didn't steal anything! We just defeated the monsters!

Queen of Hearts: Ha ha ha. There's no wriggling out of your long list of sins.

Braig: Sins...? Are you telling me that defeating monsters is a sin?!

Queen of Hearts: Everything, and I mean, EVERYTHING, belongs to me, Queen of Hearts. And that means I can do whatever I see fit to them.

Braig: Wait..."everything"? You mean the plants, people, and even the monsters belong to YOU?

Eraqus: I've HAD it with that old hag. *takes out Keyblade*

Xehanort: Wait. What are you gonna use the Keyblade for?

Eraqus: Isn't it obvious? To save them!

Xehanort: Whoa whoa there, Mister. You're going to interfere with the residents of this world? Need I remind you of the "Order"?

Urd: So what shall we do?

Xehanort: Simple. We just do what people usually do in a trial--defend the defendant!

Xehanort: W-What? Why are you grinning? LET'S GO!

Queen of Hearts: I will now give my ruling. The defendants are GUILTY!

Xehanort: I object as well. What is the basis of your ruling?

Eraqus: Yeah! Do you have any reason to kill them when they have done nothing wrong? Do you call this a fair ruling?

Queen of Hearts:  Who are you nuisances?! No one was supposed to enter. NO ONE! My ruling is ABSOLUTE. ABSOLUTE!!!

Xehanort: So your reasoning is because your ruling is absolute...that's not a fair ruling. For starters, why do you say you own EVERYTHING in this world?

Queen of Hearts: Ho ho ho. Well, I'll answer that at least. I'm the queen of this world! Which means you're all under
my ruling and my rules!

Xehanort: "Under my ruling and my rules"? What utter nonsense.

*Camera pans over to the entrance. The Trump Cards laugh.*

Queen of Hearts: See? They don't think it's utter nonsense. With that said... OFF WITH THEIR HEADS!

*The Trump Cards assemble together in a pile.*

Eraqus: What shall we do?

Xehanort: I don't think we can talk our way out of this anymore.

Eraqus: So we're going to arms, huh? I like that.

*Xehanort looks over to the Queen of Hearts, and sees a mysterious shadow behind her...*

Queen of Hearts: OFF WITH THEIR HEADS!!

*Suddenly, the Ferry Reaper appears and knocks down the card tower.*

*Everyone takes out their Starlight keyblades*

White Rabbit: And with that, c-court is adjourned! All rise and RUNNNNNNNNNN!!

Queen of Hearts: What are you doing?! Hurry up and bring me their heads!!

*The Ferry Reaper blows away the three of them*

Xehanort: He's a tough enemy but, you ready?

*After defeating the Ferry Reaper...*

Eraqus: Phew. We managed to get out safely.

Braig: Dude, I never thought I would fight a Heartless of that size!

Hermod: Me neither. I'm shocked we managed to beat it.

Eraqus: Ehh, it wasn't so tough. Sure, it might have been tough if we were alone, but together, we're unstoppable!

Hermod: Now I wonder...was that really a Heartless?

Braig: Eh? What do you mean? Our enemies are the Heartless aren't they?

Urd: I see what you mean. We wouldn't have left that trial without a fight...

Eraqus: Ugghhh. Why do we gotta remember the Master's teachings at a time like this?

Hermod: When peoples' hearts are taken by the darkness, it materializes into Heartless. The anger the Queen felt towards us probably materialized into that. But what we did was against this world's "Order". We shouldn't have chosen to interfere with the residents.

Urd: Eraqus, that's Order 101. Did you really forget that?

Eraqus: Sigh. I was worried about you guys, you know.

Vor: Well, that can't be helped.

Eraqus: Come to think of it, could the darkness have claimed our upperclassmen? I mean, think. When people go into the darkness, it's almost a "path of no return", right? Even with the "Order"...

Braig: What do you think, Xehanort? Hey, Xehanort!

Eraqus: We were thinking if there was a possibility that our classmates were claimed by the darkness.

Brain: Darkness can take many shapes and forms...even inside people.

Eraqus & Xehanort: Darkness can take many shapes and forms...even inside people.

Eraqus: I could ask the same to you.

Hermod: Even inside people. Hmm...

Xehanort: If this keeps up, I suspect the Queen of Hearts won't be our only enemy. There will come a time where we must wield our keyblades to fight something other than the Heartless.

Eraqus: I believe in the light inside peoples' hearts.

Urd: Well, shall we resume our investigation?

Vor: Yeah. Our objective is to find our upperclassmen, right?

Braig: You really are adamant on this, huh?

Hermod: Braig...watch what you say...

Eraqus: Why the long face?

Eraqus: Yeah! Do you have any reason to kill them when they have done nothing wrong? Do you call this a fair ruling?

Queen of Hearts: IT IS FAIR! BECAUSE I SAID SO!

Eraqus: Wait, you're saying you saw a figure of darkness behind the Queen of Hearts when that monster appeared?

Xehanort: Yeah. Could it be...unconscious darkness inside people?

Xehanort: All we can do now is keep searching.

Vor: Hmm? What are you guys whispering to each other?

Eraqus: We were thinking of investigating this world further. Right, Xehanort?

Hermod: If we find new clues that will lead us back to this world, we will return here should it be necessary.

Braig: But won't we get caught if we come here again?

Urd: I judge the best course of action will be separating ourselves for now.

Eraqus: Leave it to me and Xehanort to keep investigating!

Xehanort: Yeah. That was the intention.

Eraqus: *whispers* What shall we do, Xehanort?

Eraqus: Too bad. You lost.

Xehanort: All right. If we find anything, let's meet together once more.

White Rabbit: C-Court is now in session. The defendant is accused of "unauthorized entry into the Queen's territory"...as well as "theft of the Queen's possessions".

Queen of Hearts: You again? What business do you have here? I'm SICK of your face!

Xehanort: Really now? You're sick of seeing my face?

*Suddenly, a shadow emerges from behind the Queen.*

Xehanort: I knew it. I can see the darkness...

NEXT TIME: EPISODE 3: The Purpose of the Journey.