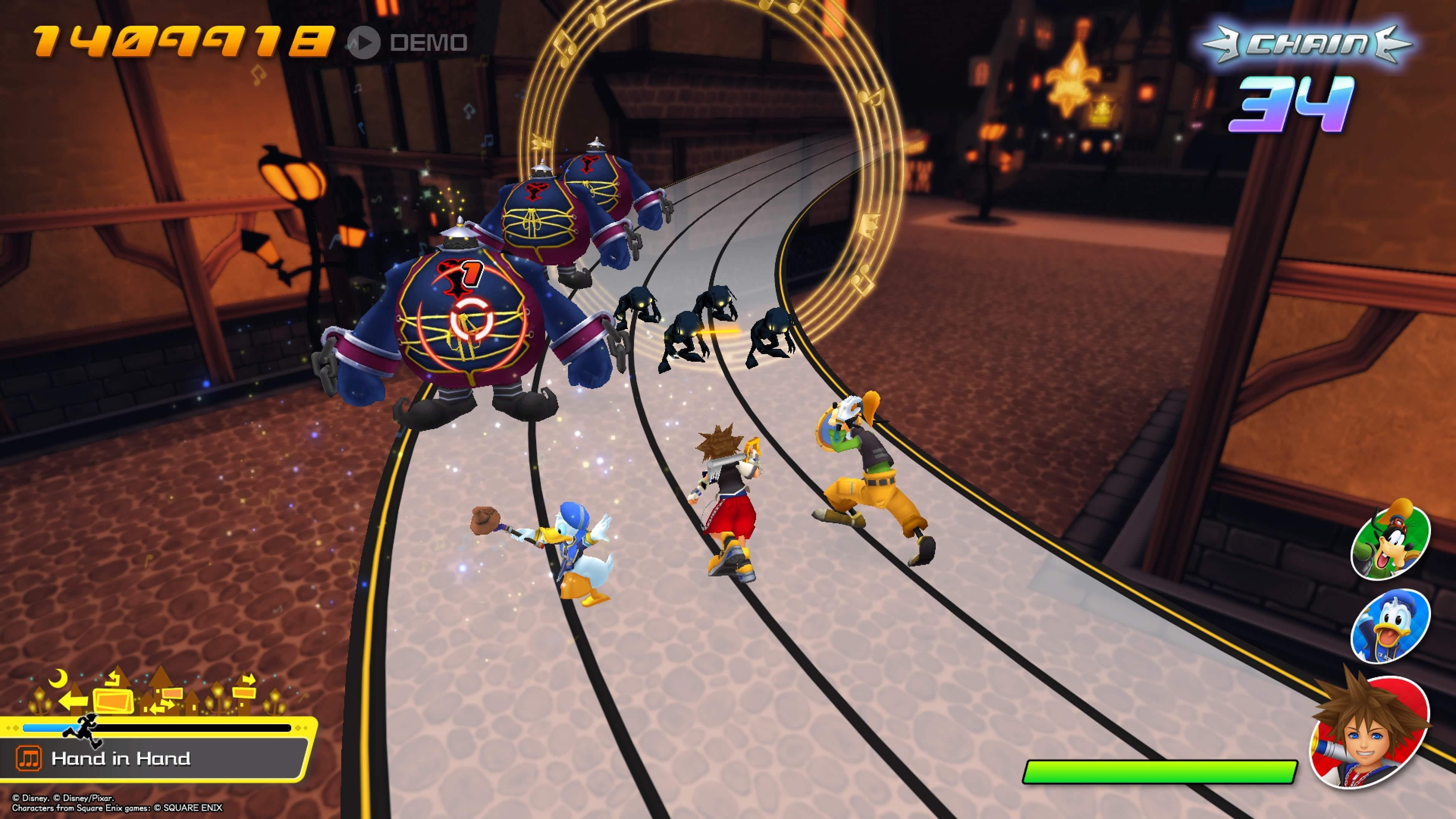 Masanobu Suzui, the co-director of Kingdom Hearts Melody of Memory, sat down with Square Enix and decided to "dig a little deeper" into one of the tracks that he worked on-- the song "Hand In Hand", a reoccurring battle soundtrack for the game series.

The first step in the process was choosing the track to begin with!

"Songs were chosen for a variety of reasons - perhaps their beats and tempo make them a natural fit for a rhythm game, maybe they’re popular with fans, accompanied memorable moments, or even simply elicited an emotional reaction from those of us working on the game.

“Hand in Hand” from the original KINGDOM HEARTS fulfils all those criteria, making it an obvious choice for inclusion. In fact, it was one of the first tracks we worked on - and the first to be completed."

The second step that Suzui talks about is cutting the song down-- some tracks of the game are quite long, and they had to figure out what part of the song they wanted to use for the gameplay.

"...We identified the section of the track that would be the easiest to play as a rhythm game, and also included the key phrases of the song. From there, we made a cut - essentially we brought out the specific part we wanted to use in the game."

Suzui then explains how a document is then made, which concerns how they want the stage to look while it's being played. This includes what they want to show from Traverse Town, such as Cid's shop, the hotel, the item shop, and the Lady and the Tramp fountain. Afterwards, the enemies are chosen.

"We had several goals when it came to the Heartless, Unversed and Nobodies that Sora and his allies would face on Field Battle stages. Firstly, Melody of Memory is intended to be a celebration of the KINGDOM HEARTS series, so we wanted to bring out the individuality and character of each enemy from the original games.

It was also important to make sure that the actions by Sora and other party characters when attacking enemies would have enough variation not to become overly repetitive.

In addition, we wanted to make it easy for the player to be able to read the enemy movements and aimed for a structure with several predictable movement patterns, rather than a different pattern for every single enemy.

We listed all the enemies from the original KINGDOM HEARTS games and put them into broad categories, based on criteria like whether they walk or fly, if they’re sedate or active, and whether they had a lot of HP and were difficult to defeat.

We knew that the enemy types would differ for each world so when we were designing “Hand in Hand”, we had to ensure that all movement types were accounted for when making the final selection of enemies to include."

When everything has been picked and chosen, a single team member is asked to create the note sequence. Suzui explains that the team member had to listen to "Hand In Hand" a numerous amount of times to create what Suzui calls an "overarching concept for the stage - normal at the beginning, followed by some difficulty spikes around the middle and end of the track.".

"They then created separate note sequences for the three difficulty levels with a specialised tool that displays provisional models.

The most important points to consider when creating the note sequence were not only whether it was fun to play, but also whether or not the enemy selection correctly reflected the KINGDOM HEARTS universe, and whether the input from the player matched the emotional climaxes of the track.

It was very valuable for us to have big KINGDOM HEARTS fans among the development staff who would pore over these points from their perspective."

After that, Suzui explains that it's then time to revise and edits to the soundtrack and the stage itself.

"Once any track was completed to a certain level, the person working on it filled out a sheet that was circulated internally and gathered the team’s feedback. This included opinions on overall direction, such as how the track, the world, and enemy choice linked together and whether it felt true to KINGDOM HEARTS.

People also wrote specific requests: for example, this particular note sequence at this particular time should be changed, this particular moment needs a different action - things like that. After using this feedback to make further adjustments, the track reached its first completed form.

As I mentioned, “Hand in Hand” was actually the first track we completed with this process. At this early stage in development, we weren’t using the most up-to-date sound effects, nor were the motions for Sora and the other characters fully adjusted. But we could still see for ourselves how fun it was to play along with the song.

It was exhilarating to picture the final game and we could imagine lots of people enjoying it, once it had been polished! This helped us more confident that the game - and the track - was progressing properly."

It doesn't stop there by just revising and then sending the stage off to production. They must test the stage over and over again to make sure that it's perfect for playability.

"Towards the end of the development of the game, once the note sequences for tracks had been determined to a sufficient standard, we played them all across all the difficulty levels. Naturally, that included “Hand in Hand.”

These tests let us make repeated improvements and additions, such as evening out any discrepancies in quality due to the early stage in development that the track was made, and adjusting it to be in line with the most recent guidelines for note sequences. We also improved visibility and refined enemy movements - this had a big impact on the difficulty level and how noticeable the prompts were.

Finally, a few leaders looked over everything again to ensure consistency, and the development version was fully complete. There may have been a few adjustments later due to feedback from Quality Assurance (QA) and external testers, but the bulk of the work was complete."

Suzui concludes the blog by saying:

"I hope you found that interesting. As you can see, even a single track in KINGDOM HEARTS Melody of Memory was a big undertaking. Each one is hand-crafted to provide an enjoyable rhythm-action experience, and it’s gratifying to see so many players enjoying it now that it’s released."

You can check out the full article on the Square Enix Blog.

What are your thoughts on these details? Did you find anything fascinating or surprising? Let us know in the comments below!