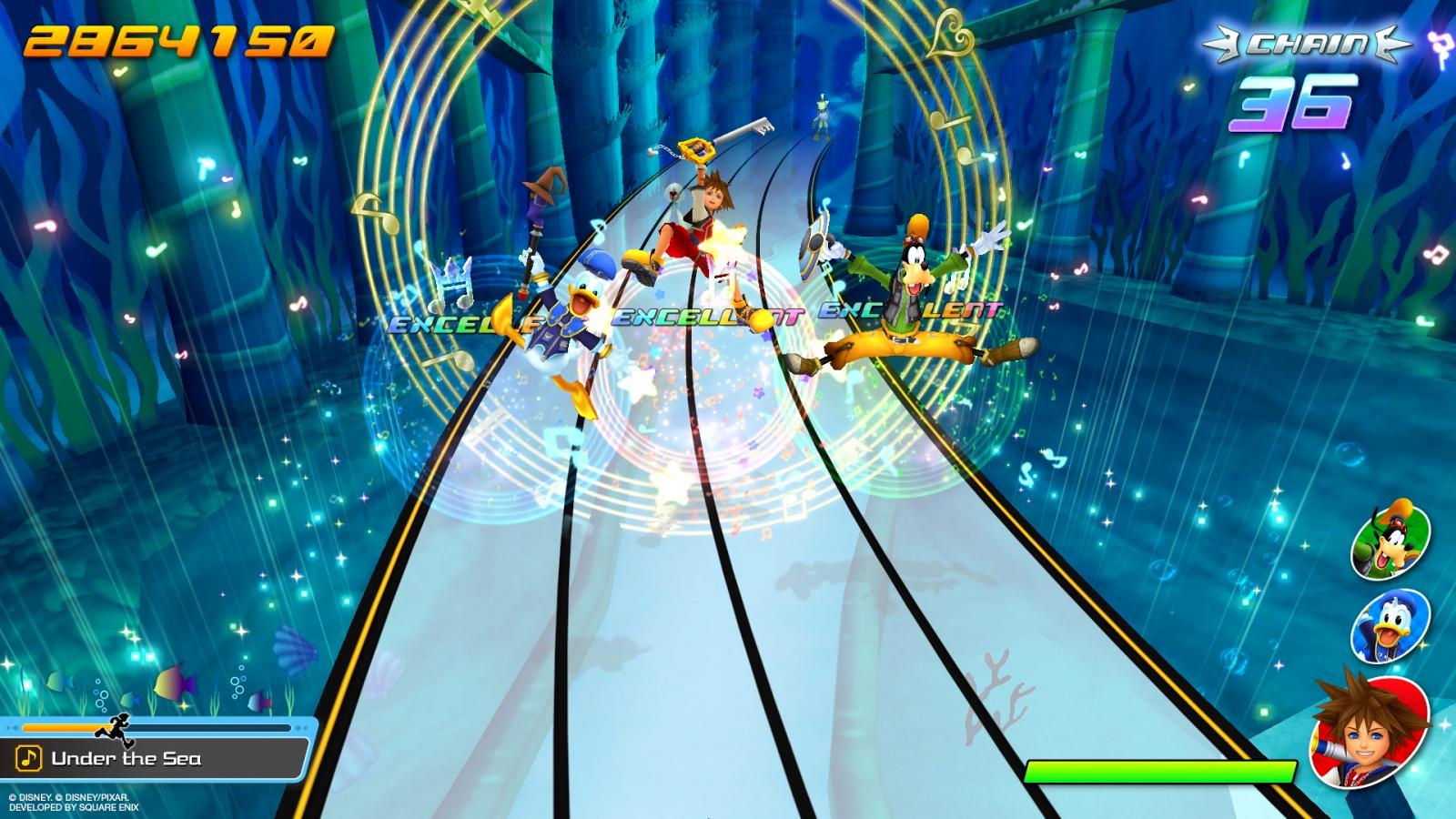 Suzui described track selection as being a particularly tricky challenge due to the massive amount of tracks within the Kingdom Hearts Series, the technical and emotional considerations, and the tempo and beats of certain tracks as well.

Right at the start of development, we made a list of all the different music across all the various games. Then, we collected all kinds of information that we could use to identify the songs that had left a particularly strong impression on players.

For example, we looked at which tracks had been included on the set list of the recent KINGDOM HEARTS Orchestra -World of Tres- tour, and which were voted most popular by fans. We collected all kinds of data, and by studying it, we were able to work out many of the songs we knew would really excite people.

The element of the game that really brought the selection into focus though was the World Tour. The core theme of that mode is for players to relive the KINGDOM HEARTS series (so far) through music, so we made sure to include as many tracks from important and memorable scenes as we could.

These considerations allowed us to whittle the options down to a shorter list, but when it came to the final selection, other factors came into play - some technical and some emotional.

After defining the tracklist, Suzui discussed the process behind ensuring the gameplay elements felt fun, engaging, and true to the Kingdom Hearts series, with the goal of recreating the same memories and feelings from previous entries.

One early prototype had notes flowing towards player on a score - a kind of presentation often used in rhythm games. In the background, a 3D model of Sora and the enemies would appear and move according to how well the player input the various prompts.

But while it was entertaining, it didn’t feel true to the series. The KINGDOM HEARTS games see the player running through different worlds on their adventure, seamlessly transitioning into battles with various enemies - as KINGDOM HEARTS Melody of Memory is about recreating that experience in a kind of ‘digested’ version, we wanted to capture the same feeling and revive memories of those games.

After further experiments, we arrived at the concept of having Sora and the other characters run along a music stave above the different worlds, fighting as they go. This felt very ‘KINGDOM HEARTS’ and just as importantly, it was fun!

On building out stages, Suzui commented that the team had to test the game multiple times to ensure that all elements, and information presented on screen including the camera positioning, enemy positioning, and background models were just right.

We were very careful not to set an overly complicated or intricate route, as that could distract the player and make it difficult for them to concentrate on the inputs. For that same reason, we ensured that we aligned the camera to even the slightest shifts in any direction.

Suzui also commented on presenting the visuals of the game in a way that was not overwhelming to the player, including choosing how far in advance enemies should appear, visual cues for letting the player know when to hit the right beat, and keeping to the visual style of the Kingdom Hearts series.

When it came to visuals, we carefully considered aspects like the colour contrast between enemies and the background - the information had to stand out so the player could process it easily.

We spent a long time digging into the visual details of the game, because they really matter! Every single element of a stage could have an impact on its readability, and we worked hard to make sure that they all worked together in tandem.

Suzui describes timing as being an element that could make or break the game. With each stage being custom built, the timing for each stage would vary depending on the track.

Every stage in the game was custom built. We made incredibly precise adjustments to enemy locations, and the overall balance, based on the movements of the course and its exact curvature.

For example, the timing for jumps is set to the beat of the track, so leaping into the air at the right time should make players feel like it’s part of the rhythm. Even small details like the time spent in the air following a jump is set to the stage’s specific timing, so it varies between tracks.

On the game's various difficulty levels Suzui shared that Proud Mode was the difficulty that underwent the most iterations to ensure the note sequences, and enemy placements were challenging but still straightforward to the player and synchornized with the particular track.

Lastly Suzui closed off by saying:

As you can tell, making a rhythm-action game is a complicated task. There are so many elements to consider, from the visuals to the timing, and everything has to be tested and refined over and over to make it as enjoyable as possible to play.

I’m very satisfied with stages in KINGDOM HEARTS Melody of Memory. I think they succeed in providing a satisfying gameplay experience, as well as evoking memories of the wonderful games that inspired them.

You can read the full article on the Square Enix Blog.

What are your thoughts on these details behind the making of Kingdom Hearts Melody of Memory? Let us know in the comments below!