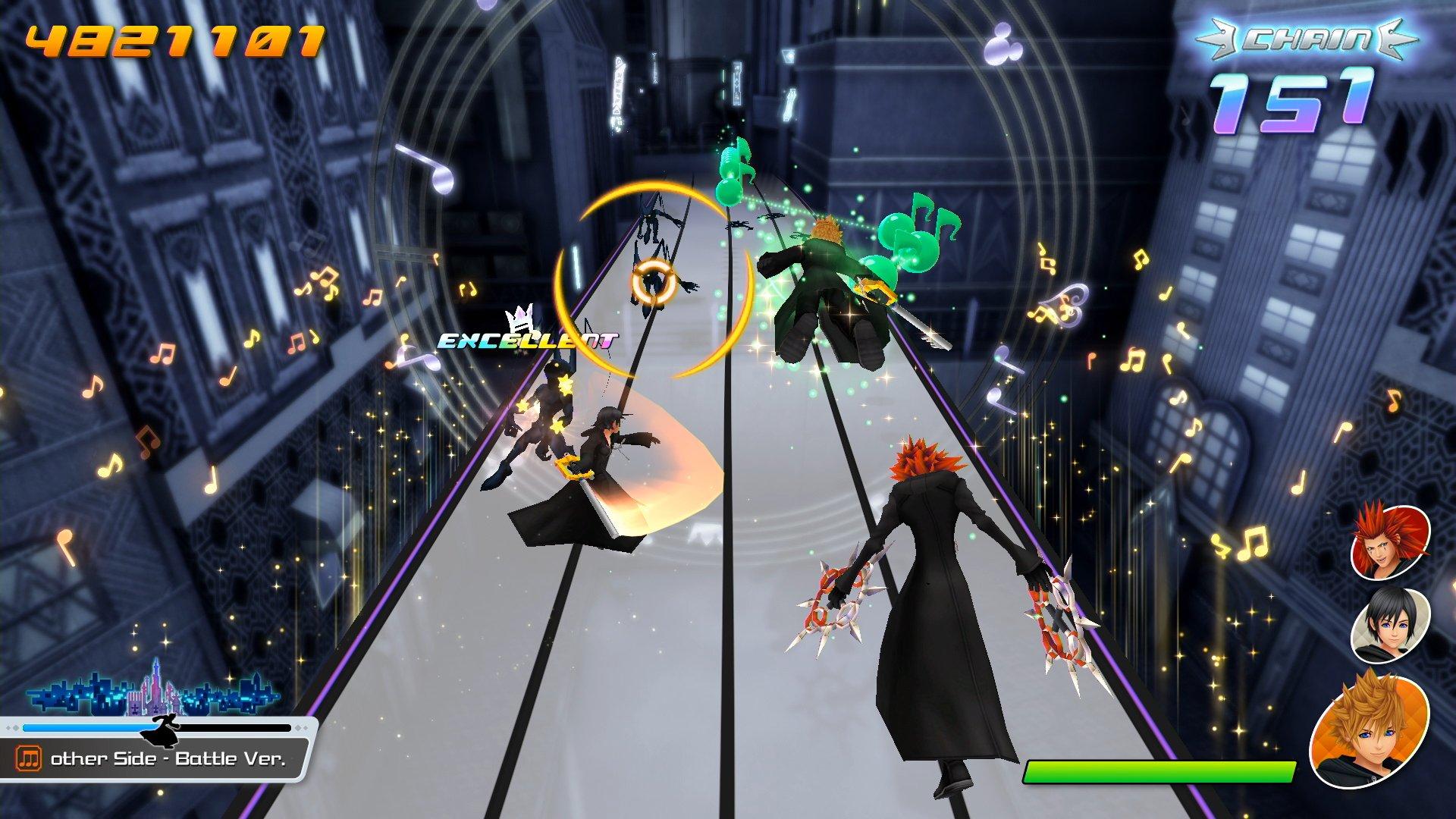 You can the interview in full, below.

DualShockers: Can you tell us what sparked the first idea or inspiration that went into making KH: MoM? Is it an idea you had for the series for a long time?

Masanobu Suzui: Hazama-san and I were working together to create these rhythm action game series called Theaterythm. That series had been producing titles over the span of eight years, and they had expanded from the Final Fantasy series to Dragon Quest and now we are expanding to the Kingdom Hearts franchise.

Because there are so many songs that have made an impression on players’ hearts, we were very interested in the idea.

At the team, we tried to develop a plan to create a game and presented it to Nomura-san. At the time, we weren’t able to move forward with the project and the idea remained up in the air. Disney took notice of it after a few years and they re-approached Nomura-san, saying, “Would we be interested in making a rhythm action game using the Kingdom Hearts franchise?”

Nomura-san felt perhaps it was an appropriate time to do something like this, so that is how the project came to life.

DS: The Kingdom Hearts games have always had a strong connection to music. Which pieces of music or songs did you personally feel most passionate about including to represent the series in MoM?

MS: In terms of choosing which songs, for any Kingdom Hearts title — any song really got you to the edge of their seats. There are many songs that are very emotionally moving and some parts people would cry over. It has a lot of great songs that taps into the players’ emotions. As a player myself, there are a lot of songs, phrases, and melodies that ring true and are very impressionable. It wasn’t so much a focus on any individual piece… more like it was hard choosing. There is a limit to how many songs we can include in the game, so selecting the songs was the bigger challenge.

DS: It was initially announced that KH: MoM would feature over 140 songs. Will that include any remixes/new interpretations of past KH music? Are there any brand new songs?

MS: When you open up the title screen, you will hear a newly-arranged track for a Kingdom Hearts song. Another thing to look forward to is during the staff roll, you will hear another newly-remixed song. In terms of the actual songs that you will be playing through in the game, those will all be the original tracks. The reason we are doing that is because the point of the game is to walk you through the experiences of the various titles within the franchise and bring back those memories — “Melody of Memory.”

We have so many songs to choose from and work with that we deliberately chose the original versions to incorporate into this game.

DS: Speaking of, would you say Melody of Memory is a good entry point for those who didn’t play the Kingdom Hearts series in the past?

MS: You hit the nail right on the head; it is unmistakably going to be a great introduction into the Kingdom Hearts series. Even as I was creating it I felt that revisiting some of the previous titles really jogged my memory. I even took a look at the remixes as well, and I’ve realized how long it’s been since I’ve played it for the first time.

With all of the music incorporated the game, there are parts where you are taking a look at cutscenes from the previous titles and you have the narration done by Kairi walking you through the memorable scenes. It really will give you an idea of what the story’s narrative is. I felt it was a good condensed, enriched experience that brings emotional weight. I think people playing Kingdom Hearts for the first time will really get a taste of that experience.

We had some developers on the team who are new to the series play the game, and they themselves were very excited about the tracks chosen. It was a great experience for them as well. They felt after playing the music portion of it, they became interested in some of the older titles and wanted to experience it in full. So we are hoping that will be conveyed to the players as well and will allow for people to get interested and learn more deeply about Kingdom Hearts titles.

DS: What was the process like of deciding which Disney Worlds would be included in MoM?

MS: With the gameplay of Melody of Memory, we have this mode called “World Tour” which you are going through the different stages and worlds. We tried to follow along with the story and the narrative of the Kingdom Hearts series. We made sure to go to areas where there was a boss fight in the specific world. We also tried to choose as many Disney worlds as possible, but we had to take into consideration where players were able to go when playing the original games.

We’re hoping that it won’t feel like a rush through a collection of the entire series, but it feels robust.

DS: What were the biggest challenges in trying to implement the mechanics and gameplay of KH into a rhythm game experience?

MS: One of the few things that come to mind, we tried to reconstruct the Kingdom Hearts gameplay experience in a 3D environment. One of the things we focused on was character movements.

Specifically how the characters move and their motion set. In the original titles, Sora swings his Keyblade in a very smooth movement. When you are fitting that for a rhythm game, you want to hit the button and react immediately to hit your enemies. Our challenge was how do you make it look like the movement from a Kingdom Hearts game but still have that kind of mechanic incorporated.

We took a style that is utilized a lot in Japanese animation where you deliberately adjust the keyframes so the animation gets the ‘exact hit.’ That way we have that sort of button mechanic work properly, but Sora will move exactly like in a mainline Kingdom Hearts game. We worked very closely with the Kingdom Hearts team on the console games to get the movement right, and we tried to do that with all the characters.

DS: Will dual English/Japanese audio be a possibility for the release of Melody of Memory?

Ichiro Hazama & MS: It’s already set, so if you buy the Japanese version of the game you will get the Japanese audio. If you get the overseas version, you get the English voice. I’m afraid we won’t have dual-language functions.

DS: Will the online mode include rankings to keep track of the best players?

MS: It’s a bit unusual; we’ve seen Birth by Sleep do an ad-hoc multiplayer in the past, but it is unusual. It takes inspiration from the Theaterythm series. Curtain Call had the online competitive mode. It’s been about six years since the release of Curtain Call and people still love playing with each other. Fans would get together and do tournaments where they would utilize these online features and play against each other. We wanted to incorporate that with Melody of Memory as well.

With this rhythm action game and following the overarching story of the Kingdom Hearts series, that is the main component of this game and we are trying to rekindle that spark of nostalgia. We believe that the fans are going to want to revisit these songs over and over again, and that’s why we thought it would be a good idea to incorporate this online mode to allow for competitive play.

A quick overview of the online mode is you go in with two players and each of you will pick a song that you want to play. One of the songs get picked. So you play through the song together, and as you’re playing you are trying to sabotage the other player so you can get the higher score. You have these little tricks that you will try throwing at your enemies. Whoever gets the higher score will win that round, and will be awarded a card. The game is best 2 out of 3, so whoever wins two cards will win — and their ranking will go up. Players will be trying to rank up throughout.

We’re hoping that being able to play these songs over and over again will allow for good replayability.

DS: Overall, Melody of Memory looks like it has an easygoing atmosphere, compared to the previous game in the series, Kingdom Hearts 3, which was a story climax with a strong, serious atmosphere.

Is Melody of Memory supposed to be some sort of a breather before going back into more serious themes? Or can we expect serious story developments to happen in Melody of Memory?

The overall concept of Melody of Memory is to look back at what’s happened so far, so through the game you will see a mix of serious and lighthearted moments. There’s also another element that will be a big part of the plot — and we don’t want to spoil it — with some newly included scenes that you may have seen in the trailer.

They might not be as robust as a Kingdom Hearts game, but we do have something prepared to give that sort of surprise that is unique to the series. And it will give you a glimpse into what’s going to come next. We hope that players look forward to it. 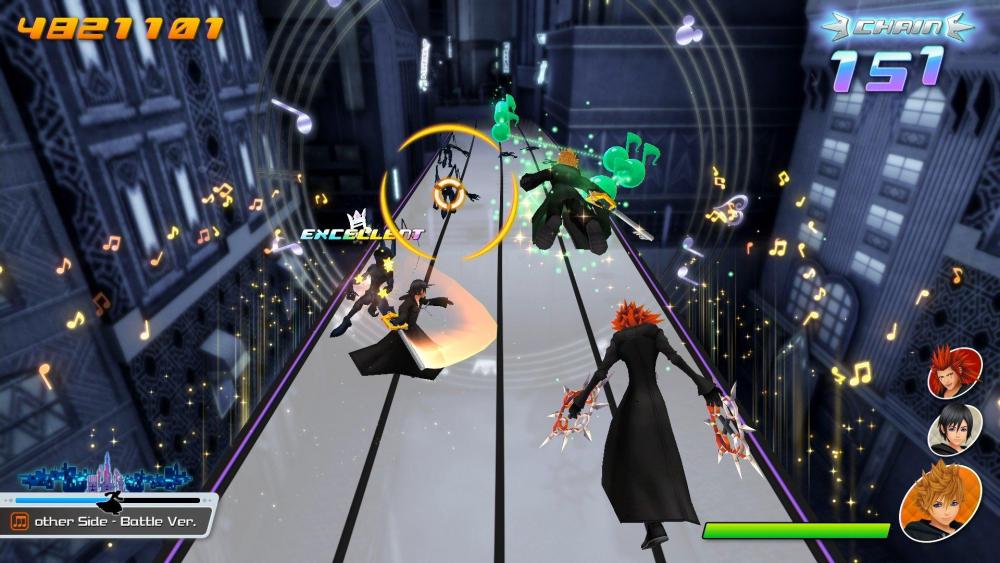 Other notable tidbits of info are that the team hopes this title is replayable for fans to the same extent that other Theatrhythm have been and there will be a mix of serious and light hearted moments throughout the game's story. There will another big element to the plot that the team is avoiding spoiling. Kairi is the narrator for when you view memorable scenes. The team finds this title to be a good introduction to the Kingdom Hearts series, and lastly, they find the 'World Tour' (Story) mode to be robust.

What are your thoughts on this batch of info for Kingdom Hearts Melody of Memory? Let us know in the comments below!