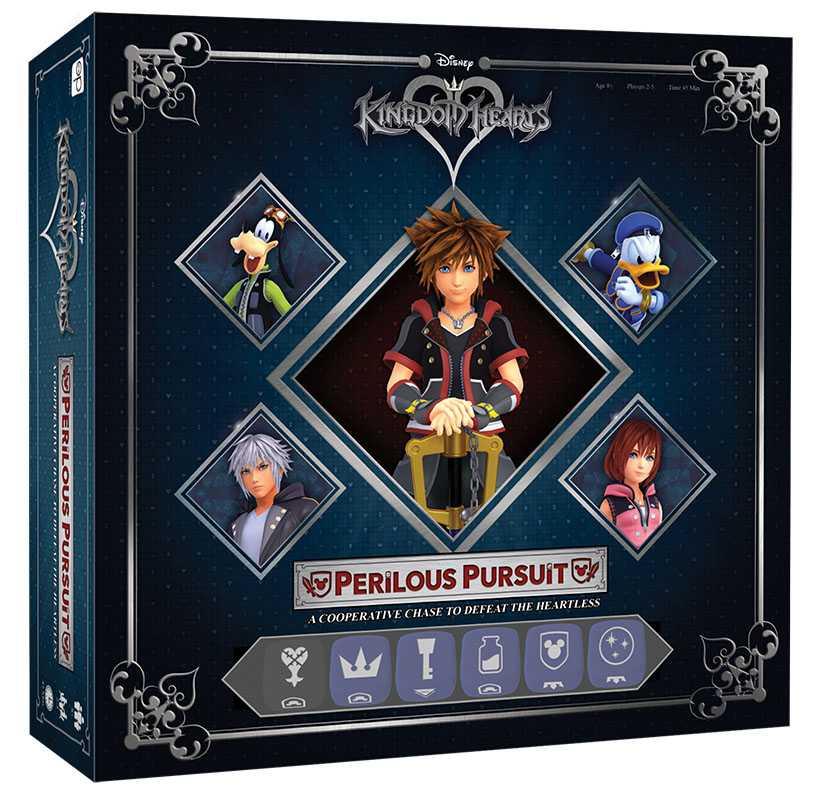 The OP have announced a new board game based on the Kingdom Hearts series. Disney's Kingdom Hearts Perilous Pursuit is a game where players work together using a roll of dice to seal six worlds while trying to keep the Heartless from plunging worlds into Darkness. This game is intended for 2-5 players ages 8 or up.

Players can choose between 5 characters: Sora, Donald, Goofy, Riku, and Kairi. Each character has their own sheet representing five different actions: Attack, Collect Potions, Protect, Ability, and Distract. Each action can be activated based upon a number rolled of that certain action. Item cards can also be used to help your character as well as your friends' character.

"Take on the role of Sora, Goofy, Donald and Kairi & Riku on a journey through the memorable worlds of Kingdom Hearts and rid them of Heartless! Collect sets of dice and work together in this cooperative game based on the hit video game series to take actions to protect each other, attack Heartless, collect potions, and seal the door to save six worlds without letting the darkness take over!"

There are a total of 14 world cards (double-sided) ranging in levels that you can try to seal. Some of the ones shown on the box art include Radiant Garden, Halloween Town, Space Paranoid, Kingdom of Corona, Twilight Town, Land of Dragons, and Deep Jungle.

Each box contains five player boards, 14 double-sided world cards, 30 items cards, 75 chip pieces, a world marker, six dice, and five trackers. You can check out photos of the box and the character/world cards in the gallery below.

UPDATE (August 29, 2021): The official rule book for Disney's Kingdom Hearts Perilous Pursuit has been made available on The OP USAopoly's site. You can check it out here or by viewing the gallery below.

Disney's Kingdom Hearts Perilous Pursuit will be available soon for $29.95 at your local gaming store. You can also buy it on Amazon when it becomes available.

This is the second board games that has been released by The OP. The first one was Talisman: Kingdom Hearts Edition back in 2019.

Will you accept the challenge with your friends in saving the worlds? Let us know in the comments below!