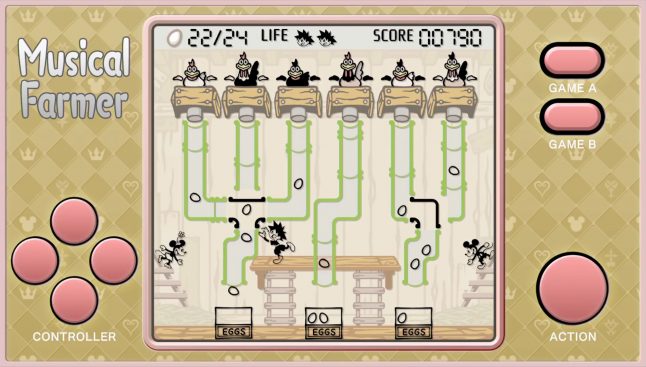 On April 15th, Square Enix hosted the first ever Kingdom Hearts Union χ[cross] Dandelion Meeting, where fans could participate in various activities and meet fellow fans. One of the featured activities was called “Classics”, and was a demo for the Game & Watch-style minigames that would be featured in the upcoming Kingdom Hearts III, collectively titled “Classic Kingdom”. The demo lineup consisted of four available games; Giantland, The Barnyard Battle, Musical Farmer, and The Karnival Kid. In addition, each game was played on a tablet, foreshadowing the later announcement that a selection of the Classic Kingdom minigames would be playable within Kingdom Hearts Union χ[cross].

Due to being one of the attendees of the Dandelion Meeting, I am able to give a written summary on the gameplay of the demo I played, as well as my personal impressions of the demo. Since attendees were lined up to play, we were directed to quickly take our seats, unfortunately giving us little to no choice as to the game each attendee was playing. The game I happened to be seated at was Musical Farmer, and I was given five minutes to play. The Musical Farmer minigame is loosely based on the 1932 Mickey Mouse cartoon of the same name. Within the game, six hens are laying numerous eggs which fall slowly through six pipes. Several of the pipes are joined by a segment that Sora can rotate to complete a given pipe’s path, at the expense of another pipe being blocked off. At the bottom of the three ending pipes, there are three boxes which can each accept up to six eggs. Sora can then descend the ladder and pass the egg boxes to the left or right. If a box is passed to another box’s position, the two boxes swap places.

The goal of the game is to pass egg-filled boxes to Mickey and Minnie on either edge of the screen, increasing the player’s score. After a given number of eggs is reached, the round ends and a new round begins, with a higher amount of eggs needed to complete the next round. If an egg hits one of the aforementioned intersections and cannot continue through the pipe (see pipes 2 and 6 in the above image), the egg breaks and Sora loses one of three lives. The board is cleared, and the player begins again, keeping the same score and amount of eggs collected in the round. A similar situation happens if an egg hits the ground as Sora is passing a box to Mickey or Minnie, or if an egg falls onto a box that already has six eggs. Upon losing all three lives, the game is over, and the player’s score is presumably recorded. (Unfortunately, I can not confirm this last point, as neither I nor the two players adjacent to me lost all of our lives in the time allotted.)

Overall, I enjoyed Musical Farmer quite a lot! While the game is indeed simple in its mechanics, I found it genuinely addictive, and several other attendees I talked to were enamored during their play sessions, as well. The art style is both a faithful recreation of the classic Musical Farmer cartoon (complete with the Timeless River rendition of Sora), and an exact match to the Game & Watch handhelds and others like them. Unfortunately, the venue was quite loud, so I could not hear any music from the game itself, but I would not be surprised if Square Enix decided to use a chiptune version of the music from the cartoon itself, which audibly complements both of the above aspects of the visuals. Hearing something like that would absolutely complete the experience for me! I look forward to playing Musical Farmer again, along with trying the rest of the Classic Kingdom collection!

What do you think of Musical Farmer? Did you get to try one of the Classic Kingdom games at the Dandelion Meeting? Which one do you think will be your favorite? Let us know in the comments below!