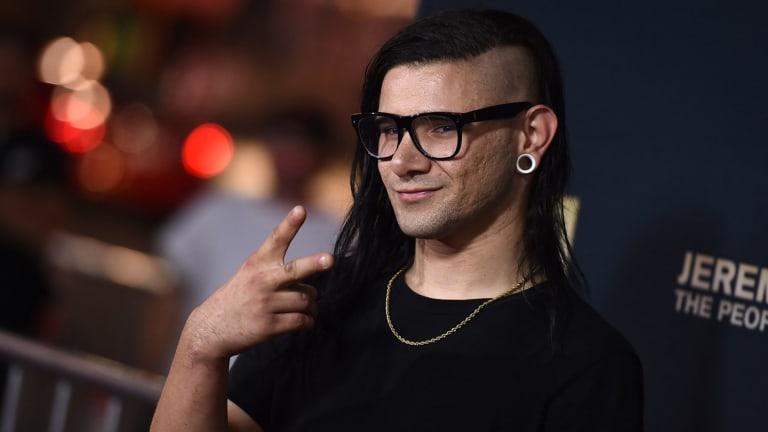 Skrillex talks about producing "Face My Fears" with Utada Hikaru

On the day of Kingdom Hearts III's worldwide release, The Verge published an interview with Skrillex (Sonny Moore), who is credited for producing the game's opening theme "Face My Fears" with Utada Hikaru.

“It sounds kind of crazy, but I always said ‘I want to do the theme for Kingdom Hearts one day.' I told myself that as a kid. I was just such an absolute fan of Utada Hikaru and the games, but that was like a dream of mine.”

Skrillex met Utada Hikaru  in the artists' lounge at a heavy metal festival in Germany in 2013.

Since then, they kept in touch. They caught up in two years ago on the phone when Utada told him that she was working on the theme song for Kingdom Hearts III. She proposed that he could do a remix of it. At the time, she sent him 'Don't Think Twice', which was supposed to be the only original theme song for the game; but Skrillex wasn't sure what he could do with it.

“I love the song, but it was like... I would put it in, and load it up in my Ableton Live, where I produce music, and I didn’t really know what to do with it. It was really hard to touch because I just liked it how it was.”

Last summer, Utada happened to be in London, where Skrillex was working with producer Poo Bear (Jason Boyd).

They went to the studio to try it out.

“I started with these piano chords, and we wrote it in about an hour.”

Skrillex said that it was everything he expected. While working on it, he soundtracked his work with the Kingdom Hearts III trailers.

“I was actually editing and like composing the drop and the beat to all that stuff.”

“I’m really sensitive to the game, you know, and wanted to do it justice. I was really happy with the result.”

The song was apparently finished a year* before it released.

“I’ve never finished a record and mixed it and had it had to sit for like a year. As a producer, I want to like, redo things, make things sound better.”

In regards to Kingdom Hearts, of which he has been a longtime fan, Skrillex said:

“I just really think it’s a perfect sort of blend of action and RPG. It’s like a fantasy as though “what if f***ing Batman and like... Spawn had a movie together.”

Regardless of his work in Kingdom Hearts III, he still didn't receive a copy of the game in advance!

*The times mentioned in the original article by The Verge are slightly contradicting. Skrillex said "Face My Fears" was produced about a year before it released/was put in the game (according to The Verge, a year before it 'saw the light of day'). This contradicts The Verge's retelling which says that it was conceived 'last summer' (2018). It could be that Skrillex was referencing the new year and not a full yearly period of time.

Did you know that "Face My Fears" was written in the same key as "Passion" and using the same chords as "Dearly Beloved"? Read more about it here!

"Face My Fears" is available worldwide; the album song can be bought from the Apple Store, Google Play Music, and Amazon as well as streamed on Spotify. You can also now listen to it in Kingdom Hearts III itself, during the opening cinematics. For lyrics and more information, click here.