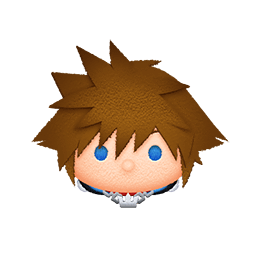 Other LINE stickers have been offered in the past, including those for LINE instant messaging. Currently the Sora and Riku Tsum Tsums are only available in Japan.

UPDATE 1: Sora and Riku have been released for the Disney Tsum Tsum LINE Android and iOS game in Japan! They'll be available until April 30, 2017 for the random Premium Box, which is 30,000 coins. Until April 18, 2017 at 10:59 JST, there will be a higher chance of getting Sora and Riku.

Both of their skills clear surrounding Tsums, but Sora auto clears them for a brief moment of time, while Riku clears them from a fixed number of taps. When they're activated, you can hear their them say their iconic catchphrases. Sora will say his famous line "My friends are my power!" ("繋がる心が俺の力だ！") and Riku will say "I'm not afraid of the darkness!" ("闇を恐れる事はないんだ！") View images of Sora and Riku in the mobile game, provided by @differem7 on Twitter, below:

View a video of Riku's skill being activated, provided by @ninomiy on Twitter, here.

UPDATE 2: An official trailer for Sora and Riku's appearance in the LINE Disney Tsum Tsum Japanese iOS and Android game has been released! This trailer shows off both Sora and Riku's skills being activated. View it, provided by the official Japanese Disney Twitter account, below:

UPDATE 3: Sora and Riku are coming to the international version of the LINE game Disney Tsum Tsum in the month of September. They will be available on September 14-17 and September 25-28. You can only obtain them with the Premium box, which can be purchased for 30,000 coins each.

Thanks to jutcdeenc and KHInsider for the tip!