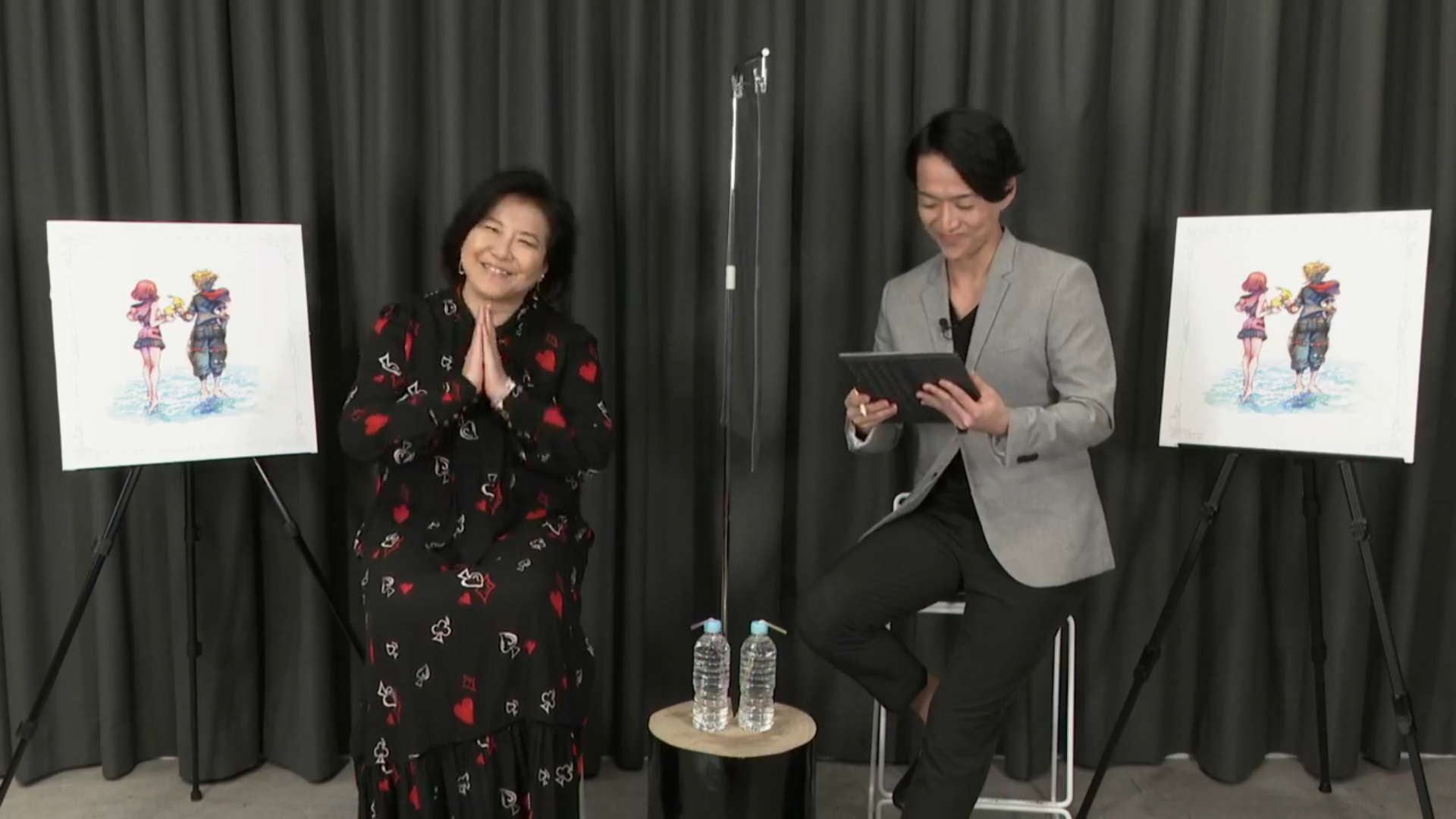 The Facebook Live Q&A with Kingdom Hearts series composer, Yoko Shimomura took place on October 23rd! We have chronicled the questions and answers here for convenience. Keep in mind that these answers were given in English by a live translator during the event.

You can take a look at each question and answer below:

Q: Was there a moment when you decided you wanted to pursue making music for games?

Shimomura: Yes, simply put, I had a love for music ever since I was small, and at the same time games became one of my biggest hobbies. I thought of a job that could use both games and music. Being a game music composer is the perfect job for me.

Q: Which musicians, past or present, inspire you, and why?

Shimomura: I have many composers who I dearly love but my number 1s would be Chopin and Rachmaninoff. People who have listened to my music can probably see the influence I have gotten from both of those composers.

Q: If you could play one song of yours for someone who had never heard of Kingdom Hearts, what song would it be, and why?

Q: You've been working on the series for almost 20 years, Shimomura-san! How has this experience influenced you as a composer?

Shimomura: While working on Kingdom Hearts,  I know that many fans like this series, like my music, and all of you fans' cheers, your voices, your comments, they really cheer me up at times in my personal life when I have some hardships to overcome. Your voices always help in cheering me up, and it really motivates me to always proceed forward. So I would like to express my deepest gratitude to all my fans who love my music.

Q: Who is your favorite Kingdom Hearts character?

Q: "Dearly Beloved" is one of the most important pieces in the entire series. When you are tasked with composing for a new game, how do you come back to this theme and go at it with a new approach each time?

Shimomura: I always think about what to do for each and every version, each and every game. And so I try to think fresh and new, so for example for [Kingdom Hearts] I and II, I would have this image, and for [Kingdom Hearts] III, I would have this image, so I would have my own personal image first. I will build my image first, then next I would clear out my mind, and try to cultivate all the images of the game I’m working on within me, and to let it all out. That is what I do.

Q: Which battle soundtrack was your favorite to compose and why? I always get so pumped up for boss battles listening to the music!

Shimomura: So I have to choose again. It’s really hard for me to choose the best battle song because I have put all my emotions into all the songs. But if I have to choose one it would be  Xion’s "Vector to the Heavens". This is because a lot of fans say that this is their favorite song. People tell me that it really moves their hearts and it really makes them cry. I’m really happy that all my fans think that way, and because it is my fans’ favorite I’m going to have to go with "Vector to the Heavens".

Shimomura: The fact is I have been a big fan of Disney music and the world of Disney ever since I was small. Even the new movies, the new atmosphere, and the worlds I adore. But If I listen to the music too much it will be very similar. I will get too much influence form the music itself. So as I said with "Dearly Beloved",  what I try to do is have a lot of input regardless of genre watching, movies, listening to music and to fill myself up with a lot of inspirations; then to think of the image for Kingdom Hearts and to let my image, everything I have to put into myself, flow out. Yes it is very hard at times, but the creation process is really a joy for me.

Q: You have picked 10 songs from the new Kingdom Hearts III soundtrack, can you tell us a bit about each of them?

"Dearly Beloved" (Kingdom Hearts III Version)  - As I have been explaining throughout this session it is the title iconic song, it’s a song that is played on the title screen so I think it is very iconic and it is currently the latest version of Dearly Beloved.

"Toy Box Jam" - My image for KH is filled with bright and fun battle music so that is why I chose the "Toy Box Jam".

"Monstropolis Now" - It's a fun song with a little bit of a comical touch and you get the image of monsters waddling and walking so that is why I chose this fun number.

"Frozen Wonderland" - At first I thought I might have a little bit of a hard time thinking of a tune because of the image of Frozen being so big, but once I started working on it, it was pretty easy.  The image of ice and snow, I think I was able to put that image into the song, and since the Northern Hemisphere is entering the season of Winter I thought this tune would be perfect.

"No Surrender" - This is one of the boss songs, and the composer who I worked with, Mr. Ishimoto, worked on most of the boss songs. I wrote two boss songs within this game so that is why I chose this fifth song.

"Stranded Beyond" - This is a lonely, melancholy tune with the image of heading towards the end, this is the sixth number I chose.

"Edge of Existence" - It's a battle song but its not so heavy and not so drastic. It really conveys the feeling of moving towards the end. The feeling of “yes it’s entering the last phase” is really expressed in this number. So again this is a nuance I can’t explain with words but I really like the atmosphere this tune is trying to express.

"Nachtflugel" - This is a new piece I wrote for Re Mind DLC. This is a very Piano concerto-ish piece in which I had challenged myself.

"Wave of Darkness I" - I decided to choose numbers from every disc and this is a song from Kingdom Hearts II.8. I have really fond memories of this number because I was blessed with the opportunity to play it live with the orchestra with a music video playing in the background, so I really have good memories with this. And also because it’s from KH 2.8, I have this image that this tune is kind of a bridge that goes across to KH3. That is why this is a very dear tune for me.

Q: I would like to ask Shimomura san for her comments regarding this digital release to the whole world.

Shimomura: It’s really a great honor for me that such vast amounts of my music are being released digitally world-wide at the same time. It means a lot that all of you fans can have access to all of my music at the same time. I’m very honored, and I’m happy that many fans will be able to listen to my music that will be digitally released. I don’t think this can happen all the time, digitally released, global, at once, I’m very very honored.

Q: Could you give a message to the fans watching about this exciting digital release?

Shimomura: Thank you very much for this. I have to apologize that I kept you fans waiting after the release of the game itself, but it is very high in volume with a lot of songs, not only from KH3 but also from the DLC and also the numerous music pieces from games that had not yet received a soundtrack are all included in this digital release. Lots of music means lots of time for you to listen but I sincerely hope you take your time to listen to my beloved music and to also spend your time finding your favorite song from this soundtrack.

Did any of Shimomura's responses stand out to you, and if so, which one(s)? Let us know in the comments below!