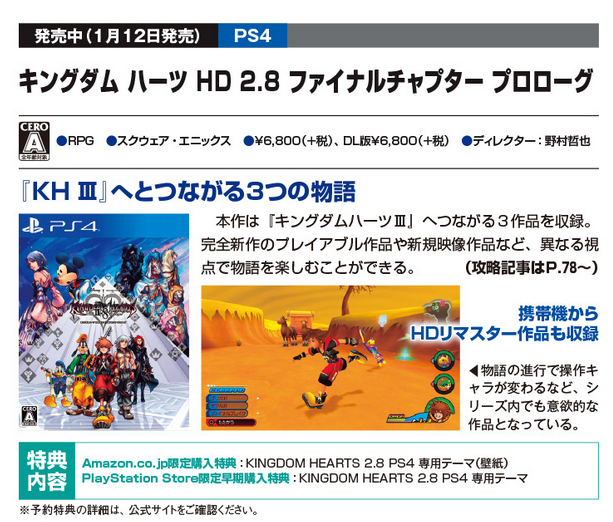 In their most recent issue, Dengeki PlayStation included a 10-page feature on Kingdom Hearts HD 2.8 Final Chapter Prologue. The spread features screenshots and several game tips regarding both Kingdom Hearts Dream Drop Distance HD and Kingdom Hearts 0.2 Birth by Sleep -A Fragmentary Passage-. A brief promo for Sora's inclusion as a Champion Summon in World of Final Fantasy was also included.

Additionally, Dengeki PlayStation interviewed Kingdom Hearts series composer Yoko Shimomura, speaking with her about her involvement in the game's soundtrack.

The interview has now been translated thanks to @goldpanner. You can view it below.

Ms Yoko Shimomura (hereon shortened): There were fewer new pieces compared to before, but I did do some.

— Ms Shimomura, you were also in charge of new songs for FFXV. Was it extremely hectic with the jobs overlapping?

Shimomura: I started the brunt of the work on KH2.8 after work on FFXV was basically finished, so it didn't get to the point of biting off more than I could chew. There was a period where I was very busy, though.

—We could really feel the Shimomura magic in the pieces that play during KHBC and the last boss battle in KH0.2.

Shimomura: Thank you! Every one of the new tracks passed the harsh inspection of Mr Tetsu (KH series director Tetsuya Nomura). When the wind orchestra performance in Tokyo had just finished, just as I was about to head to the after party, I got a scary call from Mr Tetsu about a track… The memories…

—Among the new pieces, are there any that particularly left an impression on you?

Shimomura: There is one absolutely amazing track! It's a piece that takes a route never before done in the KH series, and the piano adlib is amazing.

—In which specific scene does the music appear?

Shimomura: It's the music that plays during a scene in KHBC where the Master of Masters is speaking to Luxu. It's the Master's theme song, and it's actually a much longer track, but only one part plays during the cutscene. The feedback I got the first time I made and and sent for review a theme for the Master was, "This piece itself is good so we will use it somewhere else, but this isn't how the Master's theme should go." It was a piece I finished after a long and gruelling battle.

—The theme for the final boss battle of KH0.2 is so fiery, listening to it really pumps you up.

Shimomura: When making battle music, I pay attention to setting things in a balanced way that pumps you up without making you sick of it or hurting your ears. I can't let the song sound like I'm shoving how cool I think it is in your face. That's self-complacency. But having said that, I can't let it feel like I'm holding myself back, either, so it is pretty hard. And, I have to be pumped up myself first before I can make music that pumps people up, and that mental control is another way battle music is difficult. By the way, the final boss battle music was an arrangement done for me by another individual, so there are two versions recorded.

—For previous HD remasters, you arranged the music of KH Final Mix and KHII Final Mix for HD. Did you arrange any pieces for KHDDD?

Shimomura: It is the exact same soundtrack from the original KHDDD. It has to do with hardware; back in the days of KH1 and KH2 the soundtrack played from a built-in sound generator. The sound quality is no good when you re-listen now, so I had to arrange them to fit KH1.5 and KH2.5. KH Birth by Sleep onward uses streaming, where the recorded source audio is inserted, so the HD versions don't need anything in particular to be processed. Thinking back on the old days, I used to compose for KH1 and KH2 on the PS2 while planning how the music would be set and played in the system memory, and things like that.

Shimomura: I myself was in the brass band in high school, so the wind orchestra gave me all the emotions! All the pleasant thoughts I heard from those who attended after the First Breath performance are a special memory too.

—It's surprising that there hadn't been one until then.

Shimomura: I'd wanted to do a KH concert for a long time, and there'd been talk of doing it many times, but nothing ever came to fruition. KH is a huge title, so settling upon doing it is only the first of many hurdles to clear. When planning began, I was already able to see so many hurdles that I wondered if it'd be impossible after all, but as things moved forward I found I was clearing them surprisingly easily. But that absolutely wasn't because of me, it was because everyone around me was working so hard.

—The orchestra concert world tour is going to have its first performance in Tokyo, then make the rounds across each country, right?

Shimomura: The first performance being in Japan was on my firm request. According to the pro instrumentalists, most orchestra concert tours so far have begun overseas. But KH is a game created in Japan, so I thought that if we are going to have a concert then we have to start from Japan. Fulfilling my wish, two concerts were planned right away, and I couldn't have been happier. Then I heard that the orchestra was going to play at the Tokyo International Forum (Tokyo performance), and then have a world tour after that: the surprises kept coming!

—As the very first orchestra concert for KH, we're sure the fans are paying very keen attention.

Shimomura: Performing at the Tokyo International Forum is an enormous pressure, and I did wonder what on earth we'd do if the tickets didn't sell (laughs). To my great gratitude, we ended up in the unprecedented situation of deciding to do an encore show before tickets were even open for booking, so I am endlessly thankful for the reaction from the fans.

—It will be interesting to see how the fans overseas respond, won't it?

Shimomura: Overseas they tend to give energetic and straightforward reactions, so I'm looking forward to it. People respond very differently in different countries, even just within Asia. For example, my strong impression is that they tend to show big reactions in China, while in Taiwan, if I had to I'd say they give a quieter impression like us Japanese. I think this is just the nation's personality, so I would love for those who are able to attend the Japanese performance to not worry about standing ovations and simply enjoy themselves. We will be visiting seven countries including Japan, so I am really looking forward to what sorts of reactions I'll get to see in each place!

—How is preparation for the orchestra concert?

Shimomura: We are working our butts off to get ready for the opening show in March. Aside from one part the setlist is entirely different from First Breath, so I'm hoping even those who joined us for First Breath will have a lot of fun too!

—What did you focus on when thinking up the setlist?

Shimomura: This is true of any concert, but I picked music with the thought that I wanted to give the listeners the visceral feelings of playing the games. There were also things to consider from the angle of the order of performance, like, this piece sounds better on wind, or we absolutely have to do this one with the orchestra. On top of taking all those sorts of things into account, I like to be able to bring out a drama-like vibe in the concert as a whole. That's a point I focused a lot on with both First Breath and this orchestra.

—Was Mr. Nomura also involved in choosing the music?

Shimoura: I chose the music and created a setlist, which Mr. Tetsu checked for me, and then I'd listen to his requests and give my own opinions. That's the general flow of how we decided things. Since Mr. Tetsu and I both chose music with the same line of thinking—that we wanted to make our fans happy—I am confident in the setlist I have for you all. By the way, Mr. Tetsu had said he wanted the wind orchestra and the orchestra concert to have a "two in one" configuration. Mr. Tetsu is also the supervisor of the movie that is going to play in the hall, so please look forward to that.

—Is Mr. Nomura also planning to surprise us with his own performance, like he did at the First Breath concert?

Shimomura: I'm not sure about that (laughs). We were very, very much obliged to the pianist for letting him use their seat… Besides, all the pieces this time are pretty hard (laughs).

—A message for the fans, please!

Shimomura: My long-time dream is coming true: we are finally able to hold the first independent Kingdom Hearts orchestra concert. It's thanks to fifteen years of support from the fans that we are even able to do something like this, so we are preparing something that will be able to repay you with everything we have. Giving the fans a great time was my top priority while making the setlist and arranging the music, so let's savour the moments together on the day!