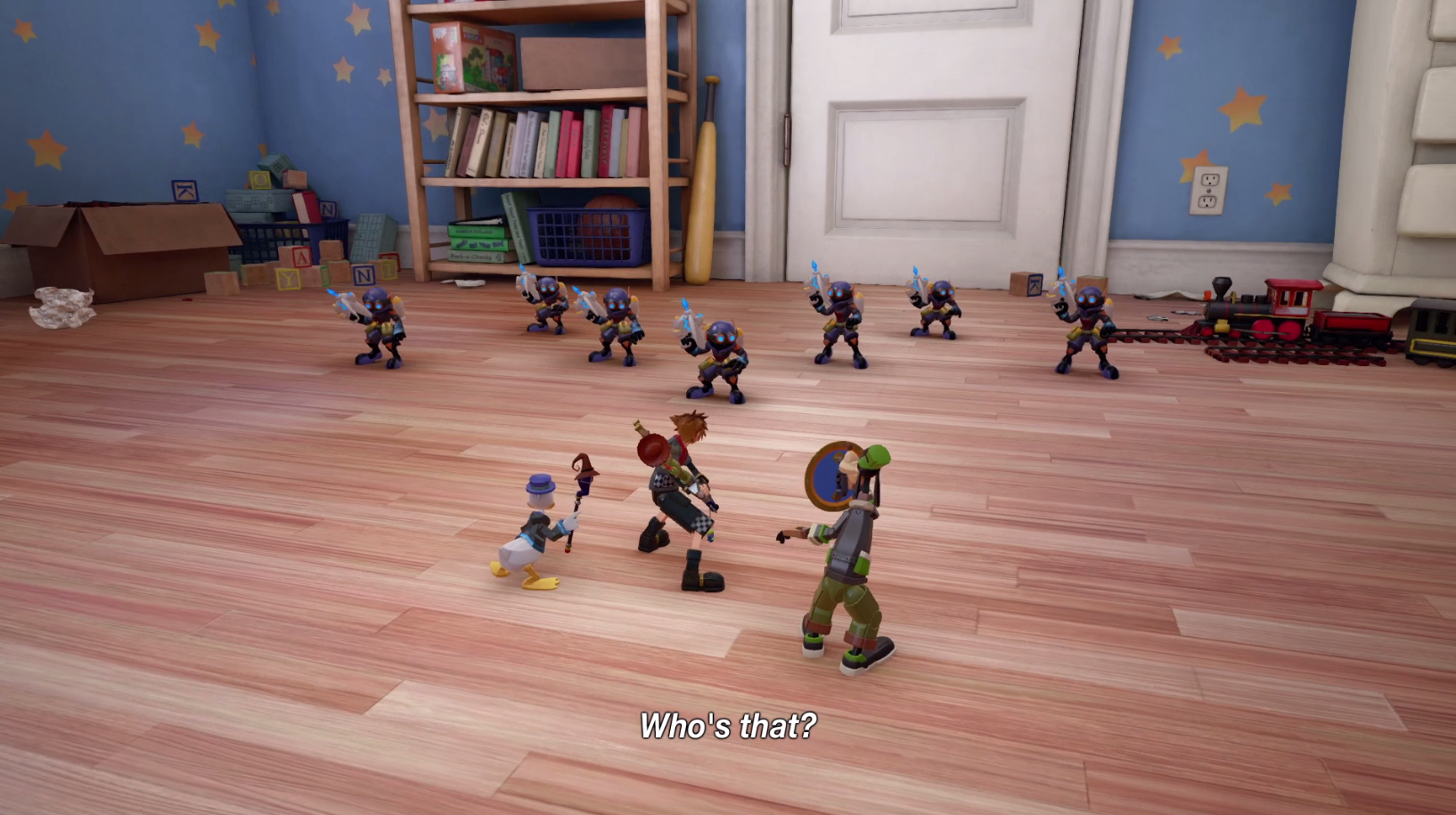 Famitsu has released its latest weekly issue today, showcasing a 12-pages feature on Kingdom Hearts III in light of its newest trailer and Toy Story world announcement at D23 Expo 2017 in Anaheim, California. The feature talks about the events that unfolded at the Expo and the latest trailer, and includes an exclusive interview with series director Tetsuya Nomura.

We have already published a summary of highlights of the feature, including discussion points on the plot and characters in Kingdom Hearts III, information about its worlds and gameplay, and upcoming updates on the Kingdom Hearts Union χ[Cross] story.

You can read the summaries here and here, and look at the scans of the magazine below:

You can read the full translation of the interview below:

Director Tetsuya Nomura sat down to talk to us this time about the Toy Story world, the feel of the battle

–- The release window has been announced! You said 2018...anything more specific?

Nomura: As expected, please wait for the follow up report. (laugh)

Nomura: The catchphrase was added after editing on both trailers, but since Sora begins with diving and sliding energetically. I absolutely wanted to close with the words "jump in." Based on that, I thought about the original catchphrase, and returned to the original concept of KH. I argued that the Toy Story world was absolutely necessary in KHIII. As I was setting up for the first Kingdom Hearts game, I was talking through the various parts of the story...that was long ago. (laughs) John Lasseter was in Japan, and I was asked to tell him about the specifications, and tell him what I wanted to include.

--- Is this during the first Toy Story movie in the timeline?

Nomura: The Toy Story world has an original story that cuts out [from the timeline] after the second film, Sora and company aren’t tied up in the [film stories]. It’s not a parallel setting. Events in KHIII will also be included in the Toy Story series timeline.

--- In a sense, this is a new Toy Story tale. What kind of story are you developing here?

Nomura: In the opening, Sora will be mistaken for a character from the latest game released in that world. Although it’s not in the trailer, the dinosaur toy Rex sees Sora and mistakes him for that game character.

--- Sora seems to be a toy based on that character, huh? Sora and company’s designs all seem like toys.

Nomura: The KH team’s art director repeatedly interacted with the other side to give the design we have now. At first, we were hoping for a design more like an action figure, but from the other side we got advice to match the aesthetic of the world of “Toy Story” as much as possible. I got a lot of suggestions from various people in charge of the story, settings, characters, etc. until the world was completed. There was stubbornness on both sides, so we had to take a lot of time to discuss until we settled on this design, where both sides are satisfied.

--- Because of that, the characters from the original films, including Woody and Buzz, look just like the original animation.

Nomura: Although we had the sample data, I didn’t think it would reproduce so well in the game. The staff was shocked. Thanks to the considerable improvement in expressiveness in KH so far, each world can have it’s own unique visuals, gimmicks, etc. that are all different. It’s kind of like making a lot of separate games at the same time—it’s hard. (laughs)

–- I see. This time, the big topic of this trailer is the public reveal of the Toy Story world. I was waiting for it, and felt like "It finally came!"

Nomura: It’s the same for me. It’s a world I wanted to put in since KH2, so now that it’s finally been realized, I’m having some really deep emotions.

-- What makes you decide to show Toy Story trailer at this event in particular "D23 2017?"

Nomura: We couldn't show much of the new worlds during the last D23 because of Disney so we decided to show the Big Hero 6 world because we could only show one image, we originally wanted to show the Toy story world back then.

Nomura have also shed light on some points that were mentioned previously in some other interviews, such as:

- They wanted to follow on KH0.2's path and make it so that you could chose what to do next while continuing the fight. It may seems hard at first sight but it's actually pretty simple.

- You won't be forced to use a specific Keyblade in order to beat a boss, this way each player can use the one they prefer.

- Every character's story will be settled, and this will involve members from the former Organization XIII.

- Nomura is involved with many titles, such as a character designer, but he is directing nothing besides the announced titles (KH3 and FF7 Remake.) Some people are mistakenly crediting him as the main character designer for Xenoblade Chronicles 2.

- The world where Young Xehanort and Eraqus are at is an original Kingdom Hearts world and there will be less Disney worlds than KH2, but with more playable content in them.

- The story will be dark, but there are no plans for ending everything at once.

- The Kingdom Hearts Union χ[cross] fifth Union leader chapter has been written and it will be released early August, the character is going to be cute.

- On the next KHIII reveal, they will try to focus on showing the battle more. "Different battle situations."