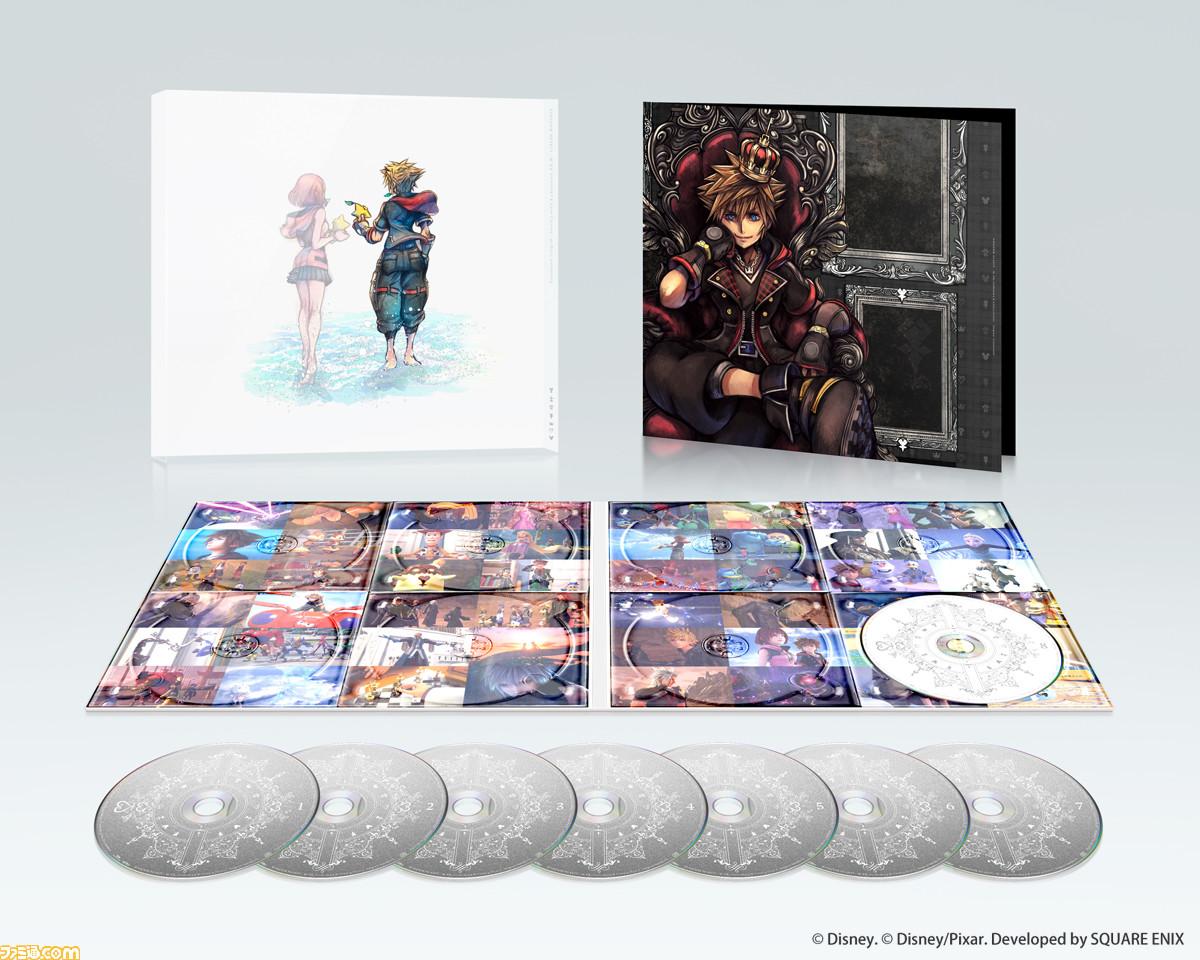 A brand new Famitsu interview was released with Kingdom Hearts composers, Yoko Shimomura, Takeharu Ishimoto and Tsuyoshi Sekito! This interview mainly covers these composers' overall thoughts on the Kingdom Hearts III soundtrack along with its development.

Take a look at some of the important bits of the interview translated by our team's Ryuji! We will update this article once more parts of this interview are translated.

Interviewer: Finally, the long-awaited KHIII Soundtrack is going to be released soon. The album contains 8 CDs, which is an impressive volume, if I do say so myself.

Shimomura: Combining the amount of tracks in the "numbered KH titles" [that is, KH1 and KH2, not counting BBS, Days, etc.] was around 100. However, since this time around we decided to include all of the songs in the entire Seekers of Darkness saga, as well as the tons of different arrangements and versions, I imagined it would pass 100 songs easily, and not fit in a single disc....To be honest, I didn't even count how many soundtracks were in total. (laughs)

Interviewer: There are new arrangements, but there's also the songs that left a strong impression on fans, such as the track that plays during the Keyblade Graveyard fight. Now that one was very heated!

Shimomura: Thank you. The soundtrack that plays during Xemnas, Ansem and Xehanort, "Forza Finale" [means "last force" in Italian] was composed by Yasunori Nishiki, and even I was truly in awe when listening to it. The soundtrack that plays during Master Xehanort's final fight in KH3 [specifically, during the part where he summons the χ-blade], "Dark Domination", was a collaboration between original melodies I wrote in the past and new elements from Ishimoto, and I believe it turned out to be an amazing song!

Interviewer: The disc also contains the songs that play in the worlds. There are some beautiful songs among them.

Shimomura: The battle songs and the field songs of each world were separated across different discs, and I honestly disliked such a thing. I proposed that each world's songs should be compiled together, and not separated like books in a library. Especially since the arrangement of the battle song is similar to the one you listen to in the world, so why separate them?

Interviewer: Did the recent Coronavirus outbreak affect negatively the production of the soundtrack?

Shimomura: Before the outbreak even began, most songs were already done, and since most of us would record in a studio and then listen and fine-tune at home either way, I don't think there were many critical issues.

Interviewer: Have there been any times where you had to do a re-take of a song?

Sekito: No re-takes were necessary on KH3's songs but if there's one song that got so many retakes, it was Kingdom Hearts Unchained X's [Now called Union Cross]  "Mission Complete!" I remember we had to re-take that song EIGHT times. (bitter laugh)

Shimomura: You see, the KH series can't be too "Final Fantasy-esque" so I think that was probably why the song had to be redone so many times.

Interviewer: What was a soundtrack that you feel needed extra attention in its composition? (Sekito's answer)

Sekito: For me, that would be the song that plays during the dancing minigame in the Kingdom of Corona, "Sunshine Dancer". Since that song starts with a very fast tempo, and I wondered: "Is this even possible to play?", I went out and asked Mitsushiro Ota.

Interviewer: If I recall correctly, he had worked on Final Fantasy XV's soundtrack, correct?

Sekito: Yes. Since the song had its roots in folklore, I asked his team to play the song. Guitars, violins…everything was played by his team. The song came out perfectly. If you get the soundtrack, please listen closely to it, as I know you'll feel the professionalism in the song.

Interviewer: What was a soundtrack that you feel needed extra attention in its composition? (Ishimoto's answer)

Ishimoto: For me, it was the Caribbean world's "Flags of Fury". I composed it with the intention to make the intro stick in your head. I would appreciate it if the intro was the part that you remember most from the song.

Interviewer: What was a soundtrack that you feel needed extra attention in its composition? (Shimomura's answer)

Shimomura: It's hard for me to pick just one for various reasons…but if I had to pick, I would choose Yozora's theme, "Nachtflügel". It's the last song I wrote for KH III and I think it came out amazing for various reasons. And it was a nice challenge after composing songs such as "Dearly Beloved", "The Other Promise", and "Vector to the Heavens". I think "Nachtflügel" represents Yozora very well, and that's important.

Shimomura: …Though this is not related to the song itself, I feel like if you cut a song midway, you really lose the flow. There was an incident where I was playing a song to compose and then suddenly, the power went out.

Interviewer: Oh my! Did the data get corrupted/damaged?

Shimomura: Oh, the data was just fine. It's just…I had completely lost the flow of the song, and thus, I had to replay the song from the beginning, in hopes I could get the flow back. This sort of thing happened before when I was composing "Destati" and I was like "I need to try and not lose the flow…!" but that…didn't help.

Interviewer: Why did you go for foreign language names for your song titles? (i.e. French for "Musique pour la tristesse de Xion", Italian for "Destati", German for "Nachtflügel")

Shimomura: It was our plan to release KH worldwide, so I felt that if we put the titles in Japanese, we risked losing out on their true meaning if they got translated to English or French, due to how ambiguous Japanese can sometimes be. The language also helps set the mood for the song. For example: Xion's theme, "Musique pour la tristesse de Xion" [which means "song for the sadness of Xion" in French], is a theme that has "sadness" in it, and I felt that the word "tristesse" in French fit way more than the English words of "sad" and "sadness". Yozora's theme means "Yoru no tsubasa" [night wing] in German, but translating it in English as simply "Night Wing" or "Mirror of Night" would look…too simple and not fit his character at all, I feel. Because Yozora is a character with a different perspective of the world, I thought German for his song would fit perfectly. So here's a pro tip I give: When titling your compositions, focus on giving a title that justifies the feeling of your song. And also, don't fear using puns.

UPDATE [13/12/2020]: We have updated the translation after spotting a mistake. The updated parts have been highlighted in red.