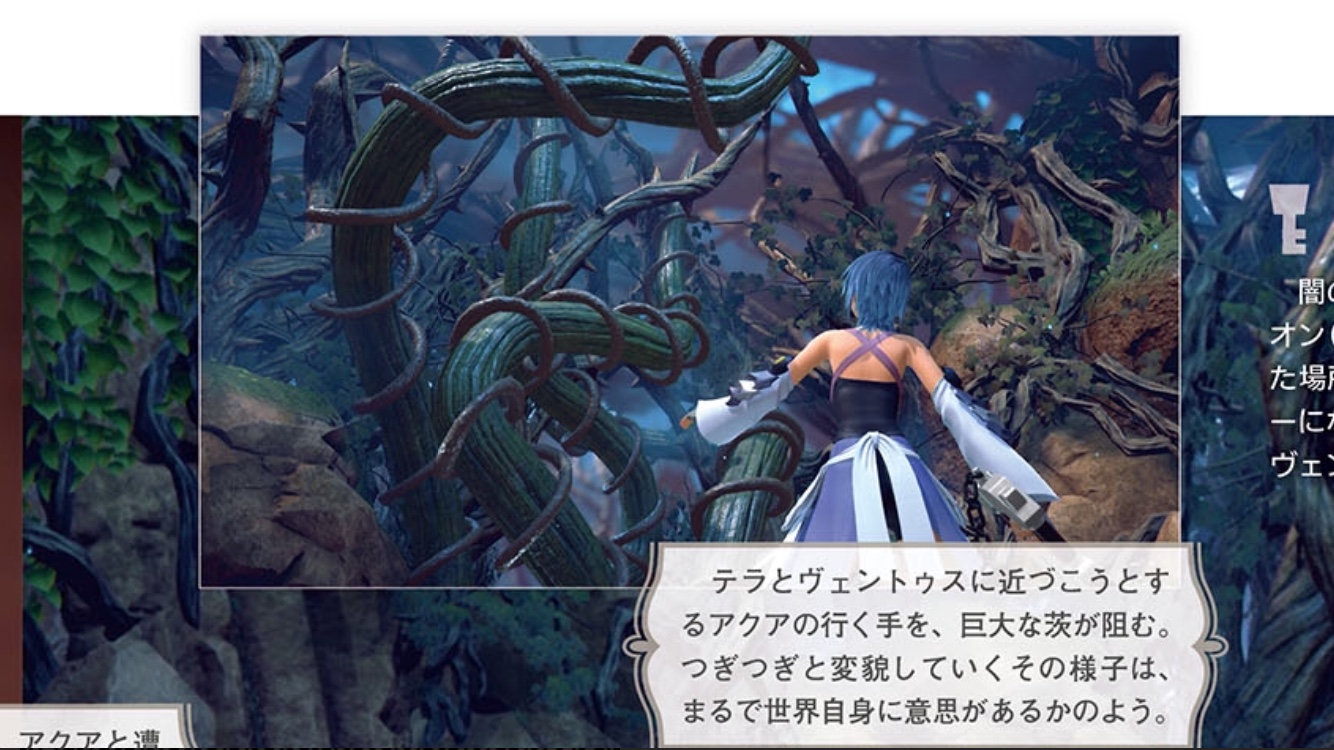 Eight screenshots are featured in this spread, including some which were previously revealed by Weekly Shōnen Jump, the Kingdom Hearts 0.2 BbS AFP opening cinematics, and the Famitsu's Twitter account. Two new screenshots show gameplay of Aqua wandering in the Enchanted Dominion section of the Dark World, with her surroundings full of thorns. One of these screenshots features a Darkside waiting ahead. The screenshot featuring Ven shows a much clearer color difference from his original outfit.

A previously revealed render of Aqua is also available, along with a new render of King Mickey Mouse holding Starseeker.

You can view pictures of the spread in high quality below. Translations have been provided thanks to Catherine Mueller (nichiei.translations@gmail.com) and can be found below.

Aqua has fallen into the Realm of Darkness for the sake of her friends. In this all-new episode, she will chase after the truth of this battle.

When he visited the Realm of Darkness, Mickey talked with Aqua, who was lost. In this realm of being isolated and struggling alone, what kind of encounter did they have?

A second meeting in a familiar world!?

As she traverses the Realm of Darkness, Aqua steps into a world resembling the motif of Enchanted Dominion (of Sleeping Beauty). There, Aqua sees the figures of Terra and Ven, the friends that she struggled alongside in order to become a Keyblade Master. Is this some kind of trap, or is it...!?

As Aqua's hand neared Terra and Ventus, a large thorn stopped her. The way the world continued to change made it seem like it had its own intentions.

One of the Keyblade Masters. She is strong-hearted and serious, with a calm demeanor, but her heart is gentle, and she loves her friends very much. In order to save her best friends, she fell into the Realm of Darkness.

This is one scene from the opening movie. As the first in the [KH] series to use the PS4, improvements are obvious in the beauty of the cinematics.

In [KH0.2], they are utilizing the same gameplay system that we'll see in [KHIII], and you can enjoy battles where the characters move smoothly. Exhilarating action is just ahead!

The king of Disney Castle. He protects the worlds as a Keyblade Master. The Keyblade is a legendary weapon that can only be used by chosen wielders.

-KH Re: Chain of Memories