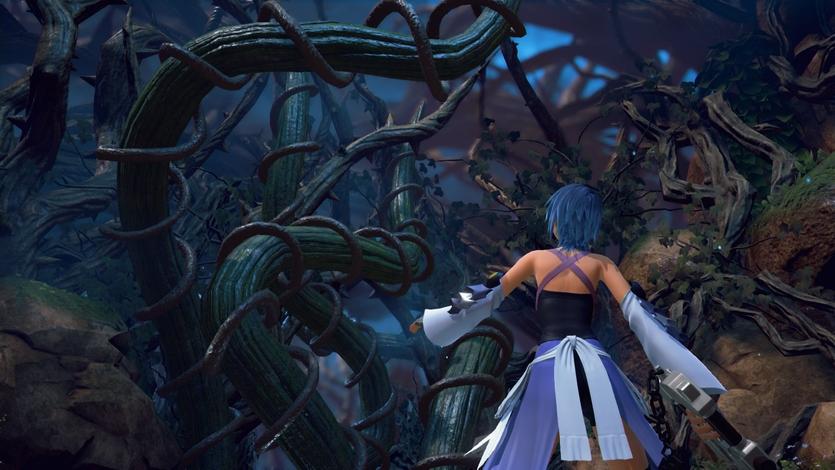 Among reviews for various other new games, Hokanko Alt's look into Famitsu's review for the game gives fans a few new insights into Kingdom Hearts HD 2.8 Final Chapter Prologue. Thanks to aibo_ac7 for the tip!

Their review starts off by saying that Dream Drop Distance HD took around 35 hours to clear, while Birth by Sleep 0.2 -A Fragmentary Passage- took around 3 to 4 hours. It also goes on to say that depending on individual play style, that time can easily be doubled.

It also says that the Kingdom Hearts HD 2.8 Final Chapter Prologue is a great build up for Kingdom Hearts III and also say that Dream Drop Distance HD almost feels like a full remake. The 60 FPS is very smooth and the play is comfortable. They also highly praise Birth by Sleep 0.2, but also say that they wish there was just a little more volume to it. Not much was said about Kingdom Hearts χ Back Cover other than it is definitely worth seeing.

Their final scores for the whole collection are 8/9/8/9.

Update: The full review is now available from Famitsu Weekly. Translations and scans can be found below with translations provided by Catherine Mueller (nichiei.translations@gmail.com).

A record of three tales that tie into the upcoming [Kingdom Hearts III]--the brand-new short story [0.2], the theatrical production [X BC], and the 3D HD remaster of the 2012 release [DDD]

[DDD] has a clear time of 35 hours, [0.2] will take about 3 to 4 hours to clear, depending on one's play style--you can enjoy it even longer than that

This is content that really is steered toward the series fans with the HD remake, along with its new short story and theatrical production. Since this is the first series title to be released on the PS4, by exploring with the short title [0.2], we strongly feel that you will be able to feel even more hopeful for the release of [iII]. I'm happy to be releasing three different productions on this system, but when you all understand the weight of it more, that will be even better.

In order to strengthen the hopes of the fans, we're releasing these three totally different productions that will all tie into [Kingdom Hearts III]. I'm fascinated by the new story we can see in [0.2] with Aqua, and it's the best feeling seeing each of her actions flow together. I have a good feeling with [X BC], too. The “free flow action” in [DDD] is exhilarating, and I'm happy that the play style has become so pleasant with the improvement to 60fps.

With movements as smooth as flying through the sky, playing in a fighting style that heavily relies on magic goes well with Disney worlds. The remaster of [DDD], which has a more cartoonish touch, is of course included in this, and so is [0.2], which seems like a movie on the PS4--I really felt that feeling again watching them. In regards to the things we've used in the stories thus far, it may leave new users a bit hazy at first, but they do not hinder the player's ability to enjoy the games.

This is a great product to review the story that will connect us into [iII]. The world of [Kingdom Hearts] that's shown on the PS4 is, as expected, brilliant. Since [3D] has been remade in full to HD, if you feel the wonder in that, please buy it. Several things in the game make it easier to play, and I'm happy to see that the new production [0.2] is included as well, but I do wish that one had a bit more volume.

Buy it this week!

If you're a fan lying in wait of [iII], [Kingdom Hearts HD 2.8] is a title you can't miss. [sTEEP] is an important title in which you can explore an open world in the snowy mountains. Also, for those using the PS VR, in [Roller Coaster Dreams], you can make an original jet coaster and fly around. (Ranbu Yoshida)

First is [New Dangan Ronpa V3]. There are a lot of new nuances added to the “school trials,” but it's nice that it hasn't become more difficult. [Kingdom Hearts HD 2.8] is definitely one not to be missed by its fans. [Treasure Defender] is a game you'll want to play over and over until you have cleared the game without losing a single treasure to the thieves. (Jigoro Ashida)

What do you think of the reviews coming in so far for Kingdom Hearts HD 2.8 Final Chapter Prologue? Let us know in the comments.