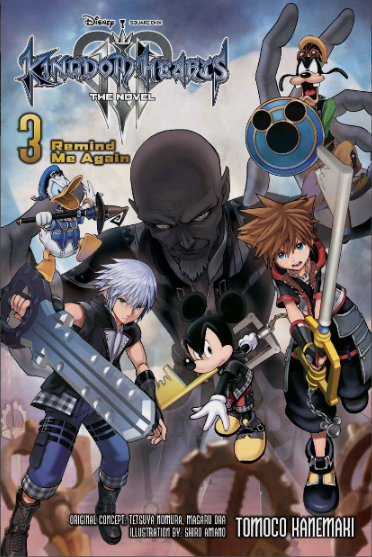 Kingdom Hearts III: The Novel, Vol. 3: Remind Me Again is now available in paperback and digital

Kingdom Hearts III: The Novel Vol 3: Remind Me Again is now available in English for purchase as a paperback and digital from Yen Press. The novel is 162 pages long and contains events from Kingdom Hearts III from the Caribbean up to the secret episode of Re:Mind. It will cost $15.00 (US)/$19.50 (CAN) for paperback or $8.99 (US)/$10.99 (CAN) digitally.

"The final battle against Xehanort is nearly here, and Sora is running out of time to find the power of waking. After he, Riku, and Mickey finally bring back the last guardians of light, he’ll be ready to take on the mastermind behind it all and his new organization. But the battle ahead won’t be easy. Many of the guardians are fighting to regain something they’ve lost—while others still have much to lose.

Don’t miss the dramatic conclusion to the Dark Seeker Saga, including the events of Kingdom Hearts III Re Mind!"