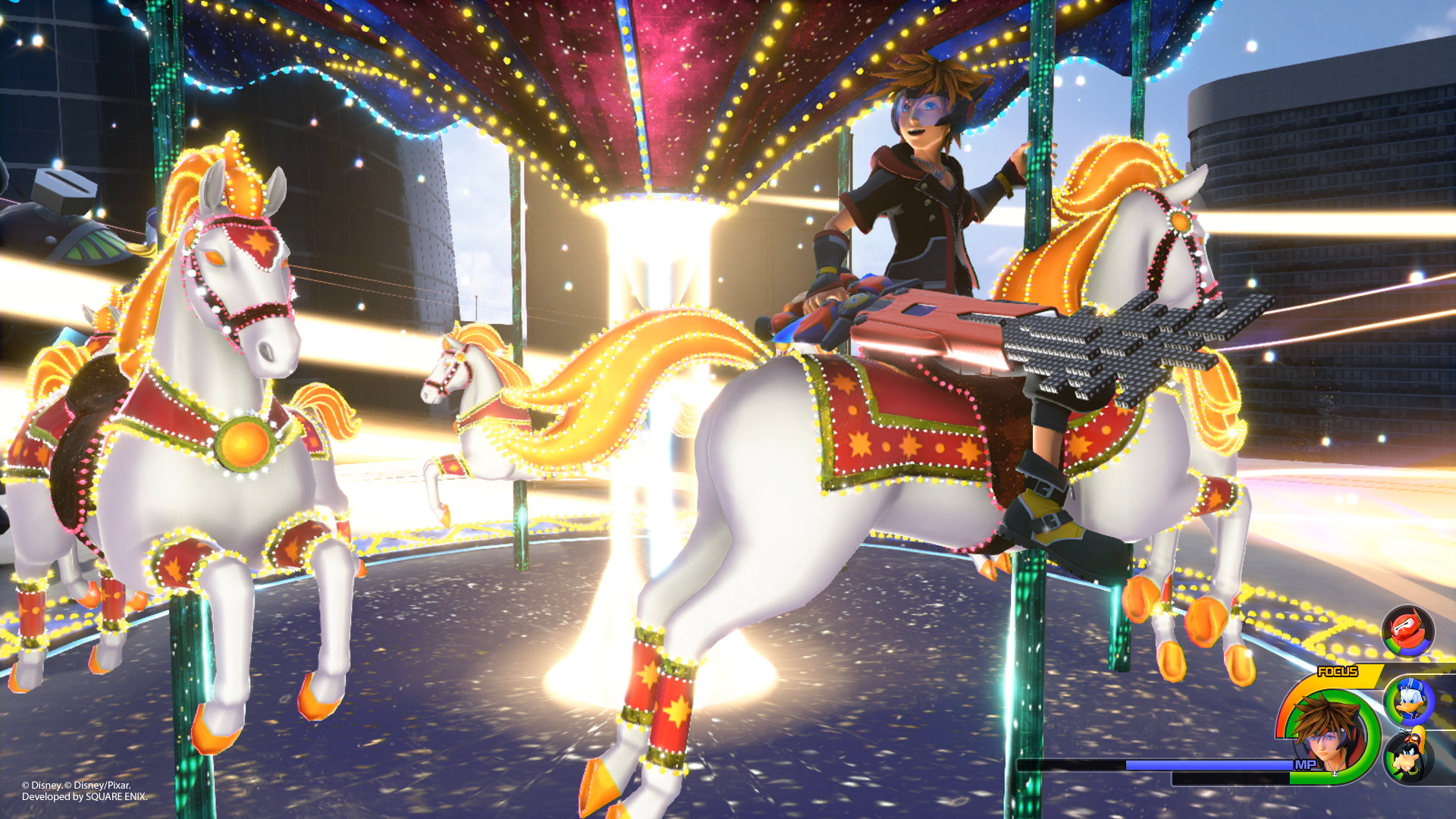 Here are some interviews with Visual Effects (VFX) Directors Yasuhiko Onishi and Shigeyuki Oono as well as Interface Director Naomi Sanada.  DISCLAIMER: This is only a tentative translation. It is possible that there are mistakes. These interviews could have potential spoilers, please be advised.

Previously worked on: KH2, KH Re:CoM, KH BbS FM, KH3D, KH 1.5+2.5, KH 2.8, FFXI, Brave Fencer Musashi 2: Blade Master, Parasite Eve 2Q: What did you watch out for when creating the effects?A: For the KH series, everything from the concept designs to the way expressions are made is rigidly decided. While adhering to this strict observation, we searched for a solution in the effects that stretched out to us from past works.Q: Please tell us something that was made possible due to the improvement of hardware.A: We were able to do things like make lots of particles come out at one time, or have light emit from effects themselves. Until now, having characters and effects come into contact with each other was impossible, and because it's so plain, I think it's hard to spot, but [an example of this is] in the scene where young Eraqus and Xehanort are playing the chess-like game; when the dust floating in the air hits their hands when they move the pieces, it changes direction.Q: Were there any unexpected designs you put in?A: When Eraqus and Xehanort are playing the chess-like game, the mysterious device in the foreground with the rotating rings surrounding it and the green effect is actually a wind-measuring anemometer. The place they are in, Scala ad Caelum, was called "the town of wind and towers" during the middle of development, so items that symbolized the town were put in.Q: Please tell us something you won't forget about the development process.A: I've been involved in this series a long time, so I thought I more or less had everything figured out, but this time around, I learned for the first time that the real Kingdom Hearts is not "blue", but "yellow".Q: What point in this production do you especially want us to see?A: When you use your Keyblade to "Attack", the combos and shotlocks you can use are very strong, but the effects change when you use magic or Keyblade transformations, so by all means, please use them.BONUS! "A secret about the game only you know"After the Keyblade War, the x-blade separated into 7 pure wills of light and 13 pure wills of darkness.

[NOTE: the kanji used here could also be "wish" or "purpose"] Whether it was coincidental or intentional, ever since KH1, the number of the small circular parts lining the edge of the stained glass in the Station of Awakening has always equalled 20 (7+13).

Previously worked on: KH1, KH2, FFX, FFXV, FF Crystal Chronicles, FF Type-0, Chocobo's Dungeon, Seiken Densetsu: Legend of ManaQ: To what degree were you conscious of the original movies?A: For the scenes that were reproductions [of the movies], of course [we were], and even for the scenes that weren't we used references quite a bit. We tried to make it feel as close to the originals as the production speed allowed for.Q: What kind of changes did you make for each world?A: We aimed for making The Caribbean photorealistic and Olympus to have more hand-drawn-type visuals, so in order to make the best expressions for those worlds, we took the textures or movement of particles into consideration.Q: Is there any effect you especially like?A: The presentation of the Darkubes that appear in San Fransokyo. When I first saw them, I was worried about whether they would be able to move properly within the game, but thanks to the abilities of the programmers, they came out very nicely.Q: Which point did you fuss over the most?A: Since the series has gone on for so long, each of the players has a different sort of image of what KH is. I thought that I didn't want to destroy that, so for each expression [I made] I tried to incorporate as many opinions as I could.Q: Which point was the biggest struggle?A: The work involved with making effects fit into the changing environments for the scenes with storms, blizzards or raging seas. There were times where we had to adjust effects for each separate cut, which was tough.Q: Please tell us something you won't forget about the development process.A: Every morning, there was a video conference that connected the Osaka and Tokyo studios. Within the conference, we of the Tokyo staff had the kind of essence of soft sensitivity that is unique to Kansai people (note: Kansai is the region of Japan that Osaka is in) pushed into us, so I think we were sort of able to develop a more flexible way of thinking.BONUS! "A secret about the game only you know"

The cutscene "Interval I-2: Radiant Garden"—"Terra's Whereabouts", where Xemnas is flying around and some lights are disappearing, was made consciously so that the timing [of the lights' disappearances] followed the order that the members of Organization XIII faded away.

Previously worked on: KH CoM, KH3D, KH 1.5+2.5, KH 2.8, The World Ends With You, The World Ends With You -Solo Remix-, FF All the Bravest, FF Record KeeperQ: What did you take into consideration when designing the menu screen for this game?A: As for things on the menu screen, I tried to incorporate a lot of icons. Because the system this time around has such a huge amount of components, the amount of words within the menu ended up being huge no matter what. The goal was to use icons to relieve the more complicated-seeming impression of there being only words, so that you could open the menu in a lighthearted kind of way.Q: In each world, the design for the command menu is different, but were there any ideas that ended up being rejected?A: Yes, many. For each world, the amount of ideas for the design of the command menu was at least three or four, and from those, the most appropriate ones were chosen for the game.Q: Which point did you fuss over the most?A: Of the Keyblades, there are some that have two-step transformations. When those transform to their second step, the logo design on the command menu was created to change beginning with the first transformation. The motion of the Keyblade transformations are cool, but I'd like you to look at the animation of the changing logo design [too].Q: Which point of this production do you want us to see?A: Not only the Keyblade transformations, but also Attraction Flow and Links have various animations for the command menu logo designs. I think you probably won't have much opportunity to see them in the middle of battle, but by all means, please check them out just once. Also, the graphic of Sora's face on the HP gauge also changes along with his form changes, so I think I'd like it if you looked and compared them.BONUS! "A secret about the game only you know"In this game, the graphics of the characters' faces on the HP gauge show the biggest amount of expressions out of any game in the series, but there was a problem with Mike's eye being so big that his expression was hard to see, so it troubled the facial team. However, adding in his arms and legs was a brilliant solution!