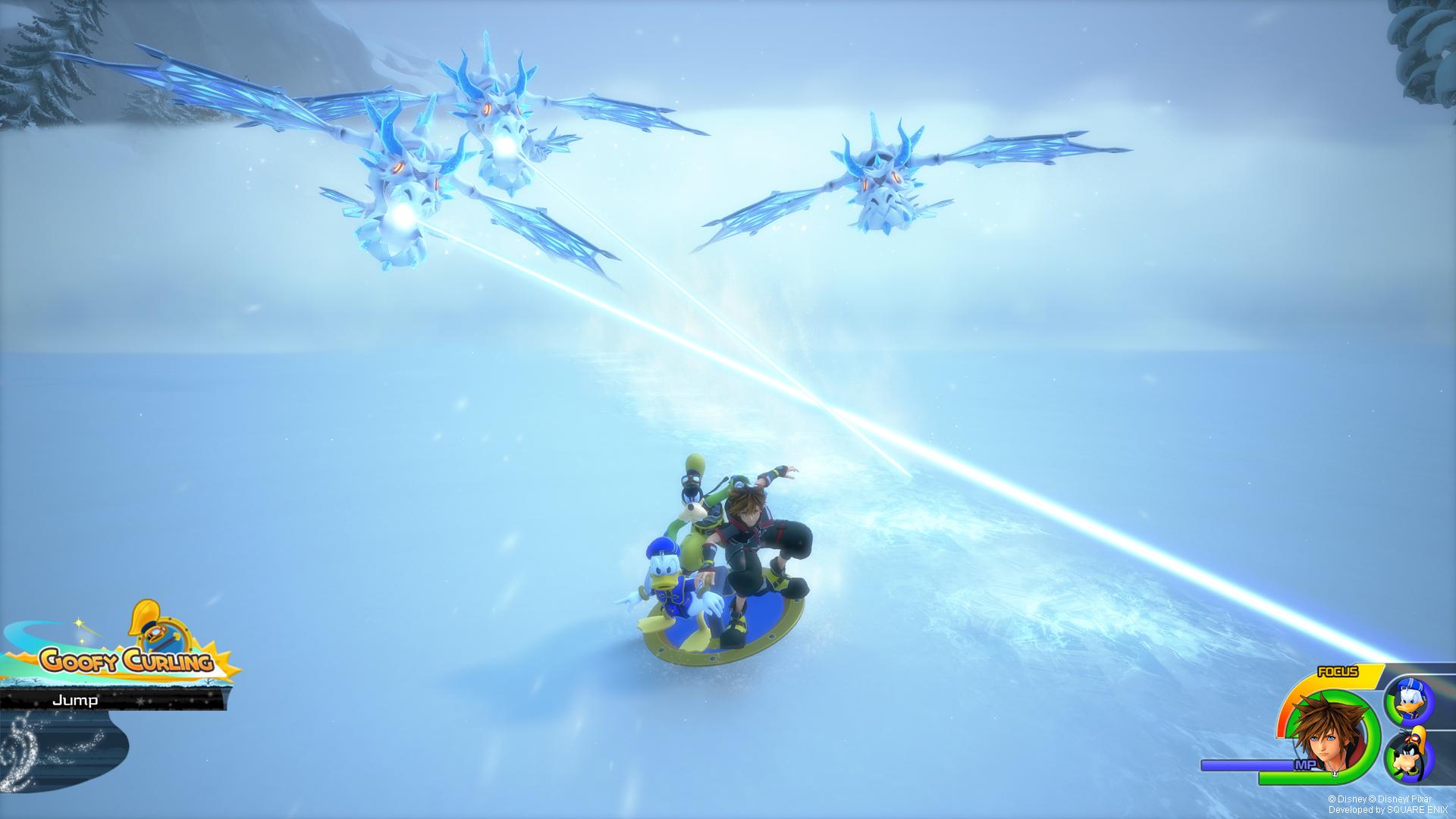 We have some interviews to share from the gameplay perspective from Michio Matsuura (In-Game Cinematic Director), Yoh Miyazaki (Map Director), and Kazuki Oono (Level Director). These interviews could have potential spoilers, please be advised.

Previously worked on: KH1, KH1FM, KH2, KH Re:CoM, KH BbS, KH BbS FM, KH 3D, KH1.5, KH2.5, KH 2.8Q: What kind of work were you responsible for?A: Deciding the staging and camera work for particular situations, such as when Sora uses an attack or when the Rock Titan appears in Olympus. This is different from cutscenes that move the story forward, which were called "Real-Time Staging" or "Real-Time Camera" by the development team. However, I was responsible for some of the staging in the last scenes of the final battle against Master Xehanort, which were more like story-driven scenes.Q: Which part of the work did you fuss over the most?A: The part in Arendelle where Sora, Donald and Goofy are riding the shield down the mountain to escape from enemies. For the scene where after flying off the cliff and gliding, the shield hits the ground and you start sliding again, making the placement of Sora and the others and the shield match up was extremely difficult, but in order to have the actions continue smoothly, I asked the staff responsible for motion to adjust them many times.Q: Please tell us the point you felt was the biggest struggle.A: There were a lot of bugs when we were making it so that you could cancel links or Attraction Flow while they were being used and switch to a different attack. We had to fix all of those bugs one at a time.Q: What kind of work would you like to try next?A: For this work as well, when producing special situations, I really wracked my brain so that the player's feelings wouldn't be interrupted, but because of the bugs there were times when I wasn't able to find a clear solution. Next time I'd also like to try things like changing the camera angles to feel fluid and less like they're being directed, and come up with some methods to advance the story without taking control away from the player.BONUS! "A secret about the game only you know"In Twilight Town, there are movies from "Classic Kingdom" being screened, and we partially developed one for "The Klondike Kid", too. However, since the place you obtain the game data is in a different world, it was never truly completed.

Previously worked on: KH Re:CoM, KH BbS, KH Re:coded, KH3D, KH 0.2Q: Is there any particular map you especially like?A: In the Central District of Sanfransokyo, there's a street with skyscrapers, a street with shared residences, a street with restaurants and such, so all of these aspects of a city are all jammed together and makes even just walking around in them fun, I think. Especially at night, the neon and billboards are glowing, so the atmosphere increases five times (the difficulty we had making it increased five times, too).Q: How did you position the Lucky Emblems?A: We wanted [the player] to go to various locations all over the map, so we set them with a focus on places that stood out, places you would want to go and stop by, or really suspicious places. If, in the middle of the story, you could take a break and take a look around your surroundings, it would make me really happy. By the way, since it's the 90th anniversary of Mickey Mouse's screen debut, that's why we made the number of Lucky Emblems 90.Q: Please tell us the part you fussed over the most.A: Galaxy Toys, in Toy Box. I think toy stores are familiar to most anyone, but when trying to make one now, misplacing the alignment of the shelves or the display of the merchandise even just a little would cause you to feel strangely, so I researched modern stores. By the way, the upper part of that giant capsule machine in the center of the hall, the one with the rails stretching upwards, was made to resemble a beam of light emitting from the UFO on the ceiling, so the idea was that when the capsules inside the machine decreased, it would be refilled by capsules rolling down from the UFO.Q: Which parts of this production do you especially want us to see?A: In Toy Box and Monstropolis, since most of the areas don't appear in the movies, they have a fresh design that the designers did well on. For example, in the factory in Monstropolis, the labels on the walkway depict monsters, or the buttons in the elevator are bigger or smaller to fit the sizes of different monsters, so I'd like everyone to check out all the nooks and crannies.BONUS! "A secret about the game only you know"There are a few hidden easter eggs around that are familiar from the Pixar movies, such as the Pizza Planet car. If I may say so myself, they are particularly hard to find. (note: likely things apart from the car since it's right there)

Previously worked on: KH CoM, KH 2.8, The World Ends With YouQ: Please tell us the concept for the various worlds.A: It was things like "a toy store where you could board robots" for Toy Box, or "a place where you can make use of the land, sea, and sky" for The Caribbean. Additionally, we placed great importance on thinking about how the content from the original movies or the locations in the worlds fit together.Q: Could you tell us the details about how the Flantastic Seven were born?A: The start was because there was a suggested plan to have special enemies. When we thought "how about putting the Mushroom XIII from KH2 in this time?", just as Organization XIII became Mushroom XIII, the point to notice is that the Seven Princesses became the Flantastic Seven [in the same way].Q: What point did you fuss over the most?A: The connection to the Disney characters. We shoved in elements like having them react to things on the map or giving you hints about ingredients or Lucky Emblems, and tried to give you the feeling that they are really together on your adventure with you.Q: What parts of this production do you especially want us to see?

A: The phantom Soras you collect in The Final World are moving in ways that suggest all of the different situations that Sora has encountered so far on his journey. I think it might be interesting to try and think about what each phantom is doing.

Q: Please tell us something you won't forget about the development process.A: During the last few months of the final stages of development, we were tasked with incorporating the Flantastic Seven, and regarding one plan in particular that I wasn't able to incorporate, I arranged with Yasue (note: Tai Yasue, the co-director) over e-mail while he was attending an event overseas. While I was somehow putting everything together, Yasue-san was saying things like "we're making more and more mini-games!" on stage at the Tokyo Game Show, so when I heard that at the venue I screamed internally "No no no no no, we're just barely scraping by with just this, you know?!" [laughs].BONUS! "A secret about the game only you know"When you're riding the Gigas in Toy Box, when you land on the ground from the air, for just a moment upon landing you won't be able to move, but if you use the booster just before landing, that won't happen and you can start moving again quickly.