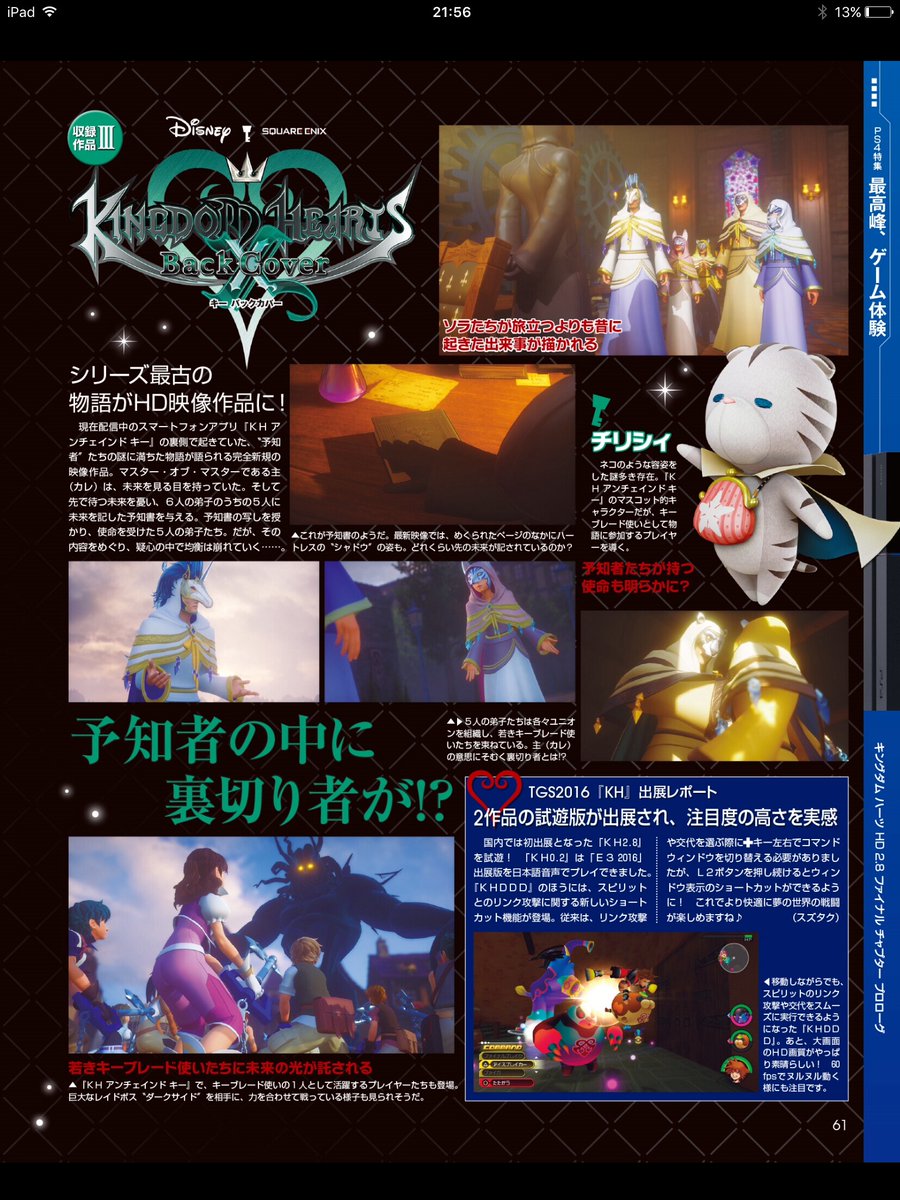 The September 2016 issue of Dengeki PlayStation features the upcoming Kingdom Hearts HD 2.8 Final Chapter Prologue over four pages. The feature shows the cover art for the game, as well as various stills from the TGS 2016 trailer released earlier this month. The article talks about the new TGS 2016 trailer and impressions on the demo that was available to play at TGS 2016.

You can view the feature scans below, courtesy of @RyougaSaotome.

Update: Translations have been provided courtesy of

Goldpanner. You can read them below.

The eagerly anticipated release date has been decided! The latest trailer, released at TGS 2016 also included new scenes from the three works included in this title!! Not too long now before the doors of adventure open for main characters Sora, Riku, Aqua and the others...

>Let's set out on an adventure that will lead to the truth!

As the first PS4 title in the Kingdom Hearts (hereon KH) series, and as a title that contains three episodes that connect to KHIII, this title is being eagerly anticipated all around the world. Today we have some of the latest information and a checklist of the must-see points of the three titles! We also have a report on the demo that was available at TGS 2016.

>This tale of the bonds of friendship depicted in HD quality

>Riku: A keyblade wielder who cares about Sora, and walks by his side. In order to pass the Mark of Mastery exam, he sets out on a journey to free the worlds trapped in sleep.

Sora: An energetic and bright boy who wields a Keyblade, which can open any lock. He has his sights on becoming a Keyblade Master with his best friend Riku.

KH3D [Dream Drop Distance], released in 2012, has been remastered in 60fps HD. The graphics are of course stronger, and the playable sections have also been tweaked to be easier to play. The story is set straight after KH coded, and depicts Sora and Riku as they challenge the Mark of Mastery exam in order to stand up to the coming darkness.

>The story leads to KHIII

>Borrow the power of Dream Eaters to challenge strong foes!

>Series-first official orchestral concert starts next March!! Extra performances in Tokyo and Osaka have been set!

Kicking off with a performance in Tokyo on March 10 2017, the series' first official orchestral concert will tour the world. In addition to the Tokyo performance that has already been announced, additional shows in Tokyo and Osaka have been decided on.

This is a brand-new episode set directly after the events of KH Birth by Sleep, which was released on the PSP in 2010. Created with the same game engine as KHIII, still awaiting completion, this world brought to life with beautiful visuals lets you get a feel of the future of the series. The plot follows the main character Aqua, who has been left all alone in the Realm of Darkness. In the latest trailer, released at TGS 2016, it came to light that she meets King Mickey there! Does that mean her journey is truly coming to an end!?

>Aqua: One of the protagonists, along with Terra and Ven, who played an active part in KH BBS. Quick and light on her feet, she is particularly skilled with magic attacks.

>At the end of the lonely battle, she sees...

>The oldest story in the series as a HD cinematic piece!

This is a completely new cinematic piece that tells the mystery-shrouded tale of the Foretellers, and what was happening behind the scenes of the now in-service smartphone app KH Unchained Key. The Master of Masters, known as Him, had eyes that saw the future. Saddened by the future waiting ahead, He gave five of His six disciples a tome of prophecy, in which he had recorded the future. The five disciples were permitted to make copies of the tom of prophecy, and were given orders. However, as its content goes around, things collapse into suspicion...

>Chirithy: A mysterious creature with the outward appearance of a cat. It is something like the mascot character of KH Unchained Key, and it guides the player who joins the story as a Keyblade Wielder.

>The orders given to the Foretellers brought to light?

>Depicting the events that happened long, long before Sora and friends set out on their adventures

>A traitor among the Foretellers!?

With two demos on display, we felt for ourselves the staggering attention to detail

This was the first time a KH 2.8 demo was on display in Japan! A display version of KH 0.2 with Japanese voicing was available to play at E3 2016. With KH DDD, a new shortcut function related to link attacks with Spirits made an appearance. In the original game, performing link attacks and switching involved swapping to the command window using the left and right directional buttons, but now with this shortcut, holding the L2 button displays the window! This will make battling in the dream worlds way more exciting! (--Suzutaku)