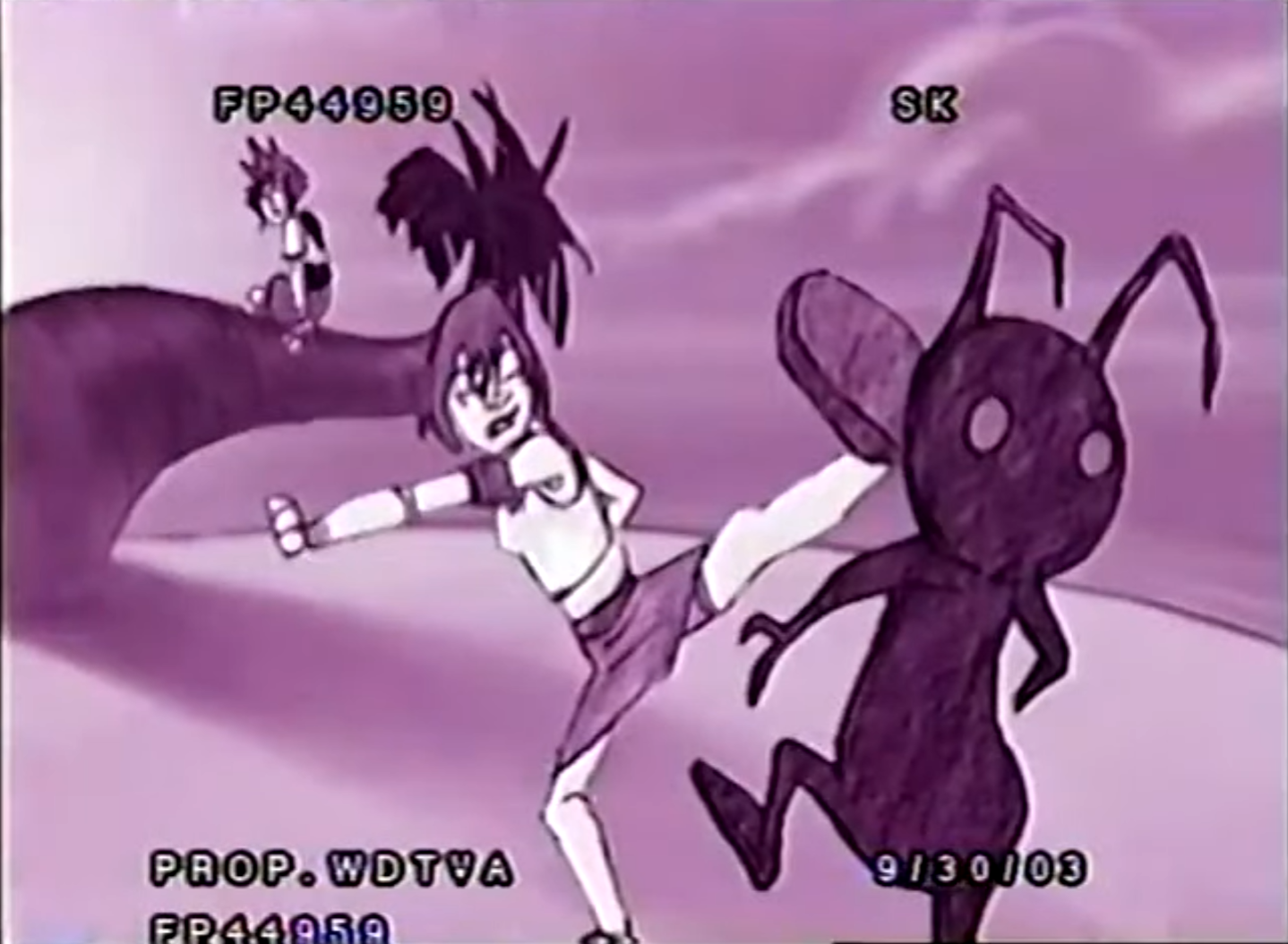 Following the director and producer of the scrapped 2003 Kingdom Hearts animated series, Seth Kearsley, sharing details regarding the canceled show, he has now uploaded its lost pilot animatic.

We have summarized the contents of this episode, viewable within the spoiler brackets below:

Jiminy then discusses how the Heartless arrived, throwing several worlds into disarray. Interestingly, he uses the term "Magic Kingdom" when referring to the worlds as a collective. Sora is alluded to here as the hero meant to combat the Heartless and save the wolds.

Like the game, Mickey leaves Donald and Goofy to seek out Sora while he faces the Heartless threat on his own.

Sora, Kairi, and Riku are then seen interacting on Destiny Islands, in the iconic spot housing the paopu fruit tree above the shack. Their conversation is fairly close to the first game's regarding other worlds. However, the Heartless then invade, far swifter than the source material. Soon after, Darkside appears, and Sora is flown up into the sky.

Sora then wakes up in the Gummi Ship, revealing that the sequence with Kairi and Riku was a dream of a memory he had. He glances at a photo of the three of them, refusing to believe he was the only one who escaped.

The scene then cuts to Riku in Hollow Bastion with Maleficent and Jafar. Jiminy also provides brief narration about Riku's circumstances. Maleficent remarks how she needs Agrabah's magic lamp in order to fully conquer it, with Jafar replying that the only way to do so requires finding a "diamond in the rough." After blasting Jafar out of the room, she orders Riku to find this supposed "diamond" and obtain the lamp. Of course, Riku asks if Maleficent will hold up her end of the bargain about finding Sora and Kairi and returning them all to Destiny Islands. She matter-of-factly accepts.

Sora, Donald, and Goofy approach Agrabah on the Gummi Ship as the lattermost member talks about the world having Heartless readings. Sora expresses reluctance about being a "hero" and saving worlds from the Heartless, simply calling himself a mere kid. However, Goofy cheers Sora, saying there's a hero inside everyone, and we all just have to find that part of ourselves. Plus, Mickey has faith in the Keyblade-wielding hero, so Donald and Goofy are inclined to believe their King. Sora feels better, and the three land in Agrabah.

The three start looking for Kairi and Riku while Sora warns them to keep low profiles, implying that they had difficulty doing so in the previous worlds they visited. Then, Bandit, Shadow, and Pot Spider Heartless appear as the group attempts to fend them off. Though, in the middle of their fight, Sora spots Riku also battling Heartless. The two happily reunite, with Riku saying how the Magic Lamp in Agrabah can be used to find the still-missing Kairi.

As the two friends unite and start fighting together, Donald and Goofy reach them. When Donald calls out to Sora, Riku is confused, unsure of what to make of the anthropomorphic animals. A Fat Bandit spawns next, and Sora ultimately defeats it with casts of Fire and Blizzard (Thunder or some type of wind spell are also used? Not sure).

Riku, Donald, and Goofy introduce themselves before Riku tells them of the Magic Lamp within the Cave of Wonders. At the Cave entrance, it speaks, unlike in the game. Sora qualifies as the "diamond in the rough," with the Cave of Wonders even stating that he's not quite who he expected.

Afterward, the group enters, and Riku approaches the lamp first. However, grabbing it somehow causes the passage to the "Realm to the Heartless" to open. Sora warns Riku to put the lamp down, but the latter's attitude becomes increasingly aggressive. Riku expresses frustration with his assumption about Sora being the one wanting to grab the lamp and how he isn't a hero, just a kid. He also mentions how the Heartless, which appear to be Shadows, Neoshadows, and a Darkside, are too strong for Sora to handle and that the Magic Lamp is the only way to resolve their conflicts.

Sora disagrees, proclaiming himself to be a hero. Fueled by newfound strength, he decimates several of the Heartless, bumping into Riku and grabbing the lamp. Riku's attitude seemingly reverts to how it was prior to holding the lamp, claiming that "everything went cold." He yearns for Sora to believe him, but then, a Darkside grabs Riku and pulls him into the "Realm of the Heartless."

Jiminy's narration returns as Sora places the lamp back in its original spot. Jiminy says that while Riku's intentions were good, his mind was shrouded in darkness and that it would stay that way for the time being.

Back at Hollow Bastion, Maleficent shows blatant disappointment with Riku's failure. It is worth noting that Riku and Jafar from earlier in this pilot refer to Maleficent as "queen." Maleficent then asks Riku if "he" (assumedly Sora) believes him. Riku responds with, "Yes, he has to."

The scene transitions to Sora, Donald, and Goofy back in the Gummi Ship as Jiminy shares pity for the boy losing his friend again despite winning the battle in Agrabah. Sora remarks how he didn't think that finally exploring worlds outside of Destiny Islands would be like this. Still, he has renewed ambition to stop the Heartless wherever they show up, as that's the only way he'll be able to save Riku and find Kairi. Goofy states how he and Donald are there for him, with Donald saying, "All for one, and one for all." Goofy conclusively says how it turns out they got themselves a hero after all.

Lastly, Jiminy closes out the episode, stating how there are many worlds left to save, and Sora will find strength in the hope of reuniting with Kairi and Riku.

UPDATE 10/14/2022: Seth Kearsley announced that he has taken down the animatic following a request by Disney.

You can view the full scrapped pilot via Seth Kearsley's YouTube channel below: