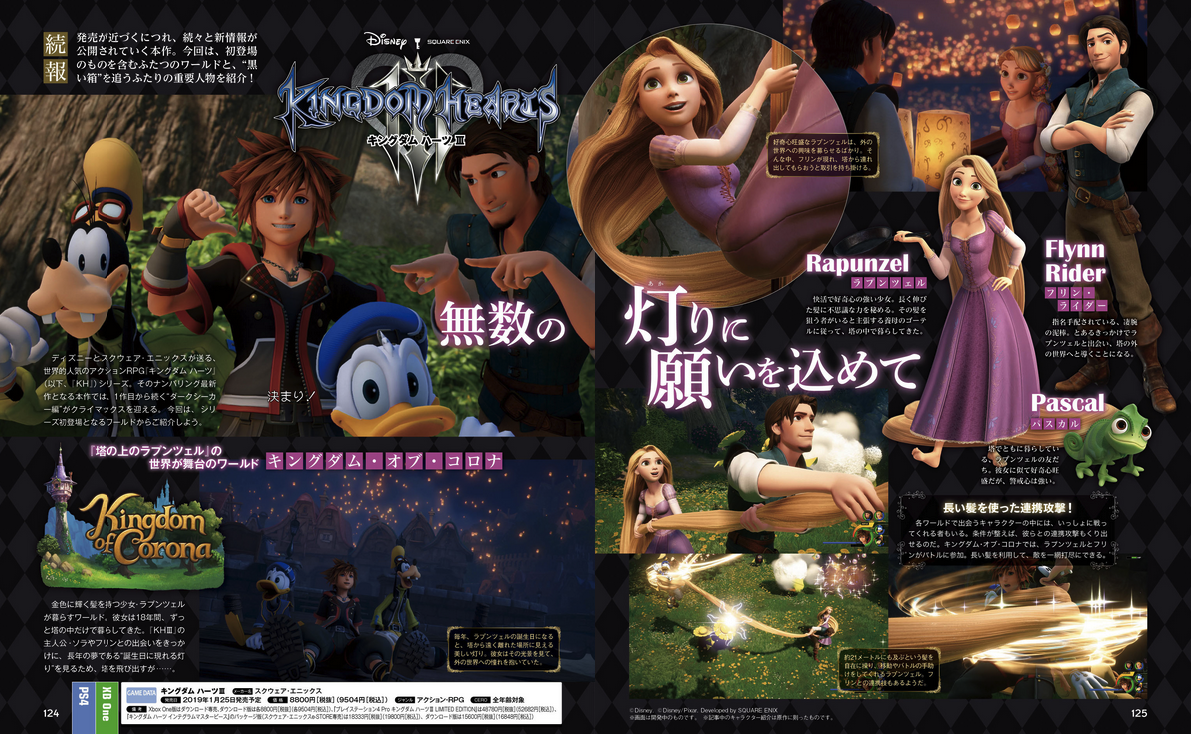 Kingdom Hearts III has been featured in Famitsu's 12/6 issue! The Famitsu layout below features The Hundred Acre Wood, a world that was announced in the X018 Kingdom Hearts III trailer, and Kingdom of Corona, which was shown in the Lucca 2018 trailer! The screenshots that are included in these layouts have been translated for you here! See the issue below!

You can read the full translations below thanks to KH13 staff Mio-chan, xionskeyblade, Solis and NihonScribe!

Follow-up Report: As the release comes closer, new information is being gradually revealed. This time, two worlds are showed, including the first appearance of two important people who are looking for a « Black box »!

Kingdom Hearts (KH series for short) is a worldwide famous action RPG, born from the collaboration between Disney and Square Enix. Becoming the latest numerated work in the series, the Dark Seeker saga will finally reached its climax.

Let’s introduce this time a brand new world to the series.

The world that takes place in the setting of « Tangled », Kingdom of Corona

A world where a long blonde-haired lady resides, Rapunzel. During those 18 years, she always lived inside a tower. After encountering KHIII’s main protagonist, Sora, and Flynn; she decides to finally climb down the tower to go see « the lights that appear each year for her birthday », but…

Each year, at Rapunzel’s birthday, beautiful lights can be seen afar, from the tower. At the sight of this scenery, she had longed to explore the outside world.

Rapunzel is a curious girl that is just interested in the outside world. Meanwhile, Flynn appears and makes a deal to take her out of the tower.

Rapunzel
A cheerful and curious girl. She has the mysterious power to extend her long hair. Her foster mother claims that someone is after her hair, and she has lived in a tower since then.

Flynn Rider
A fierce wanted thief. Since he is on the run, he ends up meeting Rapunzel and helps guide her through the world outside the tower.

Pascal
A friend of Rapunzel who lives with her in the tower. Like Rapunzel, Pascal is curious but weary.

Cooperative long hair attack!
In each world, characters come together to help fighting! When certain conditions are met, it will activate a cooperative attack. In Kingdom of Corona, Rapunzel and Flynn participate in battle by making long chain attacks to the enemy with Rapunzel’s long hair!

Rapunzel use up to 21 meters of her hair during battle. There is also a link technique with Flynn during Rapunzel’s attack.

Sora visits a world where Organization XIII are continuing to pursue their plans. In Kingdom of Corona, Marluxia, who has appeared in Kingdom Hearts: Chain of Memories, confronts Sora. He seems to be looking for Rapunzel.

Marluxia: “They are finally having their parent and child reunion, so be quiet and watch.”

Gothel, who identifies herself as Rapunzel’s mother, is against Sora. She follows Rapunzel who left the tower without her permission.

A twisted world due to the influence of Organization XIII
Organization XIII consists of 13 Seekers of Darkness with Master Xehanort as their leader - he will try to use the villains of each world to pursue their goals. In this world, Marluxia approaches Gothel, but what are his intentions?

| Dancing mini-game has appeared |
Kingdom of Corona has appeared frequently in the recent trailers that have been released. Rapunzel and Sora can be seen dancing in the trailer. Kingdom Hearts director, Tetsuya Nomura, explains in a past interview that we will be able to enjoy rhythm mini-games in Kingdom Hearts III.

Maximus
The Guard Captain’s horse who has a burning obsession with catching Flynn Rider. By following him, he meets Rapunzel then gets to know her.

The relationship between Flynn and Maximus isn’t very good or, in other words, they are enemies. There is an abundance of rich original character development and the expressions of each character grabs your attention.

What is in the Black Box!?
Maleficent and Pete appear to be looking for the “Black Box” that we mentioned earlier. It seems to be the same black box that has appeared in Kingdom Hearts χ and Kingdom Hearts: Back Cover (within the movie included in KH2.8). What will happen once the contents of the box are unveiled?

KH fans are eager to find out what's in the box and how this content will be used.

Maleficent
A KH series antagonist that Sora has faced many times, a powerful witch. During their last confrontation she transformed into a dragon.

Pete
He has been causing problems in multiple worlds. As Maleficent’s partner, he reads mayhem and provides a lot of obstacles for our heroes.

The One Hundred Acre Wood, a familiar place which showed up in every numbered KH title, appears in this instalment too! Sora was told by Merlin, a powerful wizard, that a strange phenomenon occurred on the cover of Pooh’s storybook. This is why Sora decides to visit him this time.

When we think about Pooh’s world, we think about mini games!
The Hundred Acre Wood is one of the classic worlds in the KH series. Even in this instalment, mini games are present and it’s the perfect place for relaxation.

Here is a mini game that requires to adjust the angle of a bullet and fire it to get rid of a block. Will the friends of this acre lend you their strength once you fill the gauge on the bottom right?

Familiar faces welcome Sora
In 100 Acre Woods, characters with a wide range of personalities appear. This world seems to have peaceful atmosphere without any trace of Organization XIII or the Disney villains. Sora receives strength even from those who never change.

Rabbit has been working on a garden just for Pooh, and it seems he wants Sora to help him out. The fruit-loving Lumpy is appearing in the series for the first time.

THE HAPPY FRIENDS THAT GATHER IN THE PEACEFUL FOREST

Sora will have blasters in each of his hands, or at other times have a launcher using both his hands. Shoot the enemies down with honey!

Rampage your way through with Honey Trenta!
Obtaining Keyblades based on the worlds you visited is one of the fun things to do in the KH series. The “Honey Trenta” Keyblade from 100 Acre Woods can transform into blasters. Some attacks will blast out honey!

| Switching Keyblades |
The battle system this time allows for Keyblade transformations, making each Keyblade more unique than before. In this game, you will be able to switch between three Keyblades at once. Press right or left on the d-pad to instantly switch out your Keyblade for a strategic, dynamic gameplay.