Recently, a Q&A was held on Twitter featuring the co-director of Kingdom Hearts III, Tai Yasue, where he answers 7 questions about the additions of Re Mind. Credits to @_KH_ENGLISH for fully translating all these questions!

Q1. What's new in the Version 1.07 (Free Update) You can get the Oathkeeper and Oblivion Keyblades. They have form changes:

Oathkeeper has Light Form and Oblivion has Dark Form, and there's dedicated combo action. We have also added 6 normal combo action abilities, fixed some of the cutscenes in the main game, and unlocked a lot of parts of the game that were previously locked from sharing.

Q2. Why did you focus on adding to photo mode (i.e. Data Greeting and Slideshow?)

The gameplay videos fans were uploading after release were really interesting and cool, and it moved us. So, we wanted to add something to the DLC that would get everyone even more fired up. In Data Greeting, you can select characters and then give them poses and add effects and such and take pictures. Then you can choose images and music to add to a Slideshow, and easily create your own personalized videos. After we made the feature, all the members of the development staff tested it with a photo competition. All the pictures were things you'd never see in the actual game, from heartwarming ones to ones that made us go, um, should this even be allowed? I really think everyone will have a lot of fun with it.

Q3. Tell us how to best enjoy the Premium Menu. Also, why did you add the Fastpass Code and the Black Code, which will make things harder for yourself?

The Premium Menu is a feature that lets you customize the game in various ways from the pause menu. Right after starting a new game, you can select either the Fastpass Code or the Black Code. The Fastpass Code includes settings like auto guard, and is aimed at people who want to move through the game quickly. The Black Code has settings like HP Slip (where your HP slowly decreases over time) and is aimed at people who want to enjoy a harder challenge. Both Codes have their own dedicated Achievements, and you can play with various settings as you aim to get Achievements. Some of them are curveballs - one of the Fastpass Code Achievements is to make it from Rapunzel's Tower to Corona while touching the ground as little as possible.

Q4. The members of the New Organization XIII appear as Limit Cut Bosses, but are they different from the ones in the main game? Who is the hardest boss?

They are completely different. We have changed their AI as well as their moves. They're all strong or fun in their own ways - you might need to be good at blocking, or attacking, or reading moves - which means different people will find different ones hard, but I think Xion and Master Xehanort are especially hard compared to the rest. They are so nerve-wracking and so satisfying to beat that your hands will still be shaking 15 minutes after you beat them.

We got testers and developers who had defeated past KINGDOM HEARTS secret bosses to do a survey, and received the opinion that it was indeed hard enough to make them cry. It has a particularly high number of attack patterns - this secret boss will take time to develop a strategy against. But, just like with the New Organization XIII members, there is a way to strategize against the character's movements - it's not impossibly hard, and in fact if you play perfectly you can win without taking a single hit.

Q6. What else has been added in Re Mind?

Re Mind is an additional scenario that complements the end of the main story and allows you to have fun with new co-ordinated action while playing as Kairi, Roxas, Riku and Aqua. You can swap between English and Japanese voices, and the "w/ Orchestral Concert Ver." edition has a mode that lets you enjoy recordings of the Kingdom Hearts orchestra.

Q7. Lastly, a message for the fans.

This DLC expands on everything - battle, story, gameplay - allowing you to enjoy KH3 on an even deeper level. For those who are looking forward to the story and playing as the new characters there's Re Mind, for those who like being creative there is Data Greeting and Slideshow, for those who want challenging battle there is the New Organization XIII Limit Cut, for those who want to experience gorgeous music and visuals there is the Orchestra recordings (※w/ Orchestral Concert Ver." edition only) - we have prepared a wide range of content to suit all sorts of tastes, so please play it and see! 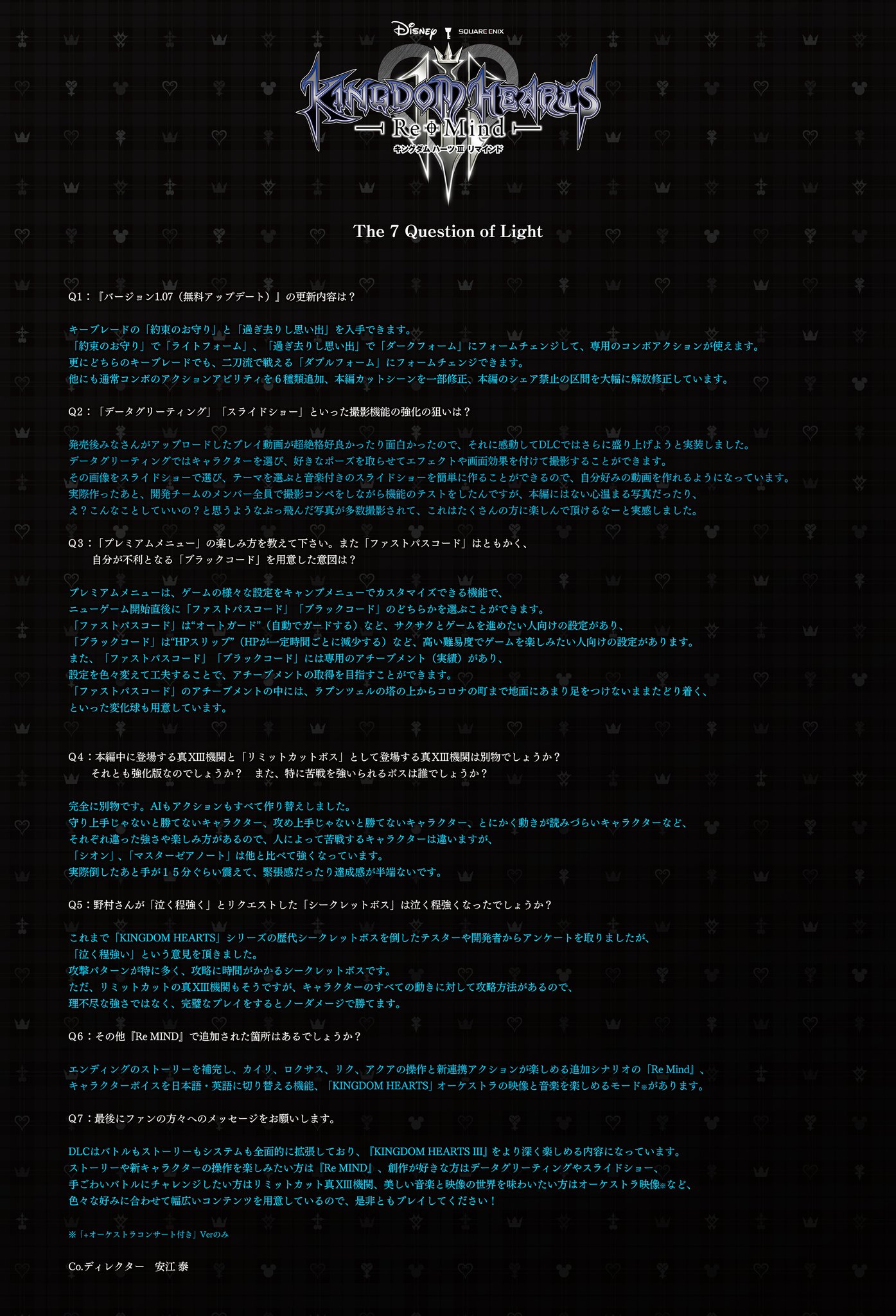