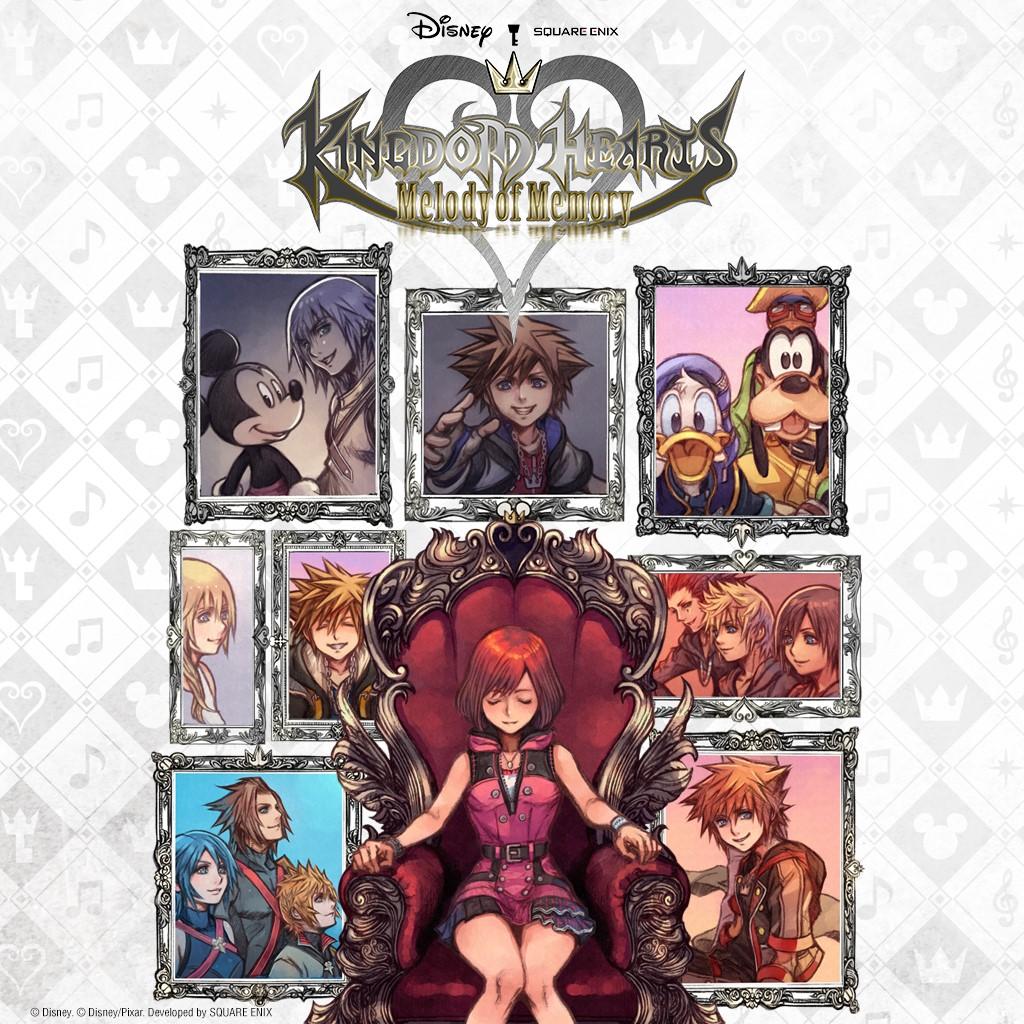 *Note this is a spoiler free review. Please mask any new story heavy plot points you wish to discuss inside a spoiler box, in accordance with our site spoiler policy. 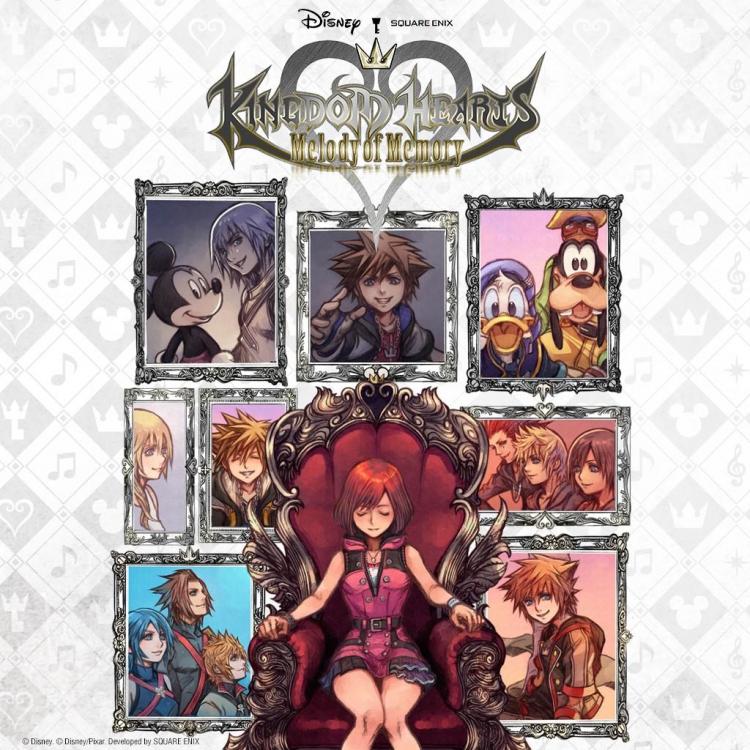 The concept of KINGDOM HEARTS Melody of Memory is to reflect on the series thus far through memories, as I believe music and memories are closely tied together. Looking back on various moments in the games, I’m sure you’ll find that they are tied to the music. I think you can say that this is also true in real life. The reason we took the series to the musical genre has to do with fate – the fact that this rhythm-action project kicked off at a time when I felt it would be good to create an album-like title that essentially serves as a recap for the series, as we had just closed a chapter in the series with KINGDOM HEARTS III.

The meat of this game is without a doubt, the rhythmic action gameplay. The demo gave us all a taste test of how this gameplay system would generally work and at least personally speaking, it made my hype for the full release go full throttle. Needless to say, I became easily addicted once I got my hands on the full release. 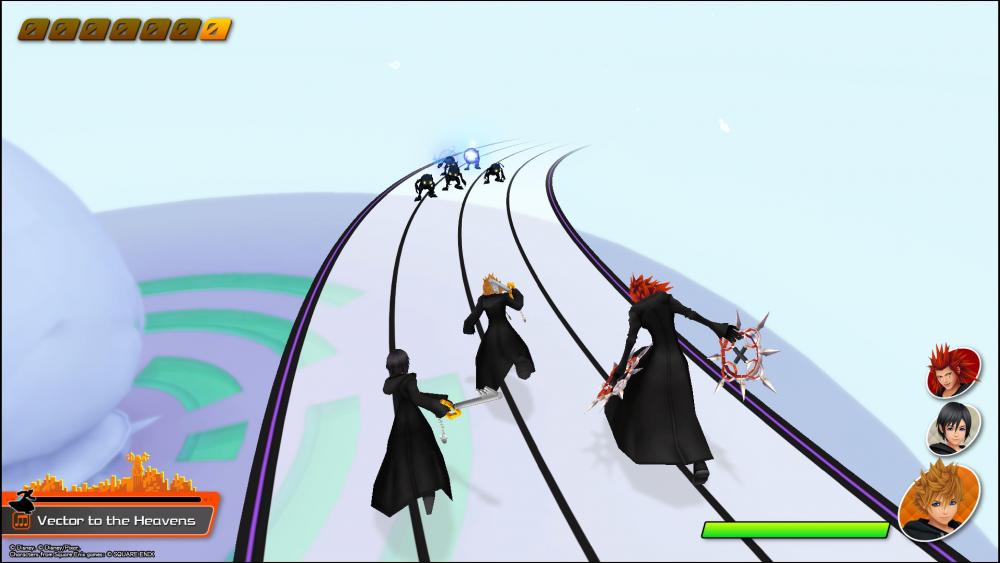 There are three types of songs you can play; Field Battles, Boss Battles and Memory Dives. Of these three song types, Field Battles are easily the most frequent, and they're certainly the ones I had the most fun with. They consist of the player's chosen team automatically running down lanes fraught with enemies and other obstacles. Players must time either singular, or multiple X, L1 or R1 button presses in time with the markers that appear. These markers obviously follow the beat of the song so if you know the song well, there's a likely chance you'll be able to pick up on the foundation of the rate that you should be pushing buttons at. Clearing songs and missions in the World Tour mode rewards players with items and various kinds of collectibles as well.

In a way, Kingdom Hearts Melody of Memory is the most fun and satisfied I have had when playing a rhythm game. While this genre is always centered around perfection, Melody of Memory takes a unique approach and does not simply depict button icons during the songs. (at least for Field Battles) You instead have to coincide your button presses with enemies on screen and while they do have markers, the lack of guided button prompts makes success feel all the more cathartic.

Boss Battles and Memory Dives are more akin to standard rhythm game titles. You simply have to time appropriate button presses with incoming icons. The Boss Battles are my largest critique in regards to gameplay. Their mechanics offer an enjoyable and unique challenge, however, there are only a handful of boss fights sprinkled throughout the game and there are some that really felt like they should have been included. It was in no way a deal breaker, but this was one of the concepts I would have found to be more fulfilling with further refining. With there being such an astronomically low number of them, the boss battles certainly stood out, but it also made me disappointed with how few of them there were. There are also stats the party members have which increase once they level up. These are oddly implemented since they really only impact your damage intake and health, but it does help players with learning songs on higher difficulties.

Memory Dives are the stages I'm the most indifferent on. While not as numerous as the Field Battle songs, there are a fair bit more than the boss battle tracks. They felt like the most lax of the three stage types. They were a convenient method to wind down after dealing with some particularly challenging Field Battle tracks.

Synthesis is a massive part of this game's content. From the synthesis menu you can craft new songs, (Memory Dives) new collectibles, other synthesis materials, and items. Performing synthesis also increases the catalog of what the shopkeeper Moogle offers, so there is an addicting, continuous cycle of effort and reward. The amount of what you can make is a tad overwhelming admittedly, but it made the overall gameplay loop increasingly more satisfying. 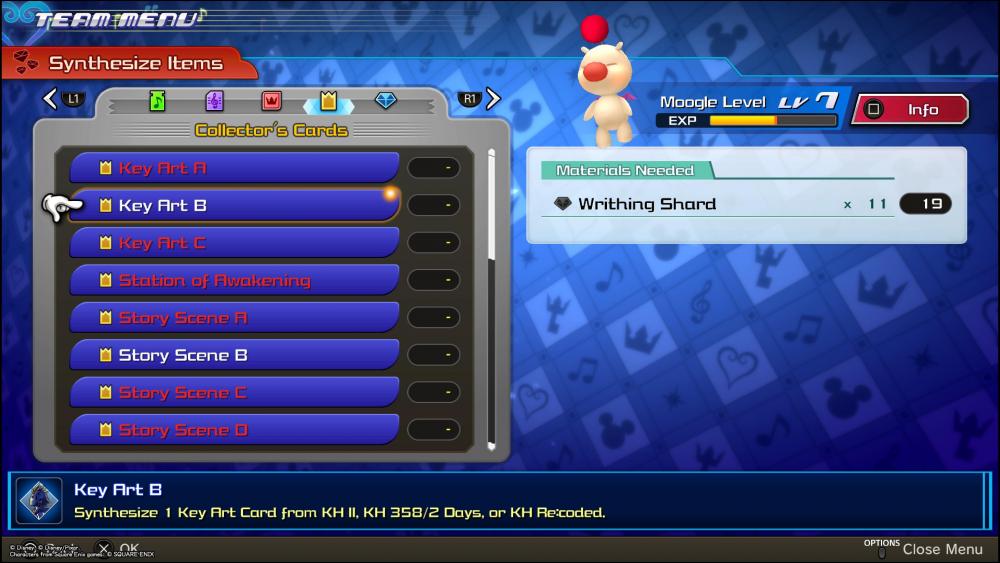 The core concept underlining the THEATRHYTHM series—reminiscing about past gameplay experiences through countless wonderful songs—is something we wanted to maintain when developing KINGDOM HEARTS Melody of Memory. Just like the THEATRHYTHM series cherishes and strives to do so, we ensured details that spark a sense of nostalgia—things that people who truly love KH will appreciate—are sprinkled across every corner of the game.

The museum is another massive part of this title's content. Containing a magnificent amount of art and other collectibles makes it an engaging way to spend some time. You can also check on your gameplay records as a nice reflection point. Admiring past entries of the franchise and your own gameplay history are these menus' sole purposes and they depict it all remarkably well. 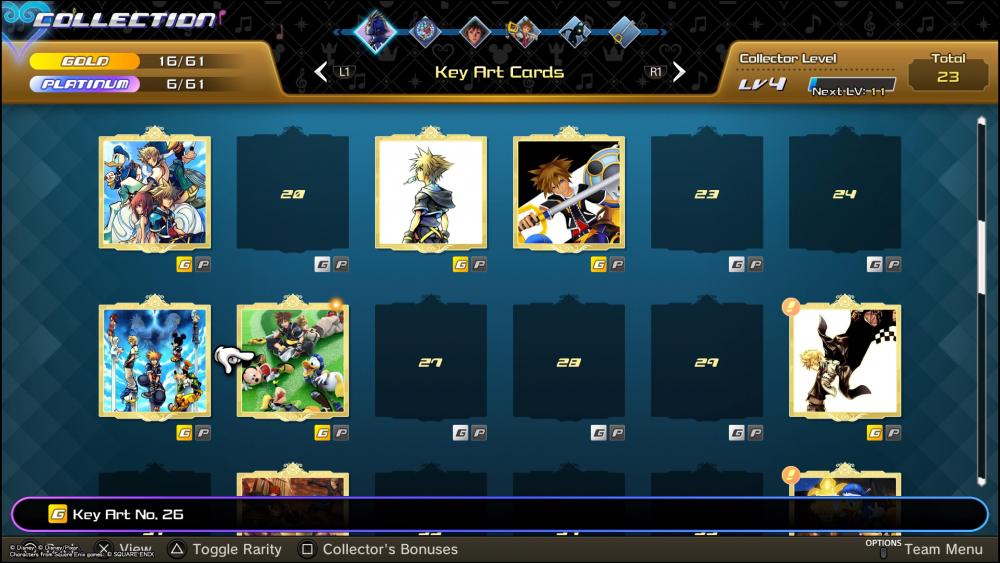 Moving on from the gameplay, there are two elephants in the room regarding this title's release, the first of which being the story. Now, story has not been a heavily marketed aspect of this game, and not many were expecting much from it in that department. However, this without a doubt feels like the briefest inclusion of story for the series on consoles. Don't get me wrong, I thoroughly enjoyed most of the new story content but the issue I have with it all is the implementation. There is a mere 20 or so minutes of new cutscenes which even for a entry not centered around story, feels incredibly needless. The new story content felt as if it would better fit the confines of the Re Mind DLC rather than being backloaded to a new game's ending. It also doesn't help that the gameplay and new story just don't synergize well enough, so while I found myself invested and engaged in the new story content as a whole, it almost felt like I was consuming a completely different product than from what I was just playing.

All that said though, the new story content may rub some fans the wrong way for certain reasons, but it ultimately does a fairly enticing job of directly setting up what the future of the series has in store, in a much more conclusive way than what the Re Mind DLC did. Some notable aspects of this new story content have to do with Kairi and the voice acting. The tale of Kairi not being done justice is a tale as old as time so I won't bother getting into that now, but this new story content does end up respecting her as a character far more than the past. While still far from ideal, she has some more agency in what ends up happening to her, which is a step in the right direction. She also had a fair bit of personality for some of the story scenes.

Speaking of personality, a small gripe I had with this title was the narration, or recap, of the prior games. Clearing certain songs and worlds will award players with very brief recaps of the prior games in the franchise from Kairi's perspective. Unfortunately, I found these recap scenes to just barely skirt being serviceable. Due to their brevity, I don't think these scenes would be enough to entice prospective fans or inform them enough on what has happened in the prior entries. Kairi also has no personality in these recaps either. She is merely the narrator, but at the same time, the lack of any uniqueness from Kairi's point of view for these scenes makes them feel very dry, dull and barebones. This is not a massive detractor by any stretch of the imagination since these scenes do technically accomplish what they set out to do in a sense, and they are rather infrequent and brief, but the way they were handled still did rub me the wrong way. All in all, the best way to describe the narration is that it does its job as acting as a very lite recap, but it does not go into enough detail into the past games for it to act as a serviceable conduit, and it also lacks any notable uniqueness from Kairi as a narrator which makes me question its overall point. 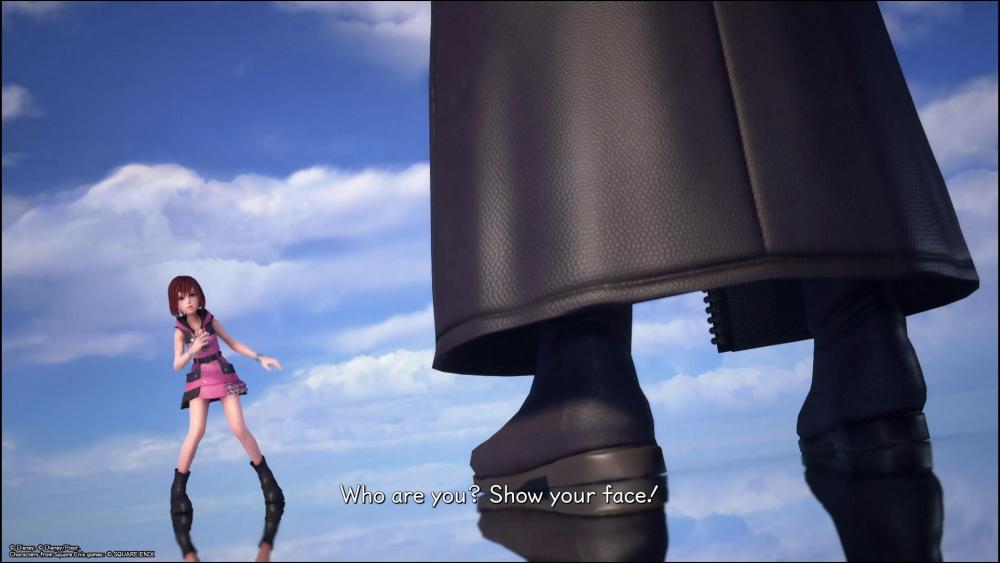 The second elephant in the room has to do with the game's price tag and overall length. First and foremost, it is rather obvious at this point that this game is really aimed towards either rhythm game fans, or Kingdom Hearts fans who are in love with the soundtrack. This is not a title for those who expected a decent chunk of story, and if that is what a potential buyer desires, they are better off skipping this title entirely or purchasing it on sale. However, if you are a fan of rhythm games or are easily enthused by the wondrous Kingdom Hearts soundtracks, then this game is definitely worth the full price tag. Compared to most rhythm games, Kingdom Hearts Melody of Memory offers a jaw dropping amount of content. Including over 140 songs as well as tons of collectibles to the degree that it has is well beyond what most games of the genre do. The inclusions of synthesis, online versus mode on top of that, as well as co-op, makes Melody of Memory an incredibly stellar experience for those hooked to its gameplay. I am personally hoping for more songs to be added as DLC at some point down the road. There are still a decent chunk of songs that are not included such as the data battle tracks in Kingdom Hearts 3 Re Mind's Limit Cut Episode. Regardless of whether or not that happens though, I am very satisfied with the impressive slew of songs we got in one package.

Overall, most of the critiques I have with Kingdom Hearts Melody of Memory are minor and are not in any way major aspects of the game. At its core, this title is an absolute delight and I see myself sinking dozens upon dozens of more hours into it as we await the next entry in the franchise, and beyond. The cathartic nature of perfecting songs, the inclusion of 3 gameplay modes and 3 difficulties makes the replay value sky high. For rhythm game connoisseurs and those merely interested, there is more than enough to keep you hooked. 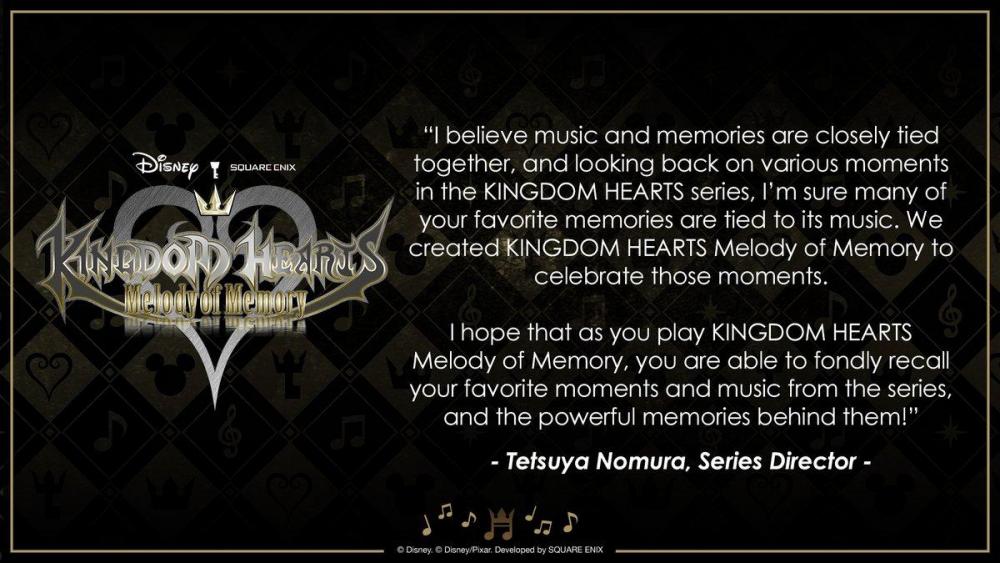