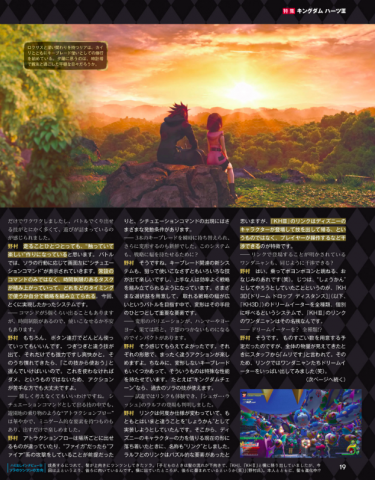 The latest Famitsu issue that released on June 21, 2018 featured an interview with the director and creator of the Kingdom Hearts saga, Tetsuya Nomura. Nomura also talked about additions to the combat system as well as his thought process behind various Keyblade transformations and character links! This portion of the interview is now fully translated thanks to our member NihonScribe and @Keytotruth, which you can check out below:

Golden Text Block: Lea, who has a strong connection with Roxas, starts training how to use the Keyblade with Kairi. Does he think of passing peaceful days with his best friend at the clock tower as he views the sunset?

Nomura: I think it's becoming pretty fun even just running around. In battle, depending on the actions Sora takes, something called Situational Commands will appear on the left side of the screen. But they don't just stay there, they all have a time limit and they pile up, so it's up to the player to choose at what timing and what order to use them in to create a strategy. This is a system that I really wanted to implement this time.

——There are around 5 commands one can use, however, there is a time limit in which case if you don’t use it or unable to use it, it creates a dangerous situation.

Nomura: Of course, with the fast button prompts, you can quickly use it. Once one gets used to the different accessible skills, you can choose thinking, “from here let’s use this skill,” which is good. Even if you're bad at doing the actions, you will be fine whether you choose to use the skill or not.

——So there's no need to think of the hard way to do it. Among the situation commands there are amusement park-like things you can ride through “Attraction Flow” that are gorgeous, and with the mini-games also implemented there are a lot of fun things to explore.

Nomura: Attraction flow changes depending on the place, and with abilities like “Firaga,” becoming “Firera,” you become more efficient and various situation commands become more available.

——Players are now able to carry three keyblades, moreover they can retain their transformations. Was this done also with the thought of choice in mind?

Nomura: Yes. Besides just making a new personal system for the keyblade, we wanted people to enjoy playing even when they didn't want to use a keyblade while giving accomplished players more ways to stand up to the challenge and increase their effectiveness. We prepared for various options when backed into a tight situation weighed with the management of the different forms.

——With the strength of transformations such as the hammer and yo-yo forms, there is a definite impact if these forms don't stick.

Nomura: I'm glad you feel like this. With each form, players can definitely enjoy doing different actions. Incidentally, there are a few that don't have a transformation and utilize a special power. For example, Sora’s “Kingdom Key,” which allows him to use abilities he learned in past installments.

——There are also Links such as the new reveal of Ralph from “Wreck it Ralph” that have been showcased.

Nomura: The Link was originally going to be different, and our name for the ability kept changing as the forms changed. We chose “Link” for when the player form changes with the powers borrowed from a Disney character. Though it was puzzling thinking of links along with Ralph, the point is that [KHIII]’s links reveal Disney characters and new skills that one doesn't just play but can also watch.

——Is this the same case for the other link revealed, Meow Wow?

Nomura: Yes. You fight as you watch Sora travel with him, bouncing throughout the frame. Something similar to that (laughs). Really, we wanted to try a “summon” with KH3D’s [Dream Drop Distance] (also known as KH3D) dream eaters of all types, with all the names in the system, Meow Wow remained.

——Utilizing all the types of Dream Eaters?

Nomura: Yes. I intended to add a lot, but when the staff saw all the things I wanted to include, they said it was “impossible.” With that, I tried to see if I could fill up the Meow Wow link with as many dream eaters as I could.

[at the bottom of the page]

Along with Sora's growth, his hair has been becoming more spiky. "When he was a child his hair was facing more downwards and although in KHI and KHII it became more spiky, this time, the spikiness goes more towards the back of the head. It's kinda like it's going more towards the sides. (laughs)" stated Nomura. Is Sora’s hair also evolving alongside his abilities?

What do you think of the new gameplay mechanics and strategy involved in Kingdom Hearts III's combat? Let us know in the comments below!