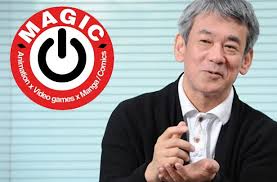 KHIsland, in conjunction with FFDream, Finaland, Gamergen, and Gamersflag, have conducted an interview with Kingdom Hearts series executive producer Shinji Hashimoto at MAGIC 2017. During the interview, Hashimoto talked about topics such as the relationship between Disney, whether Marvel Entertainment could have an impact on Kingdom Hearts III, the possibility of adding multiplayer mode in the upcoming game, and communication with fans.

Below you can read extracts of the interview related to Kingdom Hearts. The full interview can be read here in French.

Translations have been provided by KH13 staff member Mio–chan.

― Will the partnership between Square Enix and Marvel Entertainment have an impact on Kingdom Hearts 3? Will we find bits of the Marvel Universe in it, just like the Disney worlds that already exist in the previous titles of the series?

Hashimoto: It’s not on the agenda for the moment. However, we may consider it in the future.

― Would it be possible to add a multiplayer mode in Kingdom Hearts 3?

Hashimoto: You should ask this question to Mr. Nomura, he will be most likely to answer this.

― Why is this so difficult to communicate and give concrete and precise information on Final Fantasy VII Remake and Kingdom Hearts 3 to the fans?

― Recently, you organized a special event to celebrate Final Fantasy’s 30th Anniversary in Japan. Can we hope for a similar event in France?

Hashimoto: Outside Japan, we have two agencies: one in the USA in Los Angeles, and another one in the UK in London, who are in charge to plan and promote these kind of events. Moreover, we already gave concerts pretty much everywhere in the world on the occasion of the 15th Anniversary of Kingdom Hearts: The Kingdom Hearts Orchestra - World Tour -. It is just an example, but our British and American teams are considering organizing similar events.

― Can you tell us about the relationship you have with Disney for the development of Kingdom Hearts 3? Do they have a great influence, can they force you to do certain things or on the contrary block some ideas?

Hashimoto: First of all, Disney has its own policy and own rules for the management of its movies, video games, and merchandise, etc. We try and at the same time must respect them as far as possible. Otherwise, they give us free reign most of the time. They allow us to create anything we want and Disney generally accepts our ideas, to the extent that it appeals to the fans who support us in our approaches and our ideas.

― You have produced a lot of Western licenses in recent years: Hitman, Deus Ex, and Tomb Raider etc. Are western licenses as important as Final Fantasy and Kingdom Hearts, or do they only allow Square Enix developed games to last?

Hashimoto: For Mr. Matsuda (CEO of Square Enix), we must constantly renew and create new games and new licenses. Concerning Final Fantasy, we also seek to innovate while remaining in the spirit of the series. The President is always trying to give us new challenges.

― Following the reveal of The Avengers Project by Crystal Dynamics, can we hope to see future games based on the Marvel Cinematic Universe, but this time developed by the Japanese teams?

Hashimoto: This partnership is similar to the one we already have with Disney for Kingdom Hearts. Firstly, it is necessary to successfully launch and implement the new licence. If the latter is a success, then perhaps we will follow on. We will wait and see what it is going to do before we do anything else.

― You stated that you listen a lot to the fans’ opinions, what are your sources and how do you use those opinions?

Hashimoto: Nowadays, it is easy to establish a direct contact with the fans thanks to the social media and we can almost answer instantly to many critics. It is also much easier to fix what is wrong in a game via updates. Critics are important and we try to take them into account to satisfy as many people as we can.

Monaco Anime Game International Conferences (MAGIC) recently took place on February 18, 2017. It was during this event that Kingdom Hearts series director Tetsuya Nomura showed off a screenshot of Sora in his Power Form battling a Heartless in the city of Thebes in Olympus Coliseum. Nomura was also interviewed at the event by FFDream and Famitsu.

What do you think about Shinji Hashimoto’s answers regarding Kingdom Hearts III? Let us know in the comments below!