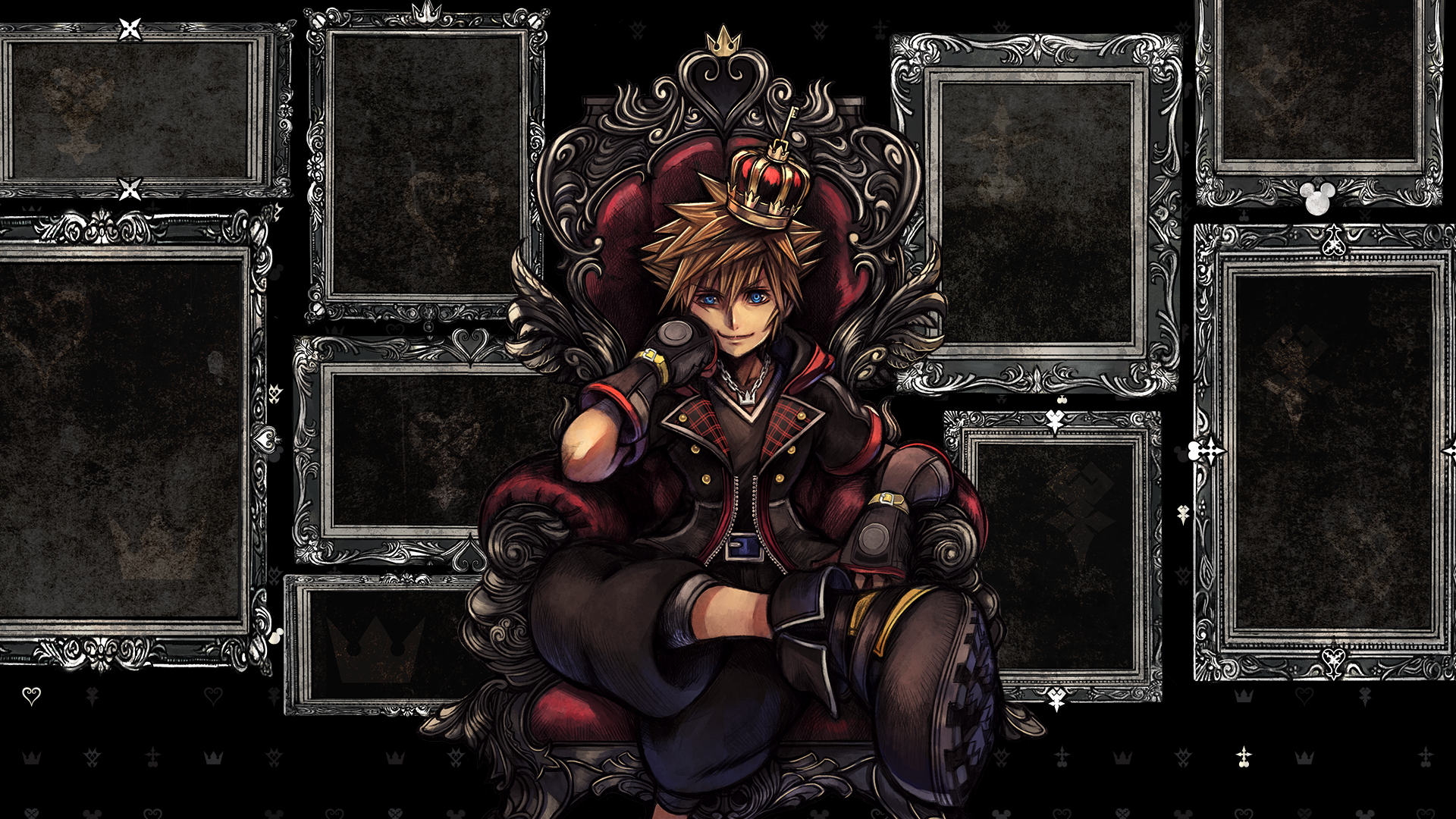 Previously, two Q&As were released on the Japanese Twitter of Square Enix, dubbed the 7 Questions of Light and 13 Questions of Darkness. We already covered them with translations previously, which you can view here and here. Today, Square Enix released an official translation of the two Q&As! The Keyblades “Oathkeeper” and “Oblivion” can be obtained.

Q2: What was the goal of strengthening photo functions such as the “Data Greeting” and “Slideshow” features?

After the game was released, the gameplay videos uploaded by everyone looked incredibly cool and fun. We found them so moving that we implemented these functions in the DLC in hopes of adding even more to the hype.

In the Data Greeting feature, you can select a character, pose them any way you like, and add effects or screen effects before photographing them. Selecting those photos in the Slideshow feature and selecting a theme allows you to easily create a slideshow with music, so you’ll be able to create a video that’s customized to your own taste.

In fact, after we created them, all the dev team members had a photo contest while testing functionality. There, we saw many photographs not in the main game that were heartwarming or were so crazy that they made us think, “Huh? You’re allowed to do that?”, and it hit us that this was something that many people would enjoy.

Q3: Please tell us about how to enjoy the “Premium Menu.” Additionally, “EZ Codes” aside, what was the intention behind preparing “PRO Codes,” which put yourself at a disadvantage?

The Premium Menu is a function that allows you to customize various game settings in the Camp Menu, and you can select either “EZ Codes” or “PRO Codes” immediately after you start a new game.

“EZ Codes” are settings geared towards people who want to move right along in the game and includes things like “Auto-Guard” (automatic guard). “PRO Codes” include settings for people who want to enjoy the game at a high difficulty level and includes things like “HP Slip” (HP decreases at regular intervals of time). Additionally, “EZ Codes” and “PRO Codes” have specific achievements, and by changing settings to make new adjustments, you can aim toward obtaining these achievements.

Among the “EZ Code” achievements, we’ve prepared some curve balls like one where you must get all the way from the top of Rapunzel’s tower to the Kingdom of Corona without setting foot on the ground very much.

They are completely different. We created everything anew, including AI and action.

In fact, after beating them, my hands kept shaking for about fifteen minutes – the nervousness and feeling of accomplishment are insane.

We took a survey of developers and testers who had beat the past secret bosses in the KINGDOM HEARTS series thus far, and we received feedback that it is “so strong that it makes you cry.” Its number of attack patterns is particularly high – it’s a secret boss that takes time to figure out how to get past.

However, as was the case for The Real Organization XIII in the Limitcut, there is a way to get past all of the character’s movements, so its strength isn’t unreasonable, and you can win without sustaining any damage if you have a perfect playthrough.

Q6: Are there any other parts that were added in Re Mind?

Q7: Finally, please send a message out to all the fans.

The DLC has been expanded in all its facets, including battles, story, and system. Its contents are made to allow an even deeper enjoyment of KINGDOM HEARTS III.

The 13 Questions of Darkness with Director Tetsuya Nomura Q1: What is the difference between Re Mind and FINAL MIX, which had been released for the previous mainline KINGDOM HEART titles?

The FINAL MIX versions were released in order to adjust the overall game balance, as well as add new content to the base games. On the other hand, Re Mind is comprised of content that is somewhat separate from the base game and designed to be enjoyed after completing it.

That said, FINAL MIX staple add-ons such as the option for English VO in the Japanese version and limit cut bosses will be included in Re Mind, so it can be considered as not so different from a FINAL MIX, with the one exception that no major tweaks have been made to the main game.

Q2: What is the threshold in separating the content for the free version update and Re Mind (the premium DLC)?

As I mentioned before, we will be including some elements that would have previously been made available in a separate FINAL MIX package, as part of Re Mind. However, some of the content that would usually go in a FINAL MIX edition, such as new Keyblades and extra abilities, have been provided in the free update, as something to aim for when completing the main story.

Q3: Is there not a possibility of a KINGDOM HEARTS III FINAL MIX release in the future? Additionally, might there be a physical version release?

There are no specific plans at the moment. We may take that into consideration if new platforms enter the market, but we haven’t given thought as to whether it would be released under the FINAL MIX name even if it gets to that.

Q4: Where does the additional storyline of Re Mind fall on the story timeline, and what will we get to see in it?

It jumps around the timeline in places, but the main series of events for Sora depicts what took place in the unrevealed time between the final battle of KINGDOM HEARTS III and the ending when Kairi was rescued. The player will have a more all-encompassing view of events than Sora himself does, so in Re Mind Sora gets to follow the story from a detached and overarching perspective, unlike in the main game.

It is a bit tricky to explain, but KINGDOM HEARTS III is a complete, self-contained story in its own right and the link through to the ending of Re Mind is only made possible because of the ending the main game has.

Q5: Are there any impact or changes to the original storyline of KINGDOM HEARTS III?

There are no changes to the original storyline of KINGDOM HEARTS III, and no impact on the player either, as they will start playing through Re Mind after they complete the base game.

That said, there are several areas where I have made some amendments, because I had abandoned a certain visual approach for various reasons, but really wanted to make the scene as it was originally intended, and these will be implemented with the ver. 1.07 update. Some specific examples of these would be such things as illustrating when a character incurs damage during a cut scene or some of the skyscape vistas.

We decided not to include them in the base game since there is no need to visit the Radiant Garden from a storyline perspective. There were also some development related issues. In Re Mind, we felt that we needed to have FINAL FANTASY characters appear from a storyline perspective and decided to give them roles, albeit minor ones, in response to the passionate desire from the fans. We want players to feel that the FINAL FANTASY characters are part of the KINGDOM HEARTS III lore.

Q7: What is the highlight of the Limit Cut bosses? Which character would you want players to keep an eye out for?

I had already decided that the Limit Cut boss lineup would be comprised of the members of Real Organization XIII, but as the development progressed, I started to feel conflicted as whether to keep Xion as one of the bosses or not.

However, by the time I mentioned my intentions of possibly removing Xion to Mr. Yasue, she was already in development. With this background in mind, I’d like the players to experience their own inner turmoil when they take on Xion. She’s quite a tough boss to beat!

Q8: You initially mentioned adding in the equivalent of another world into the game, but there seems to have been a change in direction?”

There was actually a new world we wanted to add, that we worked on planning and designing, but I personally could not square the logic of cutting out just that world and adding it on later. I felt that it would ultimately be better to have it as a candidate for inclusion from the start in the next game. For Re Mind, I decided to go with adding in multiple new elements, which add up to a volume of new content that is actually greater than a single new world would be. Creating this many bosses was particularly hard work!

Q9: Can you share some details regarding the Secret Boss and Episode?

I put my ideas of how the Secret Boss and Episode will lead the way for the next installment into it, although it is probably not possible to work out what that will be from the details that have already been released, even though it might just look like you can. Additionally, some of the battle construction itself was quite different to what I ordered. I was surprised, and so decided to go down this route this time around.

Q10: The dialogue from the beginning of the first KINGDOM HEARTS game is in the Final Trailer. Can you tell us about this?

It was a piece of dialogue that I wanted to revisit and address if the opportunity to do so ever came around. It probably doesn’t make any sense, but at the time, the world of KINGDOM HEARTS was approved as a result of including that line. The mystery doesn’t fully unravel with this, but I feel it brings us to the gateway.

Q11: Are you planning further updates and DLCs in the future?

There are no expected updates planned as of now, but if something arises in the future, I believe we would work to address it. As far as DLC for KINGDOM HEARTS III goes, Re Mind will be the first and last. We have already moved on to the next project.

Q12: Would you be able to share, if any, plans for the future of the KINGDOM HEARTS series?

We will need some more time to make another traditional, main-series style KINGDOM HEARTS game, but there was a surprising announcement from the KINGDOM HEARTS Union χ[Cross] team last week. On top of that, we also have two new teams working on different projects separate from Re Mind and Union χ[Cross], and one of those games is coming out earlier than you would think. The title screen for Re Mind lays some of the groundwork for it.

Q13: Finally, is there anything you’d like to say to the fans?

After work on KINGDOM HEARTS III finished, several things happened and there was some internal restructuring, so I am very sorry to have kept everyone waiting longer than initially expected.

In Re Mind we have been proactive in adding in new elements that give players enjoyment from playing around and exercising their creativity. It is easy to be drawn to the story, but most of the time spent developing this expansion was actually focused on adding the new battles and mechanics changes.

We hope players really enjoy these kinds of merciless challenges that you can only really do as DLC. We also greatly expanded the sharing features of KINGDOM HEARTS III, unlocking pretty much everything. Yasue has been saying that he wants to see everyone’s secret battle videos, so we have opened that up as far as we can too. See if you can take these fearsome foes down!