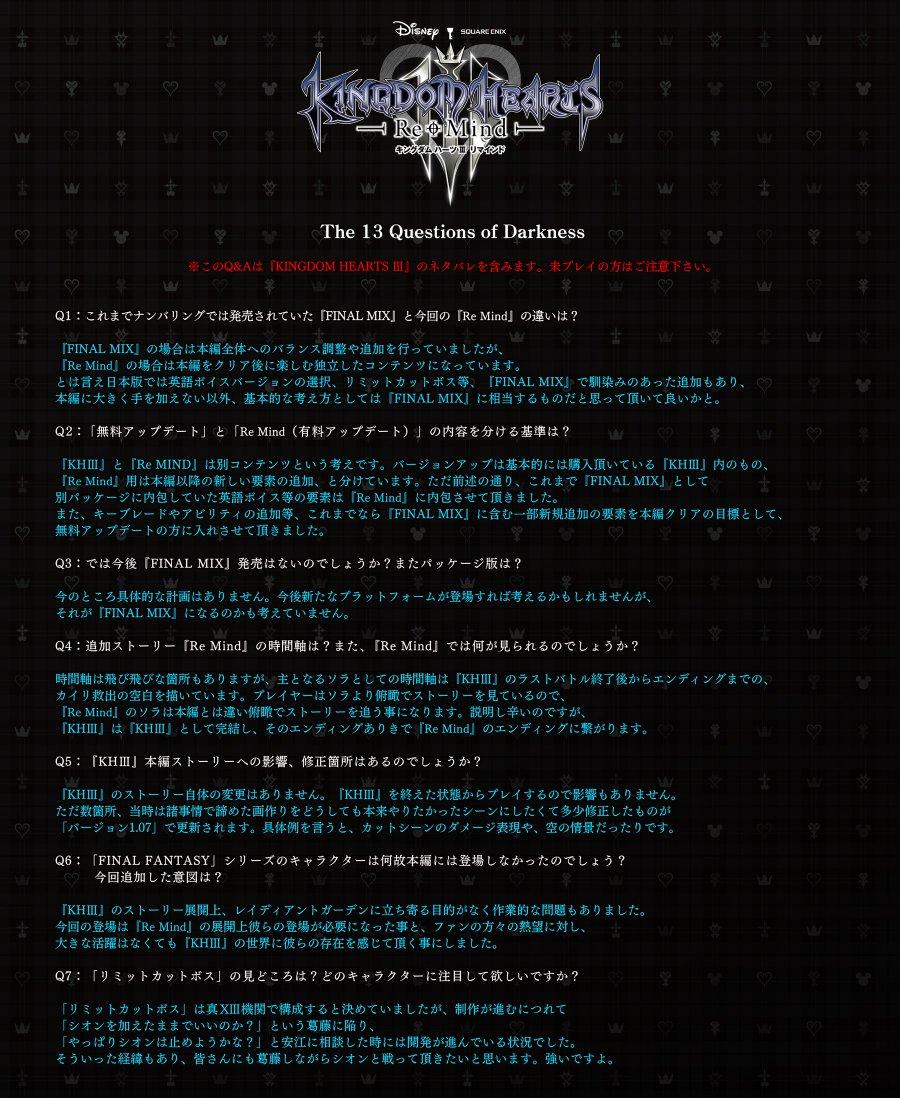 The 13 Darknesses edition of the "7 Lights and 13 Darknesses Q&A", a series of questions and answers related to ReMind, answered by Kingdom Hearts III director Testuya Nomura and co-director Tai Yasue was posted. We covered the content of the 7 Lights portion of the Q&A prior. Translations for this interview have been concluded. Credit to @_KH_ENGLISH on Twitter for the translations!

WARNING: The interview contains spoilers for Kingdom Hearts III. Reader discretion is advised if you haven't cleared the game yet.

Q1. How does Re Mind differ from the Final Mixes released for previous numbered titles?

We released Final Mixes to adjust the balance of and add things to the entire game. Re Mind is independent content you can enjoy after beating the main game. That said, we did also add English voices to the Japanese version, limit cut bosses, and other things you'll find familiar from Final Mixes. So, other than the fact that the main game hasn't been changed much, you can basically think of this as the equivalent of a Final Mix.

KH3 and Re Mind are to be thought of as separate content. It is split up like this: the version update is basically for what you bought as KH3, and Re Mind is for new features outside the main game. But, as I just said, the English voices and other features that would previously have been included in a separate package as a Final Mix have been included in Re Mind. But then I also included some new content that would usually have been in a Final Mix, like Keyblades and new abilities, in the free update - with the aim of giving you something for after finishing the game.

Q3. So there won't be a KH3 Final Mix? What about a physical release of this?

There are no concrete plans right now. We might think about something when a new console releases, but I'm not thinking about whether that something will be a Final Mix.

Q4. When is the new story in Re Mind set? And what can we expect to see in it?

Chronologically it jumps around a bit, but most of your time as Sora is set between the end of the last battle and the final cutscene, depicting the blank space of Kairi's rescue. As a player, you view the story from a higher vantage point than Sora - and in Re Mind, Sora is following the story from a different vantage point to the main game. It's hard to explain, but KH3 concludes with itself, and its ending connects to the ending of Re Mind.

Q5. Does it influence or rework anything in the main KH3 game?

The story of KH3 itself hasn't changed. You play it after finishing KH3, so it doesn't influence anything. But, we did update a few places in version 1.07 - things we gave up on at the time due to various circumstances that we wanted to make do justice to our original vision. To give concrete examples, it's stuff like damage-taking expressions in cutscene and the way the sky looks in the background.

Q6. Why didn't any Final Fantasy characters appear in the main game this time? Why did you add them back in?

The story developments of KH3 didn't provide a reason to stop by Radiant Garden, plus work related issues. They appear in Re Mind because story developments make them needed, and because of the passionate wishes of you fans. So, even though they don't have a big role, they now have a sense of presence in the world of KH3.

Q7. What are the highlights of the limit cut bosses? Who do you want us to pay attention to in particular?

We had decided to use the New Organization XIII for the limit cut bosses, but as the project progressed we began to feel conflicted over whether or not to leave Xion in there. Development was already underway when I went to discuss it with Yasue, like, maybe we really should cut her? Knowing this, I hope you feel just as conflicted as you fight her. She's super strong.

Q8. Early on you said you wanted to add the equivalent of one world - did that change?

Actually, we did start designing and planning a new world, but the reasoning why just this world would be added in after being separate didn't sit well with me. In the end I decided that it would be better to work it in properly from the start next time there's a chance. All the new content added with Re Mind put together makes more than one world's worth of content. In particular, it was a lot of work making this many bosses.

Q9. What can you say about the secret boss & episode?

The secrets contain my thoughts about the future of the series, but with the information out at present I don't think you'll be able to guess any of it. Some parts of the battle ended up very different from what I requested. But it surprised me in a good way, so take it as it is.

Q10. Why did lines from KH1 appear in the final trailer?

Those were lines I'd long wanted to put together if I ever got the chance. You may not understand, but the inclusion of those lines is what got the world of Kingdom Hearts approved. There is no mystery to solve this time, they stand at the doorway.

Q11. Are there any plans for further updates or DLC?

There are no plans for a hypothetical update as of now, but if issues come up we will deal with it. Re Mind is to be the first and only DLC. We are already working on the next title. The title screen of Re Mind serves as a piece of foundation for it.

Q12. Will you tell us about any plans for future KH projects?

We still need some time with regards to main line Kingdom Hearts, but first up the KH UX team will have a surprising announcement tomorrow. Aside from the KH3 and KH UX teams, we actually have two new teams in operation, and from them one title will be coming surprisingly soon.

We had some organizational changes after finishing KH3, and I'm very sorry this took so much longer than expected. The elements added in Re Mind are ideas we came up with that we thought you would enjoy. My attention always ends up turning to the plot no matter what, but most of our development time was spent working on new battle and gameplay elements. I hope you enjoy the merciless battles only possible via DLC. Also, we have unlocked nearly the entire game for sharing via the KH3 share function. Yasue said he really wanted to see everyone trying the secret battle, so we unlocked as much as possible. Please first try beating these formidable opponents. In just a few more hours, at midnight on the 23rd (JST), Re Mind will be playable. Thank you for all your support. 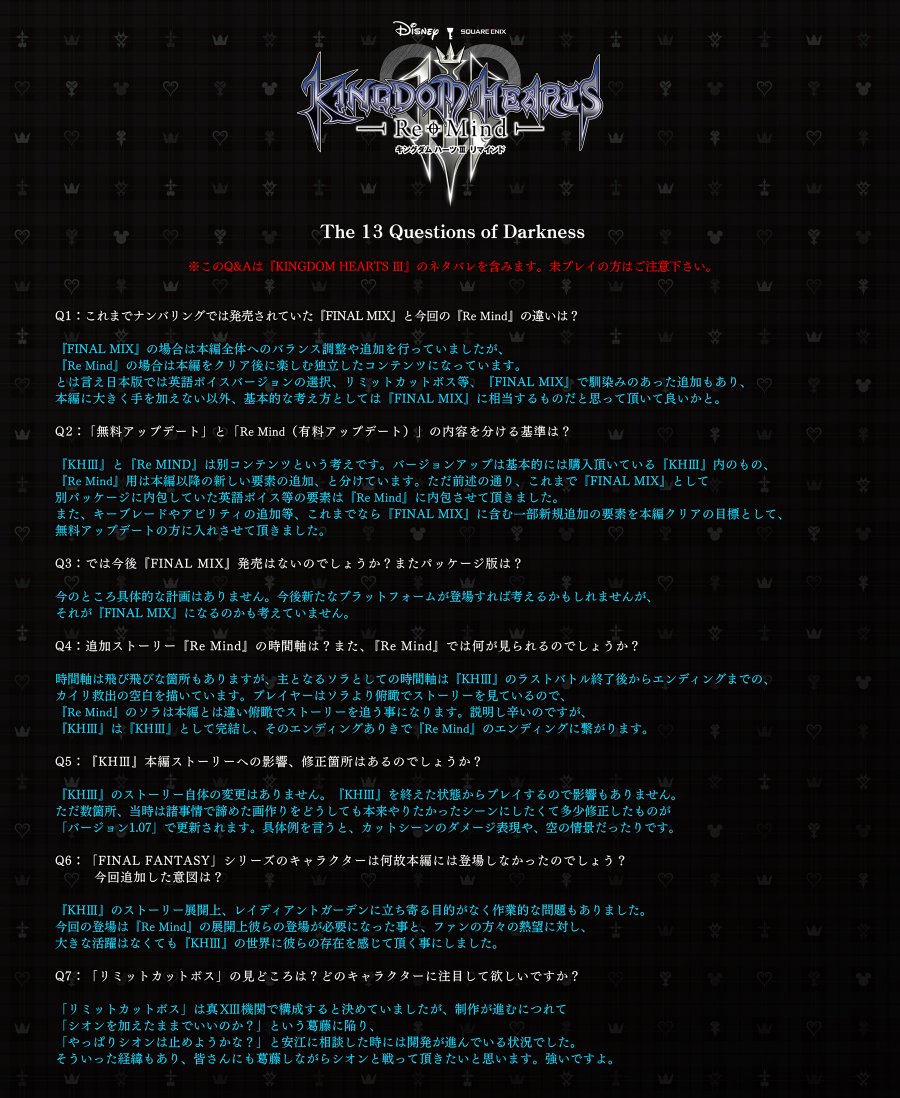 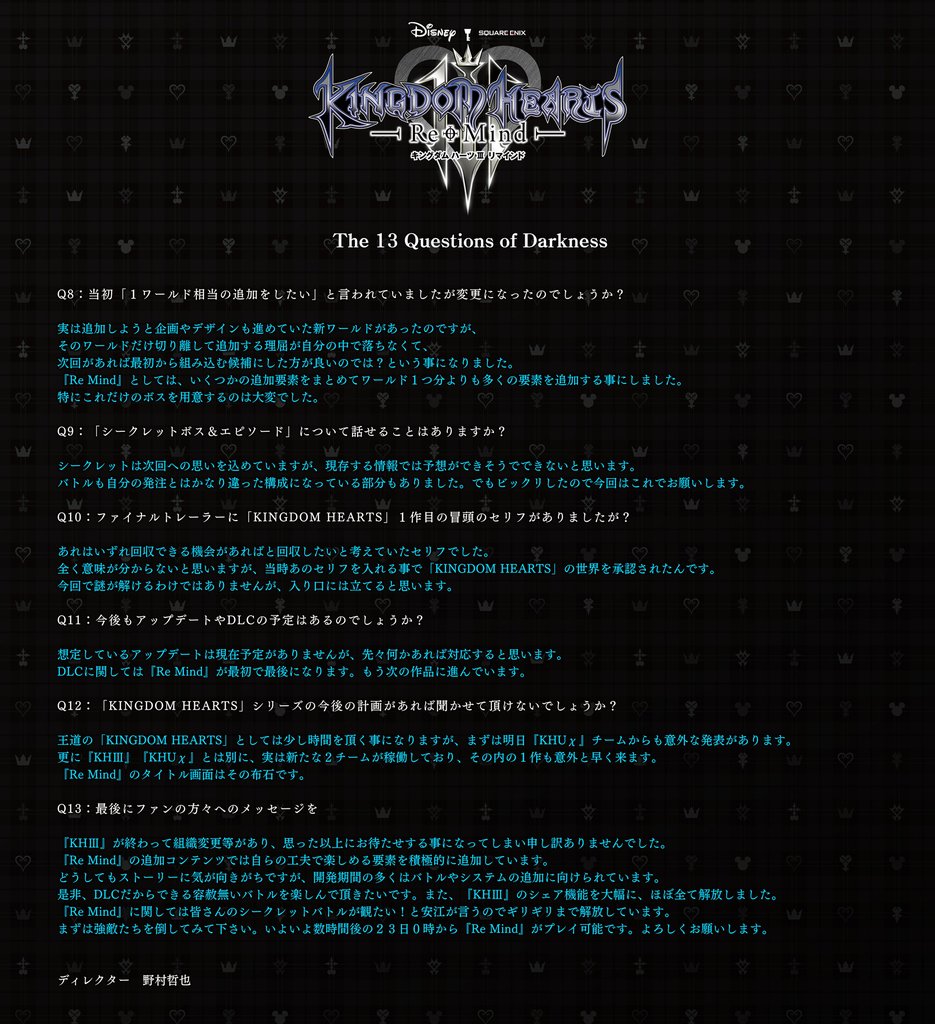