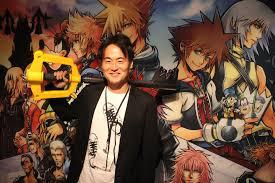 Here is the interview with Kingdom Hearts Co-Director Tai Yasue. Find out more about Keyblade transformations, the relationship between Square Enix, Disney, and Pixar, connections with Kingdom Hearts III and Kingdom Hearts Union x [Cross], and more, including a new way to experience the Attraction Flow rides. DISCLAIMER: This is only a tentative translation. It is possible that there are mistakes. These interviews could have potential spoilers, please be advised.

A: The proposed plan was, since we wanted make that particular scene in the Keyblade Graveyard thoroughly exciting, "to borrow the power of the players from KH Union Cross and, while wielding a great number of Keyblades, rush the Demon Tower". Also, since it's a huge compilation of situation commands, which is one of the great pillars of KH3, we wanted to put in so many commands that they surpassed the limits of the system. But, when the people in charge decided the means and direction and created it for real, it so greatly surpassed my expectations and excitement that I was surprised. Since we put such an extravagant scene in before the last world, I and the battle director were really troubled over how to deal with the finishing scene of Master Xehanort, the last boss. In the end, the concept in regards to Master Xehanort was made with a very different contrast, so I'd like you to enjoy that difference.

Q: What point of this production do you most want us to see?A: Your eyes have a tendency to go towards the Keyblade transformations or Attraction Flow, as they are quite impressive elements, but there are also a lot of small details that were really closely paid attention to included as well. For example, small dialogues between characters, Lucky Emblems or ingredients in unexpected places, attack effects that aren't just simple explosions, but that express a greater worldview, and so on....I think that if you play while staying conscious of those kinds of points, the game will become more interesting.Q: Were there any rejected ideas?A: In the Flantastic Seven minigame, during the mission where you take pictures of the Orange Flans at crucial times, there are flans that make a beautiful dive from a tree, hit the ground and turn into pancakes. Actually, in the initial proposal, they were planned to turn into not pancakes, but monja-yaki (note: monja-yaki are a type of savory pancake-like food famous in the Tokyo area; kind of like a counterpart to Osaka's okonomiyaki). However, when we looked over the proposal again more calmly, we realized that if they changed into monja-yaki, they would just turn into a mess when they hit the ground, among other problems, so they were changed to pancakes with a yummy-looking fruit topping. The fact that the flans are kind of strange creatures didn't change, but having them become pancakes and giving them a connection to "dessert" made them more charming, I think.Q: Please give a message to the fans.A: Although the theme of the KH series is "the connection of hearts", after working on KH3, I truly felt the strength of my connections to various people in real life, not only in the game. Especially thanks to the fans, who always give me a lot of power from their warm encouragement, I think I was able to use my full power and dash forward from the start of development to the end. From the bottom of my heart, thank you!BONUS! "A secret about the game only you know"In order to test out the feeling of truly being on theme park rides for Attraction Flow, during the first stage of development, we put in a personal point-of-view camera mode. From the results of allowing different people to play it, its reputation was bad, so it was changed to a camera looking downwards from above, but actually, even now, if you press R3 [(PS4) or pressing down on the right stick (Xbox One)] while using Mad Tea Cups, Merry-Go-Round, or Splash Run, it will change to a personal point-of-view camera. For people who want to feel like they're really experiencing the ride themselves, please try it out, but beware of 3D motion sickness.....

We have posted some pictures of the trick that Yasue mentioned in our gallery. You can check them out below.