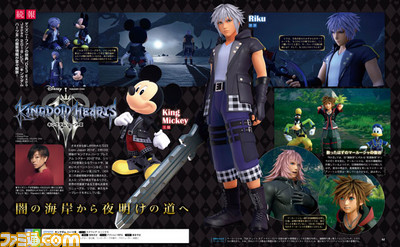 Kingdom Hearts III will be featured in the next issue of Weekly Famitsu. This issue, releasing on February 22nd, will contain information about the Monsters, Inc. world, which was announced during the Kingdom Hearts Fan Event at D23 Japan 2018 in form of a new trailer, along with the 'Link' system. You can view the teaser scan below. 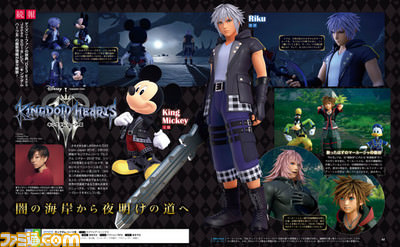 Here is the summary of the article. (Translations by KH13 Staff member Mio-chan)

During the Kingdom Hearts Premium Theater 2018 held on February 10, 2018, new informations have been revealed to the public. Famitsu March’s issue will summarizes the informations.

Informations about the new world Monsters, Inc. , Riku & King Mickey’s costume and hairstyle, and battle scenes showing the Link system (among others) have been posted.”

UPDATE [Feb 21, 2018]: The March 8th edition of Weekly Famitsu has been released. Kingdom Hearts III appears in a 6-page spread with a recap of the D23 Japan 2018 Monsters, Inc. trailer and D23 Japan 2018 "Don't Think Twice/Chikai" trailer. You can view the scans in the gallery below.

One interesting piece of information that was mentioned was the Link system. We have a translation of this part, which you can read below. (Translations by KH13 staff member Mio-chan)

"In KH Birth By Sleep, the Dimentional Link system allowed you to temporary borrow the power of a distant ally. Fulfilling certain conditions, Ariel and Meow Wow (among others) who have connected to Sora’s heart will appear and do various effects."