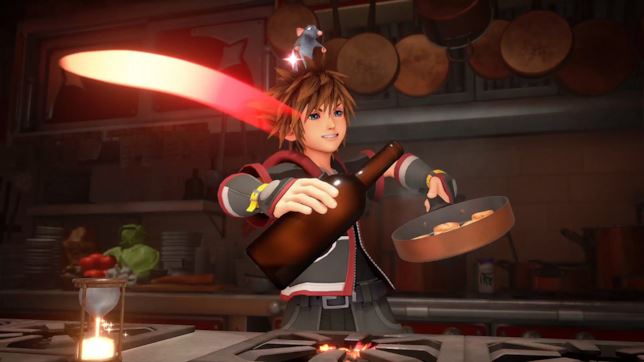 Nomura talks about Minigames, Tangled and Frozen worlds in the latest Famitsu issue

The lastest Famitsu issue of July 21 featured an interview with the director and creator of the Kingdom Hearts saga, Tetsuya Nomura. Nomura had the chance to share new information concerning the Kingdom Hearts III minigames, as well as Tangled and Frozen World. The interview is now fully translated thanks to our member Mio-Chan, and you can check it down below:

Golden frame: Xemnas strongly encourages Sora to resurrect Roxas. Even if Sora knows that the True Organization XIII is trying to use him to bring Roxas back, Sora still want to resurrect him.

White bold text: In order to put some light on the decision regarding the release date, we look deeper into the contents of this announcement and directly asked Mr Tetsuya Nomura [about this]. We also asked about the facts heard at the Media Preview Event held in May.

Small golden text: What is the story behind this change?

——Several announcements have been made at E3, but first about the release date, please tell us the reason why it is deferred.

Nomura: Because KHIII is a big title, we have continued to adjust various parts with their respective departments. Among this, New Year's Holidays restrictions would likely occur in terms of distribution and production, so it was hard to prepare a sufficient organization to release it worldwide. Plus, we would like to have the same timing with affiliates and overseas branch offices, almost releasing at the same time as Japan, so January was preferable and intentional.  On the other hand, in terms of development progress, it was never a situation that I could afford. Based on these various circumstances, it eventually became a company decision. (Note: You can read Nomura's comments on this matter in the Mobile01, The Verge, and GNN interviews as well.)

——A complex decision indeed. Well then, we will ask now about the trailer and the new information it revealed. Frozen was presented as a new world at last, right?

Nomura: Here, this scene in progress that you see occur at the same time as the movie’s events. The Let It Go segment will appear too. In terms of battle, although Anna and Elsa do not join the party, the creature that Elsa has created with her magic, Marshmallow, will lend you its strength. In the snowy mountains, there is some exploration in the ice labyrinth prepared by Larxene.

——A Pirate of the Caribbean world appeared too, such a surprising announcement!!

Nomura: About the world of Pirate of the Caribbean, we used the movie "At World’s End" as a base. KHIII sets the stage during the third movie of the series, events of the second movie will be summarized. In the second movie “Dead Man’s Chest”, the “box” is a key element to the story as the title mentions it (Note: He is referring to the “Chest”], this time it is linked to the “Black box” that Maleficent and the True Organization XIII are looking for.

—— Is the “Remy’s Delicious Restaurant” scene we saw in the trailer a mini-game?

Nomura: Following Remy’s instructions, you cut the ingredients, you cook them and create a dish, and if you succeed it can give you a status effect. If you fail, it shrivels and burns (laughs).You can play it in Twilight Town, you will to need to gather ingredients you can find in various worlds to make dishes.

—— In the Tangled world, it seems there is a dance mini-game during the dance sequence.

Nomura: It’s a “rhythm” mini-game. Cooking with Remy is one thing, but the staff also wanted to “do this kind of things” for the mini-games. Alternatively, should I leave Mr Yasue (Tai Yasue, Co-director) doing it under the pressure? (laughs). When it comes to our working place, things are basically put in place without stopping.

——Putting 20 different mini-games in the Classic Kingdom surely was your plan Mr Nomura?

Nomura: That’s right. I wanted to put as much as possible (laughs). Even though there are recoils that are handling a lot of titles’ high spec, I had a fondness for this kind of thing from the beginning. Actually, I wanted to make it for each LSI on devices. But since it’s difficult to currently do it, I have implemented it in the game. Each game of the Classic Kingdom are hidden in various worlds, and it’s possible to play them on Sora’s Mobile Portal device.

Very small text at the bottom:

(In blue) Interview on the Theme Song “Oath”

(In white) When Mr. Nomura asked about Hikaru Utada's impression of the theme song Chikai, she answered, “For example we can take my first work Hikari which has a very straight forward meaning, but in comparison Chikai doesn’t come as a strong “boom” that sets loose - it’s a complicated composition, I’ve got the feeling of really getting into it when I listen to Chikai repeatedly. It’s such a lovely song.”

Golden text: Aiming for battles with a wide range of strategies

What are your impressions on those new minigames, and on this new Mobile Portal device? Be sure to let us know in the comments!