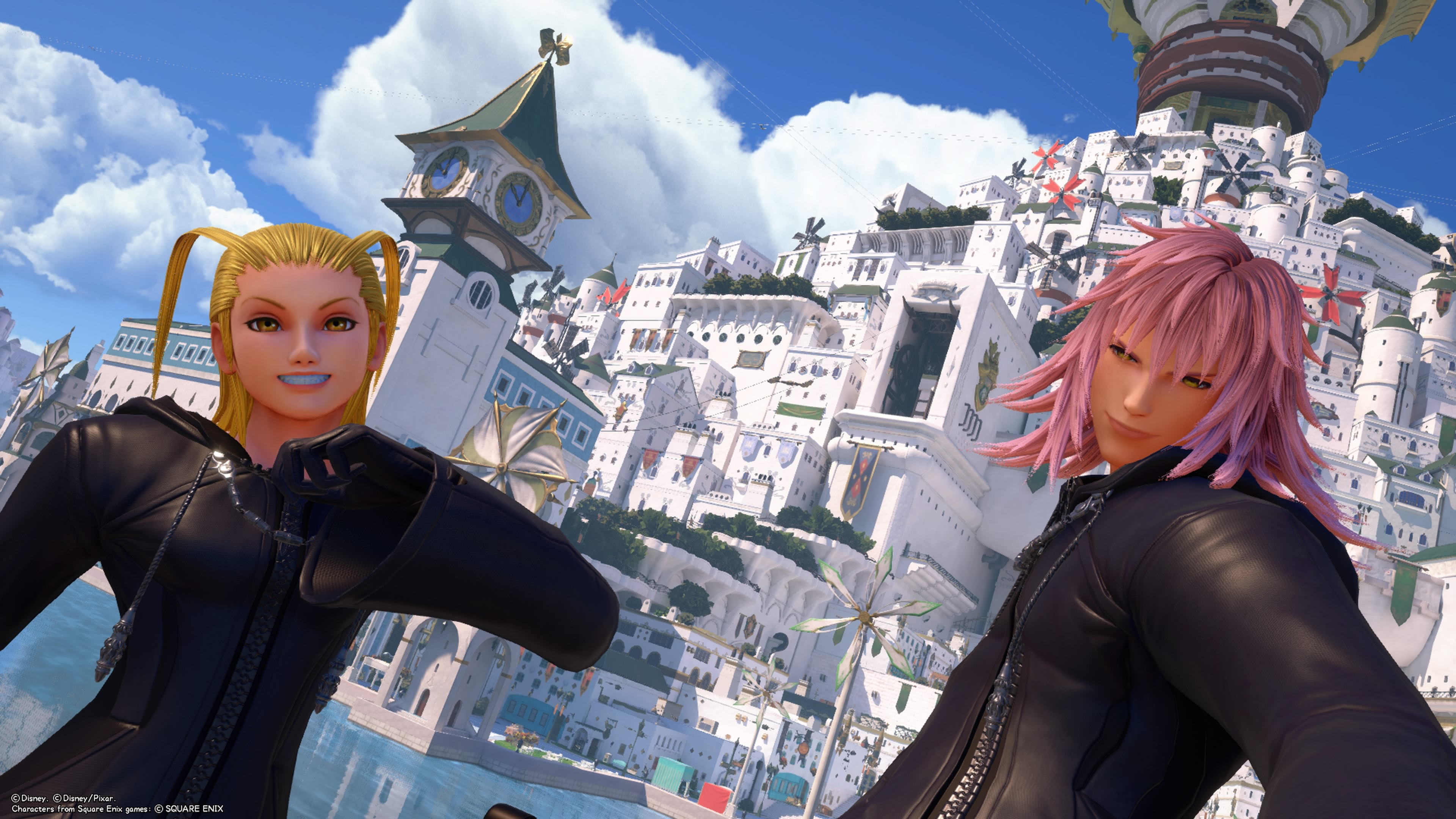 The Kingdom Hearts Series Character Files has received more story translations. All of translations this time are courtesy of Twitter user petalscythe!

You can purchase the book for ¥3,080 (approx. $28.03) from the Square Enix e-Store directly or from AitaiKuji, who deliver official and exclusive Japanese pop culture products worldwide!

The translations for Larxene's Story are below.

My true goal is to keep all this hidden away to the very end.

What, too many secrets for you? Can you blame me? It’s not like I had a heart. They’re always going on about hearts, but truth is, it doesn’t really matter to me.

But, well… by nature, hearts are ambiguous. So researching them in the first place is already questionable at best! I really don’t get why they even bother. Wearing those white coats and blabbering on about this and that, it makes me sick. And I can’t stand people who look down on others. And I can’t say I’m thrilled by the one who’s always hiding one eye. I mean, they say eyes are the windows to the soul. And then there’s the macho one! I hate beefcakes, too! And then beards! They give me the creeps~! Speaking of beards, I don’t like tricksters, or that guy who never says much but is always whirling his lances around, and I hate the one who just plays his stupid instrument all the time.

Huh? I’ve just been talking about things I hate, but… don’t love and hate come from the same place? It’s not like that’ll be interesting to talk about. Well, I guess it could be. Things I love… What can I say I like—oh, that’s right, I don’t like anything. Everything sucks. So, if I say I hate something, I don’t want anyone getting the wrong idea that I have any special feelings about it or anything like that. And I always do things for my own sake, so I have no interest in being used by anyone.

*Sigh*, it was so much better when I had no heart. When I didn’t have to worry about things like liking someone.

Becoming fond of something is painful. That’s why those feelings were taken advantage of. For example, wouldn’t it suck to not be able to have your favorite ice cream anymore? It would be better if you’d never liked it at all, right?

There’s nothing I hate more than losing. And being deceived. And not knowing things.

*Sigh*, I really hate being a human again. If I’d known this would happen, I’d have never gone along with him. I can’t even use the excuse of having no heart anymore.

What excuse am I going to give now? That’s a secret I haven’t even settled on yet. Why should I have to tell anyone anything about what’s in my heart?

The really precious thoughts are tucked away deep inside me, but it’s not like I’ll forget them or anything.

Once my heart came back, what was precious to my heart returned to me as well. But I don’t love or hate those things. I won’t tell anyone about them. After all, I hate loose-lipped people.

So, it’s a precious little secret, just for me.

The translations for Marluxia's Story are below.

Who am I and why do I exist in this world? I knew the reason.

Before, I had even forgotten my own name. I was anxious. I was exactly the same as Roxas when he first came to the Organization. But I had power.

So, of course, how ironic that I would be entrusted with the castle that rules over memory. When I lost my body and became a Nobody, I understood that I had lost my memory. And so, I helped with researching memories in the hopes that I would regain my own. Memories are governed by the heart, but the heart is made of memories. A heart with no memories is already an empty shell. If you rearrange a chain of memories, you could manipulate someone in any way you wanted.

I, with no memories, became Lord of Castle Oblivion. I wonder if someone planned that, but who? Well, at this point, I suppose it doesn’t matter.

I could never abide by Xemnas’s orders. I never understood why. The whole time I pretended to obey him, I was always thinking of betrayal. Perhaps that was a small piece of my heart that still lingered. Perhaps my heart was my guiding key. I still don’t understand.

It wasn’t until much later that I realized how special that castle was. Castle Oblivion was a sealed land—the place where a Keyblade Hero slept. Where he slept.

“Drown in the heart-torn world of nothingness! I shall scatter your heart to the empty winds!”

That’s what I’d said to the Keyblade Hero. Even with his manipulated memories, he still opposed me.

“You fools—you can never understand our agony!”

I awoke as that man’s vessel after the Hero defeated me the first time and met the Keyblade Hero once more.

However, I was defeated again. And the next time I awoke, I was no longer a Nobody.

I laughed in self-derision.

“Yes… My heart is remembering how to feel.”

I answered his question, pressing a hand to my chest.

"And now, I am on the cusp of reclaiming my identity… My purpose for being. Thank you, Sora.”

And then, my heart and memories had returned. How long had it been since Larxene said that hearts were nothing but an inconvenience? Because now, my heart is filled with nothing but dark emotions. Sorrow, pain, hatred—no, not only those. There are even things like love in this resurrected heart. But humans—or rather, I, having become human, know love and therefore also know hatred. Darkness and light are never far apart.

Now what? What should I be doing from here? Where am I supposed to go now that I’m human?

Or maybe that, and my future, has already been decided for me, and I just don’t know it.

As ever, I don’t understand anything. The one thing I know is the name of a small flower.

A heart that turns away from the truth—my own heart was bound by a chain of memories and maybe I was the one who threw away its freedom.

And thus, I was the one who lost by finding, who found by losing.

But what? My memories? Or something else entirely? I don’t even know that. But maybe it’s fine if I don’t. I finally have them in my grasp, my memories. Along with these dark feelings.

I myself drowned in the ever-blooming darkness, devoured by lightless oblivion.

But I’m done with that.

The translations for the Daybreak Town Story are below.

Daybreak Town Story
"The Story of You and Your Keyblade"

The first time I met you was by the water fountain here in town. The moment you awakened, you quickly ended up in a fight, using your Keyblade. I watched over you with the Foreteller. My name is Chirithy. I’m your spirit familiar.

“Your pursuit of light made you the perfect candidate for a Keyblade wielder.”

You listened to my explanations with a curious look on your face. It’s kinda nostalgic to think back on. After that, you went to all kinds of worlds and collected lots of light with your fellow wielders. Darkness was spreading and it was up to you and the Keyblade to get rid of it and collect light, or Lux, and keep the worlds safe. For that purpose, Keyblade wielders were split up into five unions, each tasked with gathering Lux. The leaders of the various unions were the Foretellers.

Together, we went to all the various worlds, met with all sorts of people, and helped them.

But… the atmosphere in Daybreak Town was slowly changing, and it seemed Keyblade wielders were being swallowed up by darkness. Each Chirithy is linked to our own Keyblade wielder. And I knew the me that disappeared right in front of me.

Around that time, you had a dream. A dream where the five Foretellers were gathered. And the day after that, you met Ephemer, who told you:

“The worlds we visit—the worlds of fairy tales—are nothing more than projections. The light we collect there is actually this world’s light.”

You tilted your head, listening to Ephemer’s story. Of course. Even though I didn’t really know what Ephemer was talking about, I knew at least some of it seemed to be true, because I’d seen it in your dream.

“My hunch is that the Book of Prophecies held by the Foretellers is what’s creating these holograms.”

After a little more thought, you told Ephemer that you’d dreamed of the Foretellers.

“Let’s head to the place you saw in your dream.”

Once you and Ephemer had run off, the other me appeared in front of me. I said to me, “You’re not the same colour you were before.” The other me had turned darker and I had a bad feeling about it.

In the end, you two never made it to where the Foretellers had been.

“We know how to get into the tower now, so why don’t we save the rest for another day?”

“Great! We may not be in the same union, but we’re friends, right? Let’s meet tomorrow at Fountain Square. How about noon?

You and Ephemer shook hands.

That night, you sat on your bed, smiling to yourself. You told me all about Ephemer and you seemed so happy, so I was happy too.

“You made a new friend? That’s great! I hear having friends is nice, but I wouldn’t know because I don’t have any.”

As soon as I said that, you gave me a troubled look and pointed to yourself.

You nodded. I was a little embarrassed, but I’d never thought I would be able to make a friend, just being a familiar and all.

It made me so, so happy to know that you thought of me as a friend.

The next day, I don’t know how many hours you waited at Fountain Square, but Ephemer never showed up. You looked so sad.

“A friend always keeps their promise. Maybe he had an emergency. You should give him the benefit of the doubt.”

Even so, you still looked upset.

I reached up and held your hand. Then you scooped me up and hugged me tight.

But the atmosphere just kept getting worse. Things kept happening all around you—and then you met Skuld, another one of Ephemer’s friends.

“No matter what union you’re in, they all have the same goal: to protect the light. But somewhere along the way, people started wanting to get better than others, to collect the most light, and their goals have changed,” Skuld said.

During your search for Ephemer, you and Skuld came to know of the plan for the world after. The Dandelions, a group that Ava had created, would ensure that Keyblader wielders still remained even after the end of the world. But you chose not to join. Of course, that’s just the kind of person you are. I knew that.

And so, the end of the world—the Keyblade War—began.

You collapsed after fighting the Foretellers. And soon, Ephemer and Skuld were before you.

Ephemer reached out a hand for you.

Your world was enveloped in light and you drifted to sleep.

When you awoke, what kind of world would it be? That was for you to decide.