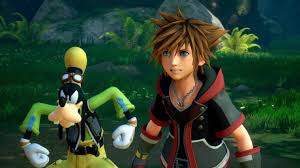 Tetsuya Nomura, the game director of the Kingdom Hearts saga, recently confirmed, during an interview at the E3 with The Verge that he and the whole team are putting "equal efforts" into both Final Fantasy VII Remake and Kingdom Hearts III, as both projects are being developed in parallel.

“We are developing [Final Fantasy VII] in parallel, and it’s not just in the early concept stages, we are actually in development"

Concerning the release date issue that recently came out, according to Nomura the game wasn't delayed because it needed more time:

“We were told by many people, including hardware manufacturers, sales teams, marketing teams, that it just wasn’t good timing in the year," - and when Square Enix pondered the “very tail end” of 2018, the holiday season became another possible problem - “For Kingdom Hearts III, the Western offices requested to release the game as simultaneously as possible between Japan and America, so we no longer were able to just think about Japanese issues and retail situations,”

The company then had to factor possibilities of retailers in specific regions closing early or offering limited sales hours:

“When we looked toward that, we were told that the best timing after all of that would be the tail end of January,” Nomura says. “We of course considered maybe speeding up the development to release earlier than we were told that it wasn’t good, but the development team said, no, we can’t do that. We could delay it, but we can’t make it any sooner. If we are to also potentially delay the release date, then we could have that extra time to work on the game a little more. It kind of just all worked together for us to decide on this date.”

Last but not least, he says that he owes a lot to his fans, which keeps him motivated to keep on going creating:

“I actually don’t like human relationships more than just work, so I just want to focus on work and creating things, if I don’t have to deal with human relationships. It’s actually a little bit easier for me to do than not working.” - also - “I do need fans to play my games, to be able to create it, and so fans are definitely a factor to motivate me to keep on going.”

We want to remember you that Kingdom Hearts III is going to be released in January 25th 2019 in Japan and Worldwide in January 29th 2019. Be sure to keep following our E3 2018 coverage on our site and on all our social medias (Twitter, Facebook, Tumblr)!