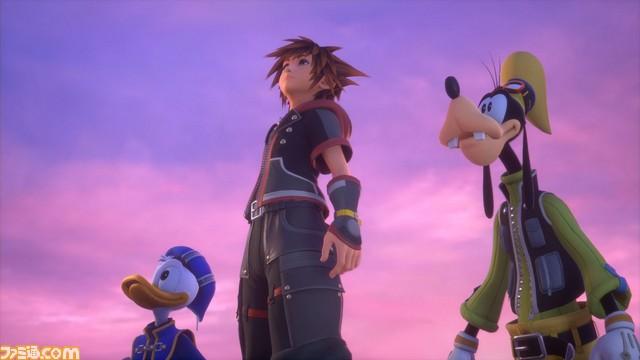 In their issue released February 27, 2019, Dengeki PlayStation has interviewed Tetsuya Nomura on various Kingdom Hearts III game mechanics, story secrets, plans for a critical mode and other future DLC, as well as plans for the future of the Kingdom Hearts series.

Interview with Kingdom Hearts III’s Director Tetsuya Nomura! What’s next after this release and what are the plans for after this title? [Dengeki: Playstation]

On January 25th, 2019 the RPG Kingdom Hearts III was released by Square Enix and has since sold over 5 million copies worldwide. The first chapter in the series was released in 2002, and with this chapter it has been 17 years since then.

Currently the game has been out for a month, and with the Dark Seeker Saga complete we are interviewing the man who created this, Tetsuya Nomura! After playing the game and after its release, we will now discuss about what comes next and where the series is heading in the future.

Please be warned, from here on out there will be spoilers for the story up to this point.

– It has been 17 years since Kingdom Hearts released back in March 28th, 2002. In Kingdom Hearts III the Dark Seeker Saga storyline that continued throughout these 17 years reached its end, and fortunately the game sold over 5 million copies worldwide. Would you care to tell us how you are feeling about how people are receiving the game?

Tetsuya Nomura: I was very pleased to see the overwhelmingly large amounts of sales including the digital downloads. Currently I am working on implementing DLC so it feels like it hasn’t ended yet, and since the release I actually am having less sleep.

– “Rage Form” bears heavy resemblance to Kingdom Hearts II’s Anti-form. What kind of settings do you have in mind for these forms?

Nomura: The mechanics of the forms this time are quite different from the forms in Kingdom Hearts II, so we decided to change all the names. Rage Form certainly has similarities with Anti-Form, but it is completely different. Anti-Form is supposed to illustrate Sora tainted by darkness, while Rage Form showcases a reckless Sora overwhelmed and controlled by his rage.

– This game does not contain the “Critical Mode” difficulty level; could you explain why this wasn’t included in this release?

Nomura: Critical Mode was never part of the base game. It was always added to the Final Mix version as a bonus content, so this time, we decided to add it as a DLC. Because it’s not simple as just editing the parameters, we are currently testing it out and adjusting the difficulty. We want this to not only be challenging, but also enjoyable.

– All the wolds in the game, especially Big Hero 6, had various daring and bold cutscenes. There are many new worlds in Kingdom Hearts III, but could you share some your most profound and memorable moments working on these scenarios?

Nomura: We worked on the plot of Toy Story for over 2 years with Pixar to make it engaging, and even after that there were many negotiations. It was the first plot we started to work on for Kingdom Hearts III, so I have many memories regarding it.

– Some of the Organization members’ name are still currently unknown. Will there be opportunities to talk about them and other things that have happened in the future, such as Isa’s scar on his forehead?

Nomura: If there is a sequel there may be opportunities but as for now, within myself, this desire exists on a blank sheet.

– Ventus and Roxas resurrection’s process was written in a way for people to easily understand it, but how was Xion resurrected and how did she join the True Organization XIII?

Nomura: I think her situation is explained within an imaginable range, but I’m planning to elaborate on it in a DLC.

– People who have completed Kingdom Hearts III were able to hear about “this kid”, which Lea and Isa are looking for. At The Final World, the existence of the two “Nameless Stars” became very intriguing. Can you give us any hints about those girls’ true identities? Are they characters that have already appeared in any work of the series?

Nomura: If you look closely you can see it in the secret reports, you might be able to tell they are characters that have appeared in a previous work of the series. The “Nameless Star” will be understood at a later time.

– What kind of place is the “Scala Ad Cælum”, which was also shown in the Final Trailer? It feels similar to Daybreak Town fromKingdom Hearts Union Cross, but is there any connection? Also, who were the people in the black clothes that appeared there?

Nomura: The connection between Scala Ad Cælum and Daybreak Town is made so it can be understood if you search and look carefully. The people in black clothes are replicas.

– Please give us a comment about the epilogue and secret ending as much as possible. We are very curious about Yoroza fromVerum Rex, who also appeared in Tox Box.

Nomura: It is a prelude to a story that will be told in the future if there are any plans after this. There seems to be various speculations about the secret ending, but it is not as simple as it seems.

– Once you finish Kingdom Hearts III, the scenario of Kingdom Hearts Union χ[Cross] becomes more and more interesting; please tell us about the future development of KHUX.

Nomura: We are close to the release of a new world. With that, the main story will also move greatly, and the parts which were a mystery until now will start to come together.

– Now, please enlighten us on the topic of if there are plans for updates and DLC. Is there a possibility of a Final Mix release or a next game in the Kingdom Hearts series?

Nomura: Until now, we would release a Final Mix version, but this time we would like to add all additional content with DLC. I think we will start with free DLC in the form of updates from whatever finishes production first, and then release a paid DLC that will come as one package. Because of that the paid DLC will take some time, but we are planning to release it by the end of the year so that the developers are able to start work on the next project as soon as possible.

As for the next game, there has been various talks about it, but nothing has happened as of now. My plans are already full for the rest of the year.

– As for the Sky Tree, the Ambassador Hotel, The Square Cafe, the special KH3 Walkman, and the World Tour concert, do you have any memorable thoughts about them? Are there more events like these planned in the future?

Nomura: The Ambassador Hotel was a surprise to me. The rest of those were much appreciated as well. I think all the special events and collaborations have already been announced.

Does this make you more excited for the future of this series? How do you feel about the mysteries that will be expanded on through DLC? Let us know your thoughts in the comments!﻿