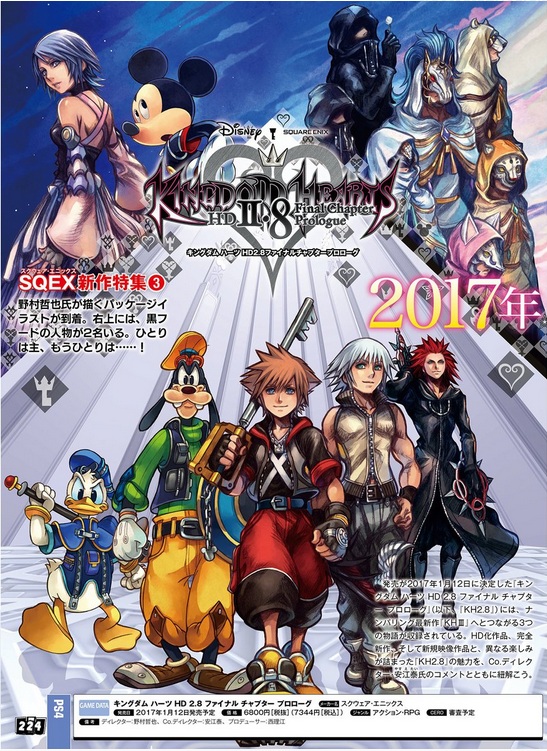 In addition to Yasue's comments, another important feature is that Chirithy, in Kingdom Hearts χ Back Cover, has been shown for the first time in his HD, Unreal Engine 4 form.

You can check out screenshots & translations from the Famitsu Weekly feature below, in our gallery.

Now, the light of the future is entrusted to young keyblade bearers--

In the beginning of the story

[KHx] served as a PC game telling the oldest story in the series' timeline, along with the smartphone release [KH Unchained X]. [KHx Back Cover] will be a theatrical animation that brings the Foretellers' discord on their side, as well as the happenings related to the mysteries of their world. Even as a short film, fans will surely call this a must-see episode in the [KH] series.

(next to hooded figure pics)

The man shrouded in a black cloak is called the Master of Masters. With his ability to see the future, he reveals that the world will soon be concealed in darkness.

(above Aced and co's heads)

The Master, who was concerned about this future, appointed five of his six apprentices to Foretellers. Why was one not given the title?

Celebrating its first year anniversary as a smart phone app!

When the apprentices (the Foretellers) received the Book of Prophecies, based on their Master's teachings, they established “unions.” However, rifts fueled by doubt begin to break apart their bonds...

A mysterious being that supports keyblade wielders in their training. It was created by the Master.

Until 9/30, there will be an additional thirty quests available. Once you clear these quests, you can earn a total of 2000 jewels!

The smartphone app [KH Unchained x] has opened an event for its one-year anniversary! If you log in by 10/1, besides just getting the “Sora and Friends Medal” and 3000 jewels, there will be special quests and several campaigns running. Check out page 228 for details!

The rumored existence of a traitor--

“What awaits us is...the keyblade war.”

A beam of light shines...

A gentle-hearted and true young woman with an air of dignity about her. She is one of the Keyblade Masters.

The King of Disney Castle. He is a keyblade wielder who is looking into the odd things happening across the worlds.

Her Wayfinder in his hand, Mickey was somehow the one who reached out to Aqua when she was swallowed by the darkness. The two of them were allies in [KH BbS].

*A playable exhibit will appear at Tokyo Game Show 2016!

At this year's Square Enix booth at Tokyo Game Show, two of the products in the compilation [KH2.8] will be available to experience. For [KHDDD], you'll be able to play about three episodes from both Sora and Riku's routes. For [KH 0.2 Birth By Sleep -- Fragmentary Passage] (hereby known as KH0.2), you can experience the lower city of Cinderella's Castle. These two products, along with [KHx Back Cover], are a must-see!

There is also a scene with Aqua lost in a mysterious place, where the floor is a mirror. Besides just the story, the gimmicks of the stages and the beauty of the visuals grab your attention.

[KH2.8] is a product we've created with many deep emotions that differ in tastes. There is [KHDDD], in which you bring along the adorably ugly Dream Eaters and dash through colorful worlds. [KHx Back Cover] illustrates the points of view and disputes of the Foretellers. In [KH0.2], you adventure through the realm of darkness while solving mysteries and fighting terrifying bosses. [KH0.2] is especially intense. We aimed to create a “last dungeon” feel with the same cutting-edge engine [KHIII] will run on, so that even casual gamers can enjoy it, and it's amazing to see the scale of the scenery, and the movements of the giant vortex made of shadows! The game system has elements taken from both [KHBbS] and [KHIII] in it, and we are quickly working on the ramified actions based on terrain and fighting style. Since you will be able to play a part of it at Tokyo Game Show, please try it out, and experience the new [KH] that is connected to [KHIII]!

Eliminated as a Master...

The fake here is you, and your hollow heart...

Into the lonely Realm of Darkness

The image in the mirror asks if there is any meaning left in continuing to fight. And so, Aqua must confront herself in the Realm of Darkness...

In the 2010 Playstation Portable release [KH Birth by Sleep] (from hereon, KH BbS), Aqua was trapped in the Realm of Darkness in order to save her friends. Thsi time, she continues her fight in an all-new production. You can experience the new [KH] that is facing the current era in what will be a hybrid of the [KH BbS] and [KHIII] systems.

In the Realm of Darkness, there appear to be many Disney worlds blended together. What lies before her eyes is Cinderella's castle in the Castle of Dreams world.

The Realm of Darkness is home to the beings who long after hearts, the Heartless. They've gathered into a large mass and are targeting Aqua...?!

The door to the final chapter will open

[KH Dream Drop Distance HD] (from hereon, KHDDD), is a remake of the original 2012 Nintendo 3DS release. Sora and Riku must gain strength to prepare for the coming battle, and together they enroll in the Mark of Mastery to become Keyblade Masters. The goal is to release the “sleeping worlds.” Borrow the strength of the Dream Eaters and continue forward!

A boy who was chosen to wield the Keyblade. He is energetic and bright, and always faces forward.

This production runs on 60fps for a dynamic action you can enjoy. Alternating play between Sora and Riku is another characteristic of this game.

Sora's best friend, who is always calm. He aims to become a Keyblade Master and takes the exam with Sora.

New Dream Eaters will appear, such as a Meow Wow resembling a tanuki. Other new species have been added, in addition to improved cutscene quality.

New package illustrations by Tetsuya Nomura have appeared. On the upper right, two figures are shrouded in black hoods. One is the Master, but the other is...!

In [Kingdom Hearts HD 2.8 Final Chapter Prologue] (from hereon, KH2.8), which is slated for release on 1/12/2017, three stories linked to the next number in the series, [KHIII], will be revealed. We took a look at the HD production, the brand-new game, and the all-new theatrical production that will all be included in [KH2.8], along with commentary from Co. Director Yasue Tai.

We've got a close-up look at the four new titles coming from Square Enix over the next year, from October this year until February 2017!! At Tokyo Game Show 2016 from 9/15 through 9/18 (9/15-9/16 are business days), we'll be checking out the exhibitions, stage events, and televised programming.