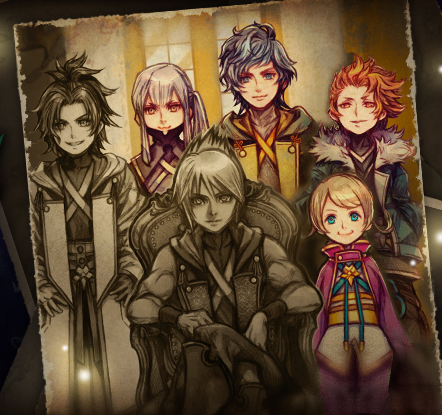 In a series of tweets on the Kingdom Hearts Dark Road Japanese and English Twitter accounts, 4 new characters have been revealed. These new characters are Bragi, Hermod, Urd, and Vor. They were teased in earlier artwork by Tetsuya Nomura.

Each of the new characters have a reference to Nordic mythology. Continue reading below for a list of each of the connections we have.

First, we have Urd. Urd comes from one of the Norns in Norse Mythology.

The Norns in Norse mythology are female beings who rule the destiny of gods and men.

Urðr (Wyrd), Verðandi and Skuld are the three most important of the Norns. Located at the well Urðarbrunnr beneath the Yggdrasil of Asgard, they spin threads of life, cut marks in the pole figures and measure people's destinies, which shows the fate of all human beings and gods. Norns are always present when a child is born and decide its fate.

Hermóðr is the son of the all-father Odin and the Goddess Frigg.
When Baldr was killed he was the only one brave enough to ride to Hel and try and bring Baldr back from the dead.

Bragi's name comes from a God with the same name.

Bragi is the God of both poetry and music in Norse mythology, he is the son of the God Odin and the giantess Gunnlod. He is known for his wisdom he is very creative with words
and he also has the most knowledge of poems and songs. His name Bragi means “Poet”. Bragi has runes carved on his tongue. He is married to the beautiful Goddess of youth Iðunn,
and they live together in Asgard.

And finally, we have Vor, who is based on Vör.

In Norse mythology, Vör is a goddess associated with wisdom.
The name means “aware” or more specifically, "Knowledge out of Darkness".
Vör was said to be very wise as she searched out all things so nothing was hidden from her. Vör also had the gift of Providence, and of preparing well for the future.

You can view a complete set of the character image teasers in our gallery below:

More information will be announce on June 10th!