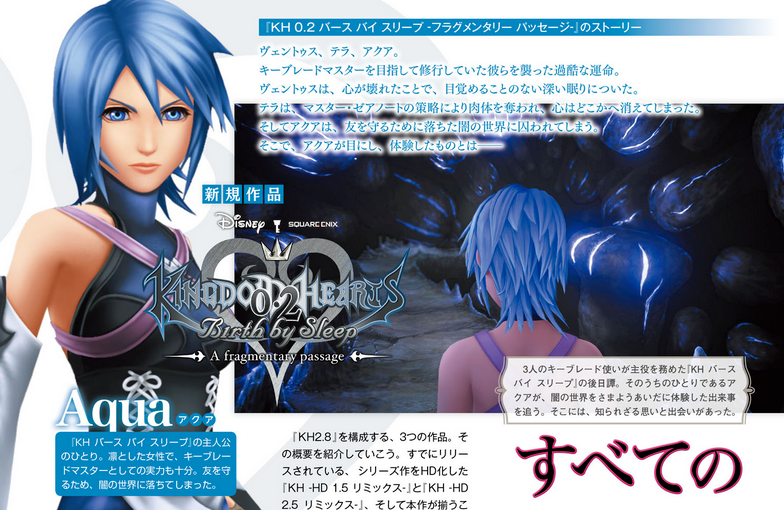 We have scanned and uploaded all Kingdom Hearts HD 2.8 Final Chapter Prologue screenshots and images from the article to our gallery, and these can be seen below. Formal translations can also be found below, thanks to goldpanner and News Team member soraspromise.

> Three works encompassing every single one of the new titles

The Kingdom Hearts (hereon KH) series, in which a deep story unfolds on a stage of Disney worlds, is seeing new activity!

[sora - Cheerful and positive, he is the protagonist of the KH series. In KH Dream Drop Distance HD, included in KH2.8, he faces the Mark of Mastery Exam.]

> Stories you ought to know before the final chapter

KH HD 2.8 Final Chapter Prologue (hereon KH2.8) is a compilation title packed with three important episodes that will connect to the newest numbered title, KH3. The content looks extravagantly deluxe, as it includes a HD remake, a cinematic work and a completely new work.

[Mickey: What you did back then--your mistakes--changed the destinies of three of my friends!]

[Riku - Sora's best friend. Despite being cool, he has unusually strong feelings for his friends. His heart was once swallowed by the darkness, but no longer. He is taking the Mark of Mastery exam along with Sora.]

> Chronological range of the compilation

A general timeline of the series is as on the right. KH2.8's KHX Back Cover is set during the same time as KHX and KH Unchained X. The time period portrayed in KH0.2 Birth by Sleep Fragmented Message is unclear, as are the connections. Is there a chance it links to KH3?

KHCoM → KH2 (about one year after)

> All events are connected

KH2.8 is composed of three works. Let's introduce them. KHHD 1.5 Remix and KHHD 2.5 Remix, which saw the series remade in HD, have already been released, and this title is the last piece of the puzzle needed to complete the story that leads to KH3. Let's play it all the way through and wait for the single conclusion to be depicted in KH3.

> The story of KH0.2 Birth by Sleep Fragmentary Passage

Ventus, Terra, Aqua. These three, who were training to become Keyblade Masters, met cruel fates. Ventus fell into a deep, unwaking sleep, as his heart had been broken. Terra had his body stolen through the schemes of Master Xehanort, and his heart vanished somewhere. And Aqua was trapped in the Realm of Darkness, where she fell protecting her friends. These are the things she saw and experienced there...

[Aqua - One of the protagonists of KH Birth by Sleep. A serious woman with the true strength needed to be a Keyblade Master. She fell into the Realm of Darkness protecting her friends.]

This is the sequel to KH Birth by Sleep, which had three Keyblade Wielders serving as the protagonists. We follow the events that one of them, Aqua, experiences as she wanders in the Realm of Darkness. There she had yet-unknown thoughts and meetings.

> The story of KH

All the worlds were one, with no distance between them. Someday, this period will only be known as a fairy tale. It all began in Daybreak Town. He is the master of masters, able to see the future. So without waiting for the future to pass, he wrote down the prophecy depicting the future of 5 of the 6 disciples. Based on the prophecy, the five disciples undertook missions from their master’s teachings and formed their own unions. After Heartless began to appear, they began to collect Keyblade wielders who shared their mindsets and asked them to collect the “light”.

“Keyblade War” has become one of the keywords of the Kingdom Hearts series thus far. KHχ is in service on PC Browsers while KH Unchained χ has just begun service on iOS and Android. The scenario of the two games are basically the same, but there has been a trick prepared. Make sure to check both!

Different dreams are connected--When you fall into a dream through a dream, it leads to the “Realm of Sleep”. Some of these worlds were visited on the first trip, but fell into sleep after being lost to darkness. Through that gate, even Heartless may not enter. Instead of Heartless, there is a new dark being in the closed off realm of sleep. It is necessary to take preparation to fight against these dark entities. So both Sora and Riku must pass the examination to be recognized as Keyblade Masters. To gain new power, they must explore the realm of sleep and unlock sleeping keyholes. Equal to the number of light, they must unlock 7 keyholes to be able to return as a master.

This is a HD remake of the Nintendo 3DS title KH3D, in which Sora and Riku travel the Sleeping Worlds. It seems as though the gameplay that made use of the 3DS lower screen will be reworked for a single screen without feeling off. We are interested to find out whether there will be new elements.

[C'mon, Musketeers. We've got a princess to rescue.]